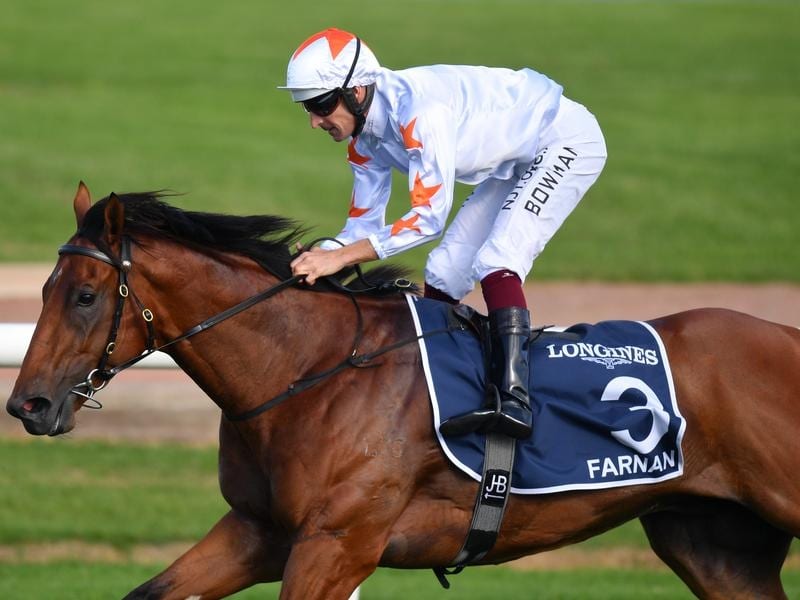 Star colts Farnan and King’s Legacy offered a tantalising glimpse of what’s in store for the spring with impressive barrier trials at Randwick.

Golden Slipper victor Farnan showed his customary early speed before powering away to an emphatic 3-3/4 length win over Shout The Bar, with King’s Legacy driving late for an eye-catching fourth.

Farnan’s co-trainer Adrian Bott was delighted with how the brilliant colt went through his paces in Tuesday’s 1050m open trial, which boasted nine stakes performers.

“He was given a bit more of a test this morning. It was his second trial and great to see the improvement and how he responded when Hugh (Bowman) asked for an effort,” Bott told Sky Thoroughbred Central.

“That freshness went out of him after his first trial. When he clicked him up and asked for an effort the response was immediate.”

It was also the second trial for dual Group One winner King’s Legacy who was restrained early by Jason Collett then given a rev-up late.

Collett has been booked to ride the Peter and Paul Snowden-trained three-year-old in his return to racing.

“I was really happy with his trial. They were probably a bit nippy for him,” Collett said.

“Peter (Snowden) asked for a good hitout today. He should be nice and fit for his first up run.”

Both colts are scheduled to resume in The Run To The Rose (1200m) on September 12 before tackling the coveted Group One Golden Rose (1400m) a fortnight later.

This year’s edition of the Golden Rose is shaping as one of the best on record with the likes of Queensland marvel Rothfire and boom three-year-olds Anders and North Pacific also targeting the $1 million feature.

Also in the mix are unbeaten colts Doubtland and Peltzer as well as Golden Slipper placegetter Mamaragan, the trio all among nominations for the San Domenico Stakes (1100m) on Saturday.

A win for Farnan in the Golden Rose would see him become the first horse eligible for the rich bonus on offer in next year’s $7.5 million Golden Eagle, the final leg of the Golden Slam.

Another interesting runner at the Randwick trials was former Hungarian champion stayer Nancho who is now with Anthony Cummings.

Nancho has won eleven of 18 starts, including Europe’s final Group One of the season, the Grosser Preis Von Bayern (2400m) at Munich in November.

He warmed up late to finish sixth to Yardstick in his 1200 metre heat.