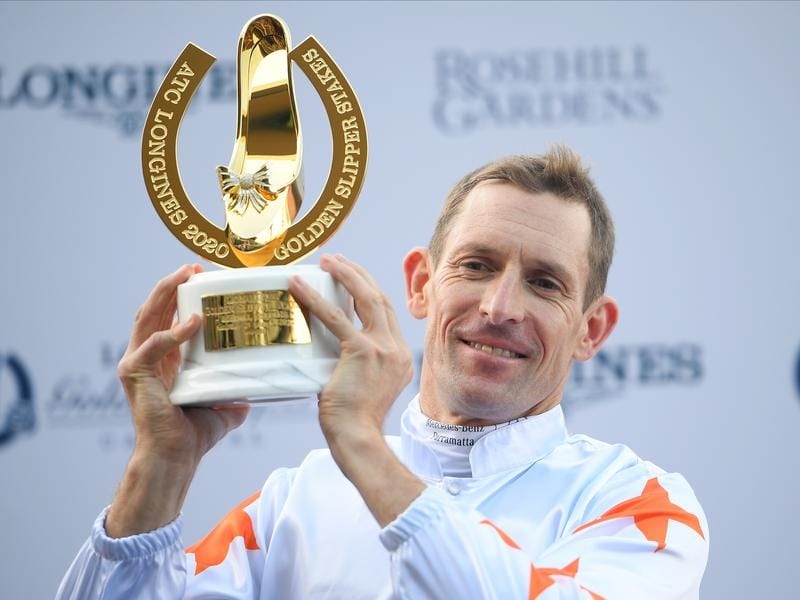 Champion jockey Hugh Bowman will ride in a race for the first time this season, and just the third time in almost three months, when he returns for a select book at Rosehill.

Bowman has been sidelined for six weeks by a careless riding suspension incurred over the fall that left jockey Andrew Adkins with several broken bones.

The incident took a toll on all involved, including Bowman.

“What’s happened has happened. There were no winners out of the situation,” Bowman said.

“All I can do, all anyone can do is move forward and that’s what I’m doing and I’m sure that’s what everyone else involved is doing too.”

Bowman has five rides on Saturday, his return coinciding with that of Golden Slipper winner Farnan who resumes against a crack field in The Run To The Rose (1200m).

He is first up and taking on some race-fit rivals including exciting colt North Pacific, Slipper placegetter Mamaragan and Peltzer but Bowman is unperturbed.

“I don’t think he’s vulnerable. I think he’s the one to beat and I’ll be surprised if he gets beaten,” Bowman said.

While he admits the first time he saw the Tulloch Lodge colt as a three-year-old the horse didn’t take his breath away, the jockey says that quickly changed.

“He hasn’t grown a great deal but I feel he has furnished since he’s been in work, as a lot of these top-class horses do,” Bowman sad.

“Any doubts I had were certainly put to rest when I rode him in the trials.

“The way he progressed from the first trial to the second was encouraging and I’m really looking forward to riding him on Saturday.”

Also among Farnan’s rivals is King’s Legacy, who Bowman partnered to autumn Group One wins in the Sires’ Produce and Champagne Stakes.

The jockey had to make an early call on which colt to ride and admits it was a tough decision.

“It’s an enviable position to be in and I’m so proud of both horses and what they did as two-year-olds,” Bowman said.

“I can’t see any reason why they can’t both continue at that level as three-year-olds.”

While Bowman feels Farnan will have the wood on King’s Legacy over a sprint trip, he won’t be surprised to see the Peter and Paul Snowden-trained colt perform fresh.

“I am a bit suspicious he might sprint very well this time in with the small field,” Bowman said.

“He ran very well first up in the Golden Slipper last time, it was a big field and I think he’s more suited to this set up.