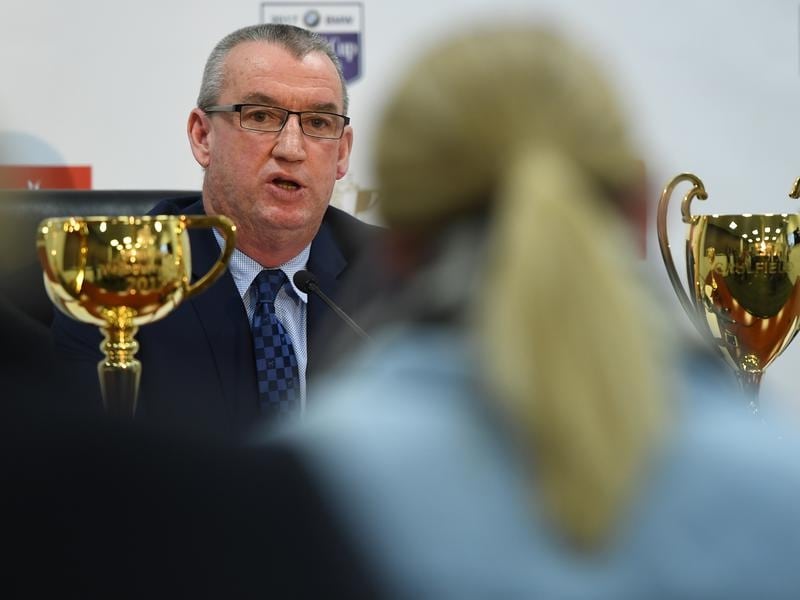 Racing Victoria chief handicapper Greg Carpenter says he faces a difficult 12 days as he wrestles with the weights for the Caulfield and Melbourne Cups.

International entries for the Melbourne Cup rose from 31 in 2017 to 50 this year and from 22 to 27 for the Caulfield Cup with nominations received from England, Ireland, Scotland, France, Germany and Japan.

Overall the Melbourne Cup has attracted 183 entries, up from 140 last year and the Caulfield Cup 164, an increase of 22.

Compounding the issue for Carpenter in the Melbourne Cup is the quinella pairing from last year, Rekindling and Johannes Vermeer, will not be back.

“It’s the first time for the Melbourne Cup since Fiorente won in 2013 that the winner has not been entered,” Carpenter said.

“And in the 14 years that I’ve been doing the weights the only other time was in 2006 when Makybe Diva wasn’t nominated after winning her third Melbourne Cup.”

Last year’s Caulfield Cup winner Boom Time has been entered and will attempt to join Poseidon (1906-07) and Rising Fast (1954-55) to win the race back-to-back.

Boom Time is not among Melbourne Cup nominations after finishing 15th last year.

While Rekindling will not be there, last year’s winning trainer Joseph O’Brien has three entries, Ming, Latrobe and Master Of Reality, in both Cups.

The latter two are part-owned by Lloyd Williams who is chasing a third straight Melbourne Cup and are part of 16 horses he has entered, 14 prepared by Liam Howley, in both races.

Germany’s 2014 Melbourne Cup-winning trainer Andreas Wohler has recent acquisition Torcedor entered for both Cups while Darren Weir, who won in 2015 with Prince Of Penzance, has 28 in the Melbourne Cup and 25 for Caulfield.

Chris Waller has 24 horses entered for Caulfield and 21 in the Melbourne Cup including Who Shot Thebarman who is in line for a fourth Cup run.