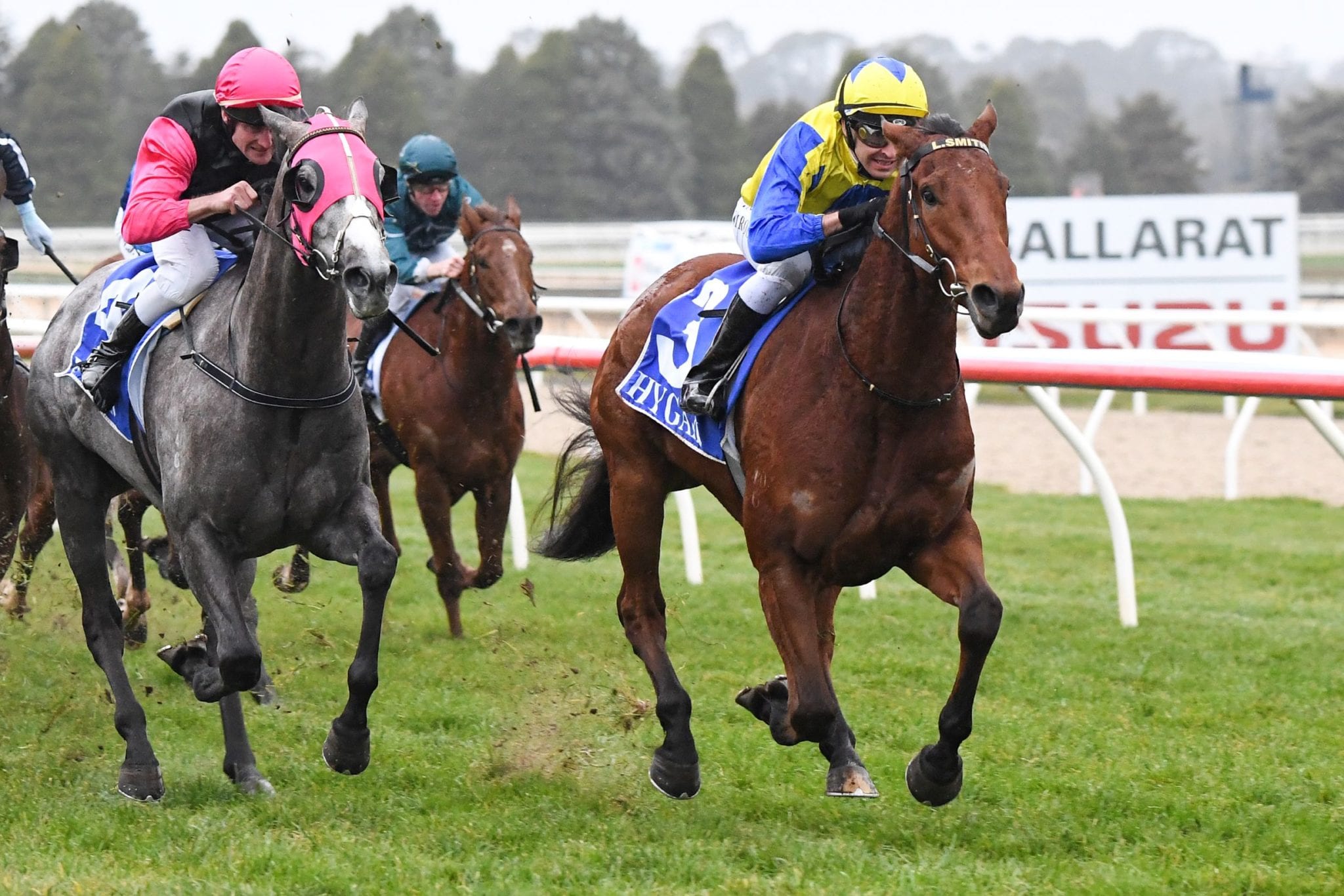 The combination of Spicer Thoroughbreds and trainer Lindsey Smith have enjoyed good success in recent weeks with horses emanating from New Zealand. That trend continued on Sunday when progressive galloper Mystery Shot kept his record unblemished for Smith, with an impressive victory at Ballarat over 1200m.

The Inglewood Stud bred gelding trialled in New Zealand on four occasions before making his debut for Smith last December with a win at Warrnambool, where he defeated smart four-year-old Dark Alley. Returning to the races for the first time since, Mystery Shot won with a bit in hand under Michael Rodd on Sunday, vindicating his connections confidence in the horse. “He’s a really nice horse,” Victorian syndicator Brad Spicer said. “He wasn’t really screwed down, so it was nice to see him come through that and hopefully we will step him up now to three-year-old Saturday grade.”

Spicer struck up a friendship with Kiwi agent Gary Carvell when attending a sale in the United Kingdom and it was Carvell who recommended the son of Shooting To Win out of the stakes performed Montjeu mare Mystique. “Gary suggested there might an opportunity to buy a nice three-year-old from over there (New Zealand) that had trialled well,” Spicer said. “We had a look at the horse and put an offer in and secured him. He showed good ability straight away. First-up he beat a nice horse in Dark Alley, who has gone on to really frank that form. “Then he went shin sore after his first start, so we put him out and brought him back and this is his second serious prep for us.”

Spicer said he and Client Relations & Bloodstock Manager Mick Sharkie were regularly on the lookout for new talent in New Zealand. “We scour the races and the trials every week and keep a bit of an eye on the situation over there,” he said. “The advent of COVID-19 has probably provided a few more opportunities for horses coming across the ditch through opportunity and prizemoney levels. “A lot of the guys over there were a bit unsure what was happening in racing in New Zealand so they were happy to trade their horses to Australia or at least stay in them and bring them across for a good crack at the prizemoney over here for the right style of horse.”

One such horse is lightly-tried stayer Kissinger, a four-year-old son of Tavistock that has won two of his three starts for Nigel Tiley and will be joining Smith after Spicer Thoroughbreds bought into the progressive stayer. “There was an opportunity to buy part of the horse and Nigel is going to stay in with his owners and send him across,” Spicer said. “Nigel gave him a solid push and said he could develop into a nice Cups horse maybe for 2021. He hasn’t put a lot of pressure on him and he’s been a late maturing horse. “Prizemoney here is great for those Saturday grade horses, if they can come here and win two or three races on a Saturday, they virtually pay for themselves if you haven’t paid too much money for them.”

Other recent Spicer Thoroughbreds sourced Kiwis include Our Wind Spirit, a four-year-old son of Per Incanto who ran third in his only start for Chris Gibbs & Michelle Bradley. Unbeaten in three starts since joining Smith, Our Wind Spirit won at Ballarat last week. “He’s a really nice horse and he’ll step out again at Geelong on Friday week, where we expect him to go well again and then we’ll take him to town after that.”

Also bound for Geelong is progressive galloper Mr Cancun, a son of Atlante, who has finished in the money in five of his six starts in Australia after being sourced from a Taupo trial placing. “There’s a nice 1400m race for him at Geelong and he should be hard to beat. If he wins then there’s an option for him at Flemington or Caulfield over a mile and we think he will be a mile to 2000m horse that will be Saturday class.”

Four-year-old mare Dee Keepa is another recent Ballarat winner for Spicer and Smith that looks set to be a handy addition. Previously a one-win mare for Taranaki trainer Robbie Patterson, Spicer spotted the mare when she ran fourth on a rain-affected Awapuni track last December. “I was actually in New Zealand at Christmas time with the family and I was watching a few replays and just noticed this horse didn’t handle the wet track that well,” Spicer said. “I rang Gary Carvell and suggested he check out the horse as I thought she had a bit of a future and we were able to secure her. “She has got a lot of growing still to do. She’s a four-year-old, rising five, but is all bum-high at the moment, a bit like a dragster. “We think she will be a nice horse at the back end of 2020.”

Spicer, who sources horses both as tried and untried stock, said there were a number of advantages in buying horses from New Zealand. “It’s a product that has been brought up and reared on some of the best country in the world in New Zealand, so you know they get a good grounding,” he said. “A lot of the Kiwi horses don’t really get thrashed as two-year-olds. They’re the style of horses we’re looking for, horses that can race at 1600m and beyond, that’s where the prizemoney levels are pretty good here in Australia. It’s all about return back to the owners.”