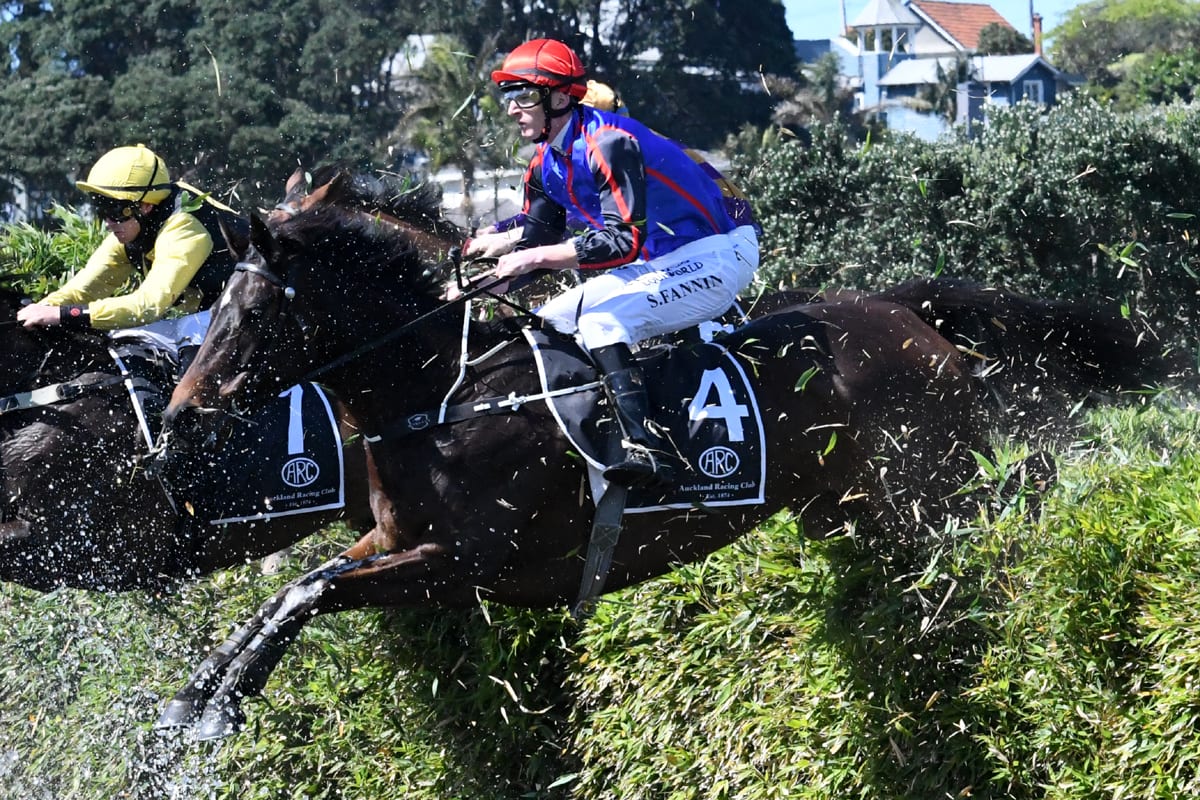 In a race full of incidents that included three runners falling shortly after completing the first of three laps in the contest, a nasty accident was narrowly avoided when the remaining five jockeys managed to steer around a group of weekend golfers, who had strayed onto the track from the nine-hole golf course on the Ellerslie infield, approaching the first of the grandstand double.

With all that mayhem happening around him, Magic Wonder’s rider Shaun Fannin kept a cool head as he controlled the pace before skipping clear down the famous Ellerslie hill the last time to scoot clear and register a dominant nine-length victory. “It was a bit of a shame for the race as you want the competition to stay on their feet,” trainer Jo Rathbone said when referring to the race falls.

“I was happy when Shaun took her to the front as she goes best when she gets in a nice rhythm, so she was happy like that. “She has to have her own little space and she jumps better like that, so I wasn’t too worried. “She jumped quite well although she landed in the water at that jump, but she was good for her as she can get a bit hairy sometimes.

“I wasn’t at all confident as you can see what can happen in the jumping game, so it wasn’t until she cleared the last fence that I started to believe she was the winner. “This is the pinnacle of jumps racing so it is very exciting. “She can go and have a good holiday now and hopefully we can bring her back again next year.”

Rathbone created her own piece of history with the win, becoming the first female to both train and ride the winner of the great race having been aboard the Davina Waddell-trained Just The Man when he scored in 2005.

Earlier on the card rider Aaron Kuru made his 500th jumping ride in New Zealand a truly memorable one when he guided the Paul Nelson and Corrina McDougal-trained The Cossack to victory in the ARC Great Northern Hurdle (4190m).

Recognised as one of the country’s leading riders over fences, Kuru was the epitome of patience aboard the seven-year-old who has never finished further back than fourth in eight starts over the jumps. Kuru had The Cossack travelling sweetly in the trail on a sluggish pace throughout before moving off the fence to challenge approaching the home turn.

Race favourite Aigne loomed into contention at that point and looked a massive chance before bungling the second last fence which allowed The Cossack to sneak clear before holding out the determined finish of Lake Superior to take the victory by a neck, with Aigne recovering to take third ahead of pacemaker Macklemore.

“He was a bit keen to start off as the pace wasn’t that strong early on,” Kuru said. “With a lap to go he settled into a nice rhythm and really travelled well after that. “When they clapped the speed on with 800m to run he was a bit flat footed but when I got to the outside in the home straight, he got his momentum going and he was really strong to the line. “He didn’t win by much but I always felt he was going to get there.”

The victory was made even more special for Kuru who was returning to the saddle after sustaining a back injury just a fortnight ago when he fell from Truman in a maiden hurdle event at Ellerslie. “I broke the transverse process in my L2 and L3 vertebra in my spine when I fell,” he said. “It was a clean break but wasn’t enough to keep me out from riding today.

“I just didn’t want to see anyone else win on this horse and I’m just thrilled I could do it for Paul and Corrina.” The victory was the fourth in the event for Nelson who had tasted success in 2002 with Chibuli and again in 2006 & 2007 with Just Not Cricket.