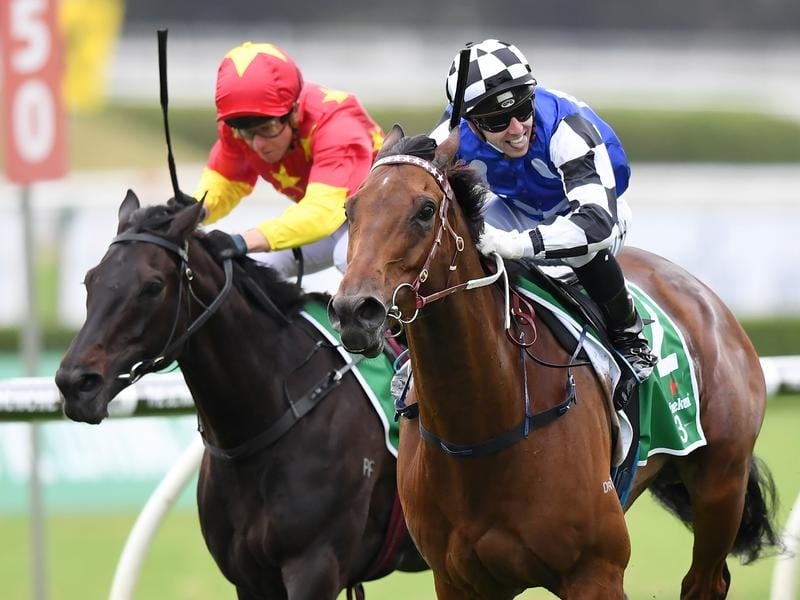 Last start McKell Cup winner Frankely Awesome has been scratched from the Grafton Cup but trainer Kris Lees is still poised to have a strong hand in the Listed race.

Lees had three acceptors for Thursday’s 2350m feature at Grafton but Frankely Awesome, who had drawn the outside barrier, was scratched on Wednesday to be saved for a benchmark race in Sydney on Saturday week.

It leaves Lees with last year’s Brisbane Cup winner Sixties Groove and Big Duke in Thursday’s race with top weight Sixties Groove heading in off a fast-finishing second to Frankely Awesome in the McKell Cup (2000m).

“I think it’s a nice option for both horses,” Lees said.

“Sixties Groove was a little luckless in the McKell Cup. You could make a case he should have nearly won. He’s going to need a bit of luck again from his draw (barrier 12) but I feel he’ll be very competitive.

“Big Duke just raced a bit fierce throughout in the McKell Cup. We used his barrier a little and we may have been better off riding him a bit more conservatively.

“I went into that race thinking he was our best chance.

“He’ll be ridden a touch more conservatively. He has come out of his last start well and at his third run in he should be ready to run up to his best.”

“Off their runs the other day you’d have to say Sixties Groove,” Lees said.

“But they are starting to get a bit of a gap between them in the weights and I have been very happy with how Big Duke has been working, so I don’t think there’s much between them at all.”

Lees said waiting for a benchmark race on Saturday week was the better option for Frankely Awesome, who won the McKell Cup on a soft track.

“She has the outside gate and I know there’s some rain around but it’s still no guarantee it’s going to be a soft track and there’s a race in Sydney next Saturday so we’ll wait for that,” Lees said.

“There is rain forecast next week in Sydney so that’s a better option for her.”