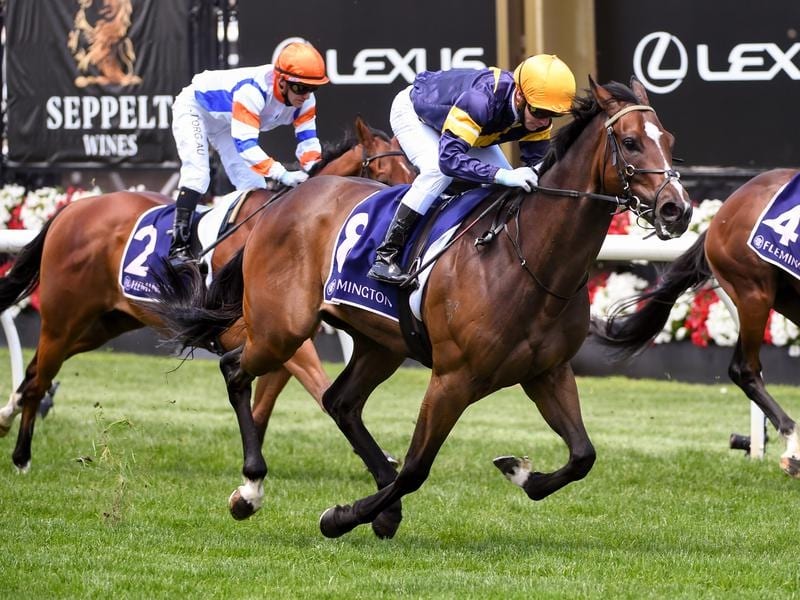 Mike Moroney will consider backing up impressive Flemington winner Shelby Cobra in the Sandown Guineas after the three-year-old’s victory in The Amanda Elliott.

“We won’t say no but we don’t usually make decisions on race day and we’ll see how he pulls up. We’ll consider all avenues,” Moroney said.

Moroney said Shelby Cobra could have won Saturday’s 1400m race by further except he wandered around over the closing stages of the race.

“He was waiting for them a bit. But he’s only new at the whole thing so that’s to be expected,” he said.

Moroney said they gelded the son of Toronado because he was prone to getting stirred up.

The win gave Moroney his 21st victory at the Flemington carnival with his first 23 years ago when Second Coming claimed the 1997 Victoria Derby.

It also gave Ben Melham his first winner for the week and the jockey predicted a bright future for Shelby Cobra.

Shelby Cobra ran down Sydney visitor Tommy Gold and defeated him by a length with Deep Speed another 1-1/4 lengths away third.

Former leading apprentice Ben Allen took advantage of his best metropolitan opportunity for a long time with a polished all-the-way win on Sansom in the Chatham Stakes .

It was Allen’s first victory at Flemington since March 2019 and Sansom’s trainer Phillip Stokes said it made the win even more special with the jockey on board.

“He (Ben) did a lot of the early work on this horse. For Ben to get a win like this, it would mean a lot to him,” Stokes said.

“He rated him lovely in front and kept on building.”

It was Sansom’s eighth win from 17 starts but his first over 1400m at his second attempt at the trip.

Stokes said he would look at taking him to the Gold Coast for the Magic Millions Cup in January.