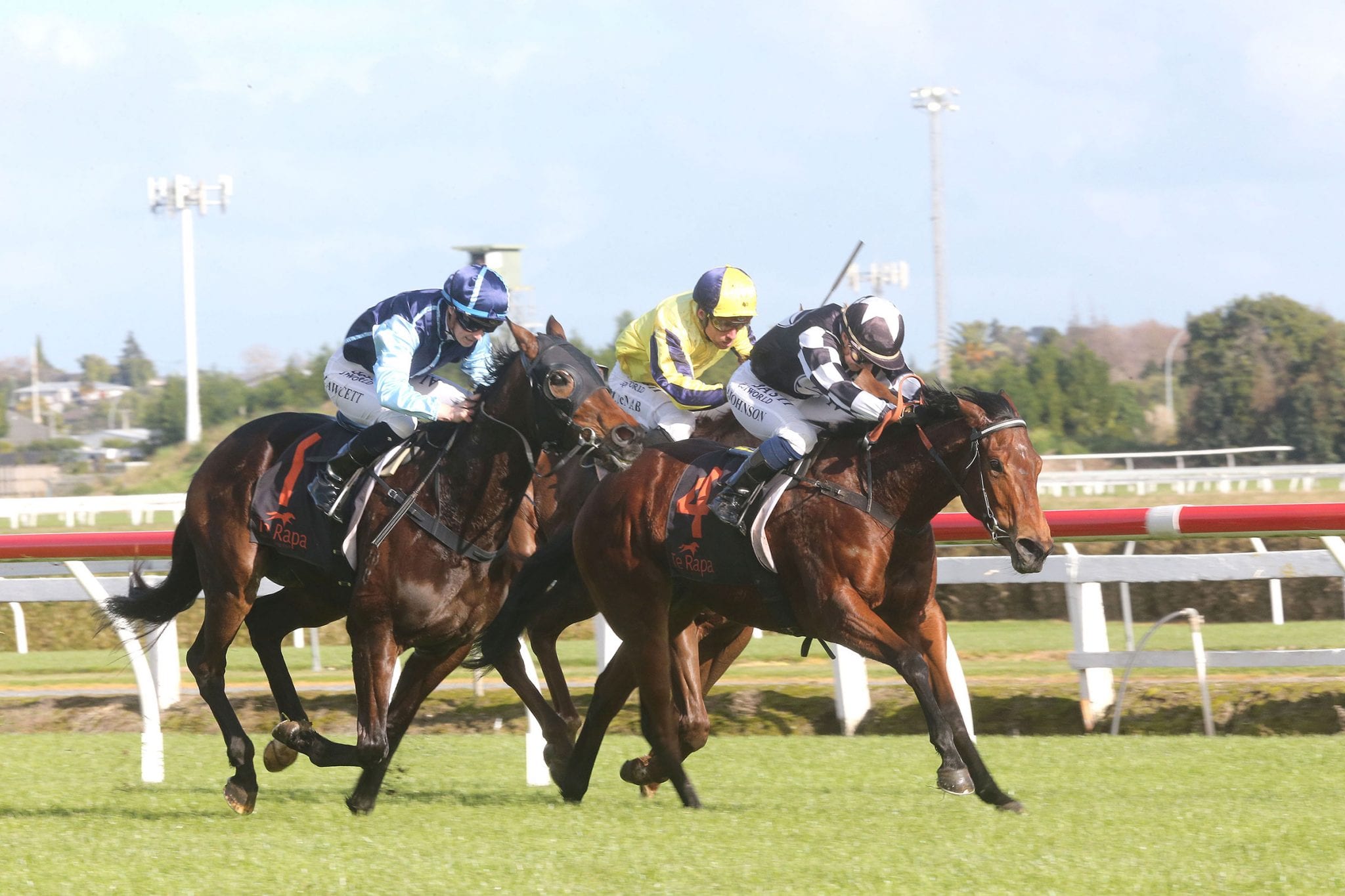 Unbeaten New Zealand two-year-old filly Catsacharmer booked herself a place in the Listed Courtesy Ford Ryder Stakes (1200m) at Otaki in three weeks after she lifted herself off the canvas to claim victory at Te Rapa on Saturday.

Having just her second career run after scoring impressively over 800m on debut at Otaki last month, the Charm Spirit filly was backed into the microscopic odds of -125 for the 1200m contest.

Allowed to stride to the front by rider Danielle Johnson, Catsacharmer looked to be in trouble turning for home as several rivals, including eventual runner-up Burgundy Dancer, launched their bids for victory.

Clearly headed by Burgundy Dancer at the 200m, Catsacharmer lifted bravely under the urgings of Johnson to snatch the lead back in the final few metres to win by a short head with Treasure State just a short neck away in third.

Allan Sharrock, who was watching on from Awapuni where he produced highly regarded three-year-old Butler for an effortless win earlier in the day, was left shaking his head in disbelief that his charge had managed to take the victory.

“That’s not something you see every day and certainly not by a two-year-old,” he said.

“I thought we were gone halfway down and there are not many babies who could do what she has done.

“I spoke with Danielle after the race and she said the runner-up had pestered her all the way, but my filly has just dug deep and refused to give in.

“I think we have to try and get some black type with her now, so I’ll set her for the Ryder Stakes at the end of the month.

“She deserves her chance and I think the trip away she has had today will help with her development.

“She will most likely go to the paddock after that for a freshen up before we get her ready for a few of those spring three-year-old races.”

Sharrock was also relieved Butler had put his best foot forward after disappointing when finishing fifth at his last start at Tauranga.

“He (Butler) is very smart, but he has a few issues as he is a big, heavy horse,” he said

“He just loves wet ground, but I was a little disappointed with him last time, although I think he was affected by the tongue tie that day.

“We put the blinkers on this time and he won as I thought he could.

“He is built like a tank and is very mature for his age, so I think he can go on with it now.

“We’ll try him in a rating 74 1200m race on Ryder Stakes day then he can step into the open ranks where he will be very competitive from low down in the weights.”

Sharrock was also happy with run of Group 3 Winning Edge Presentations Winter Cup (1600m) contender Justaskme at Te Rapa, after the No Excuse Needed five-year-old came from a clear last on the home corner to run into fifth over 1200m.

“He is building nicely for his main target which is the Winter Cup at Riccarton,” Sharrock said.

“He was run off his feet today, but got home well and when he gets up to 1600m it will be a completely different prospect for him.”