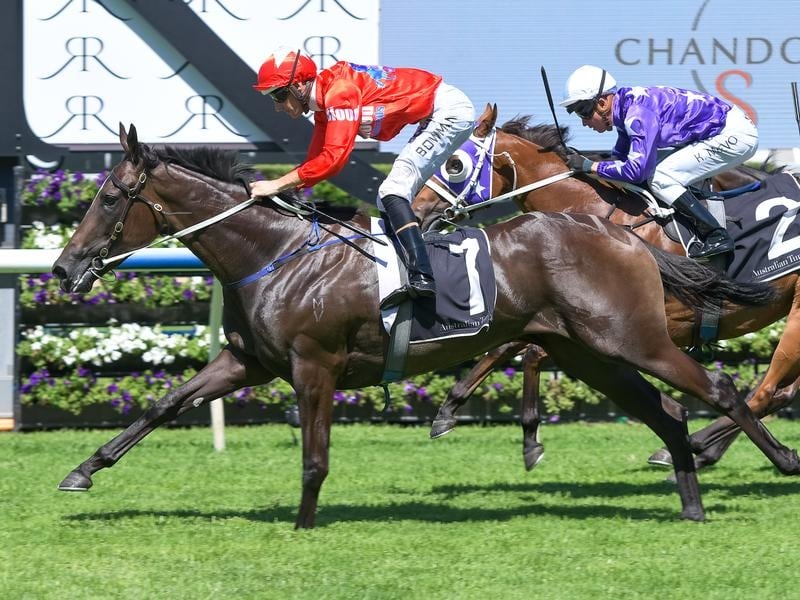 Seabrook has been given the tick of approval by race jockey Damien Oliver ahead the Golden Rose at Rosehill.

The Mick Price-trained galloper is the only filly in Saturday’s 11-horse Group One race over 1400m for three-year-olds.

Seabrook is also aiming to become the first filly to win since the race was elevated to Group One status in 2009 when she jumps from barrier nine.

Price said Oliver could be a hard marker of track gallops but said the filly was in top order for the assignment.

“On the inside grass going the reverse way she was super on Saturday morning working with Oregon’s Day,” Price said.

“Ollie rode her in a gallop on Tuesday morning and he can be critical, but he’s also a very good judge, and he got off and said she’s spot on.”

Seabrook is no stranger to success in Sydney.

She won the Sweet Embrace Stakes at Randwick on her way to running fifth in the Golden Slipper at Rosehill.

Two starts later she claimed the Group One Champagne Stakes..

At her only start this campaign, when ridden by Oliver, Seabrook finished third to Native Soldier in the HDF McNeil Stakes at Caulfield on September 1.

Both Price and Oliver said the performance was a pass mark.

“She had two trials at Cranbourne, one was average, one was OK while her first-up run was OK,” Price said.

“Ollie said she ‘used to tow me in but seems a bit different now’ but to me she’s improved out of sight.”

Saturday’s performance will determine whether Seabrook remains in Sydney for the Flight Stakes at Randwick on Saturday week or returns for the Caulfield carnival that commences on October 13.

“I reckon she’ll go to the Thousand Guineas with three weeks between runs,” Price said.

“The Flight is a possibility and she’s also nominated for the Caulfield Guineas, which might be a bit ambitious, but I think the Thousand Guineas is more her race.”

Following Tuesday’s field declaration and after drawing barrier four, Graff was the $3.50 favourite ahead of The Autumn Sun ($4.50) and Lean Mean Machine ($6).