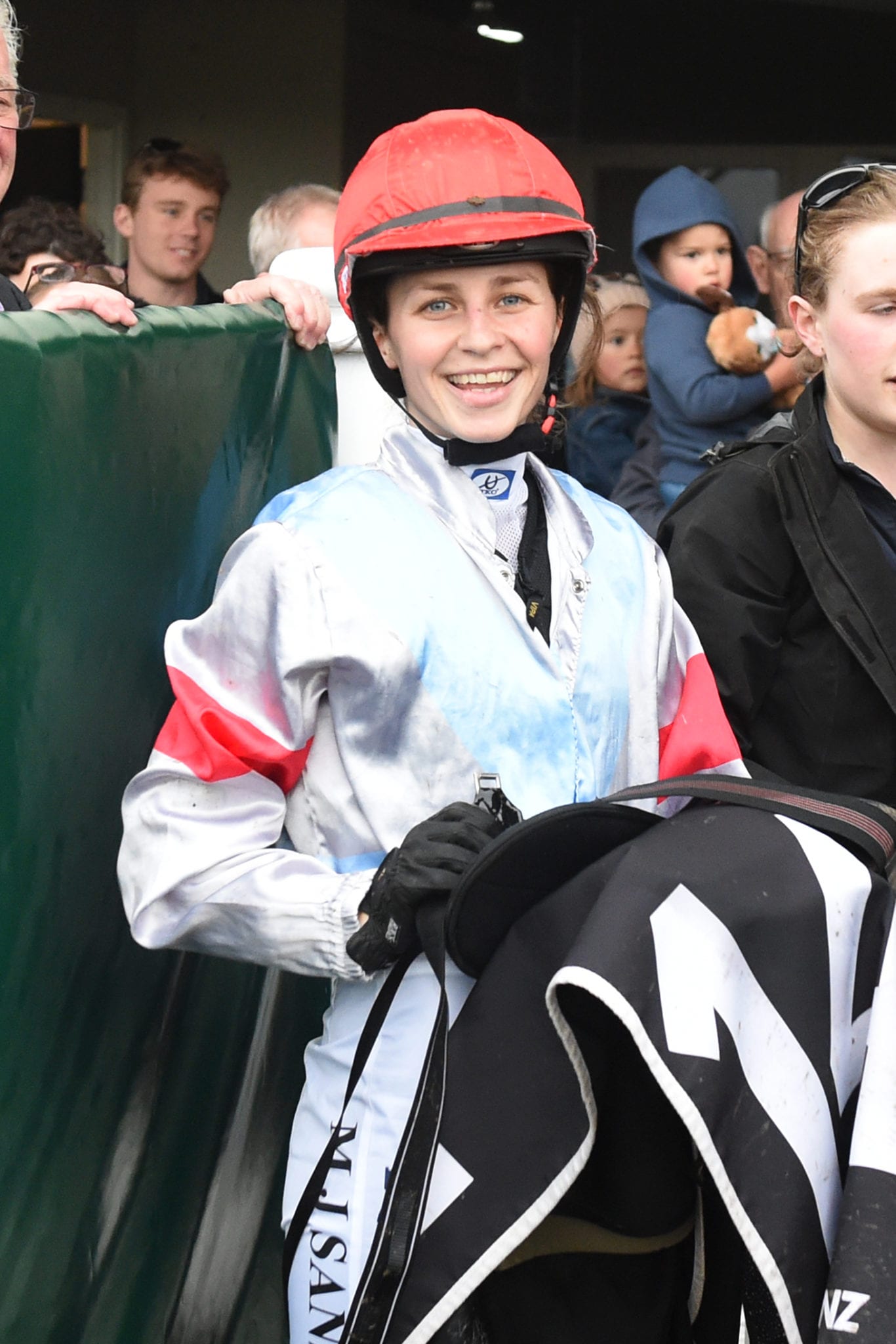 Apprentice jockey Maria Sanson kicked off her career in fine style at Awapuni on Saturday when she picked up her first career victory on her raceday debut. The personable twenty-five-year-old had earlier guided the Kevin Myers-trained Overtheriver into fifth in the main flat race of the day before she scored aboard Super Flash for her boss Mark Oulaghan in the last race of the day.

Sanson was naturally thrilled with the win although she admitted the day’s excitement had taken its toll. “I was actually in bed pretty early last night (Saturday) as I was exhausted,” she said. “The phone had been going non-stop when I got back to the jockey’s room and although I did manage to have a couple of celebratory drinks at the track I was home early for some dinner and then I just crashed.”

Sanson admitted there were plenty of nerves leading into the day but she was comforted by the faith shown in her by Myers and her mentor Oulaghan to give her the mounts to get her riding career underway. “I was pretty nervous but having my first rides for Mr Myers and Mark was really great,” she said. “Both of them just gave me the instructions to go out there and have fun, so there wasn’t a lot of pressure which was nice.

“Super Flash had shone at the jumpouts and trials and I know Mark has a lot of time for him, so I was hoping he could go well. “When we got into contention all I was thinking was please keep running Flash. “My legs were burning and when I was pulling up, they were turning to jelly. It took a wee while to pull up so it wasn’t until I got back to the birdcage that people came up and started congratulating me which was really nice. “Mum and Dad were there as well so it was a great experience.”

Like a number of apprentices Sanson got her passion for riding from her pony club days, which started in her home town of Waverley. Although her parents could see she had been bitten by the riding bug they made sure she kept up her education which saw her attend Massey University where she graduated with a conjoint Bachelor of Business and BA majoring in International Business Management and Politics degree along with a diploma in Defence and Security studies.

“I grew up in Waverley and I did the whole pony club thing,” she said. “My pony stayed at trainer Bill Thurlow’s place and his wife Fiona taught me to ride. “My parents have shares in a jumper called Justa Charlie and I had always had it in the back of my mind to become a jockey however I went to University at Massey to complete my education first. “While I was there, I rode trackwork in the mornings for Stephen Gillies and Matthew Eales and then went to classes after that. “When I graduated, Tim Johnson was finishing up his apprenticeship with Mark so someone told me there might be an opportunity available. “I rang Mark and it has just gone from there.”

Sanson joined Oulaghan’s Awapuni operation around eighteen months ago and has impressed with her work ethic and enthusiasm for the sport. “Maria has worked for us since October 2018,” Oulaghan said. “She’s made a good start with a win on her first day so you can’t do much better than that. “She’s a very bright girl and is keen to learn and picks things up well. “I think coming in a little bit older than most apprentices has helped as that maturity can make it easier to deal with the situations that racing throws up.”

While Sanson would like to put her education to good use in the future she is keen to explore where a riding career could lead her to. “Long term I would like to get involved in politics but I have forever to sit in an office all day and I don’t have forever to ride horses so that’s why I doing this now while I’m young,” she said. “I’m not sure where riding will take me and how my apprenticeship will go so it’s hard to know where I will end up but I’m just going to take each ride as it comes for now.”