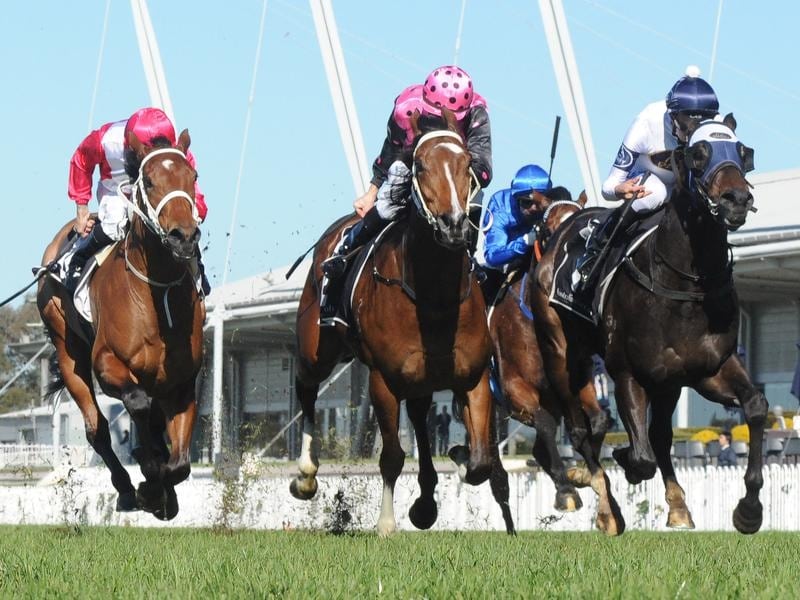 Three-year-olds Dio D’Oro and Toulouse will go their separate ways when they reappear at Rosehill after being joined together in a photo-finish the last time they raced.

The Gary Portelli-trained Dio D’Oro runs in Saturday’s San Domenico Stakes (1200m) while Toulouse, from the David Payne stable, steps out over 1400m in the Ming Dynasty Quality.

The pair met over 1400m on June 30 and could not be split but have different objectives this spring.

Portelli is keen to test Dio D’Oro as a Golden Rose contender while Payne is looking at Toulouse as a successor to last year’s Victoria Derby winner Ace High.

After some rain on Thursday night but not as much as predicted, Rosehill was in the soft range on race eve.

Dio D’Oro has won three races, two on heavy and one on soft ground.

“Obvously rain suits him but we’re keen to find out if he is just a wet tracker,” Portelli said.

“This will also be a bigger test to find out if he is up to these horses heading to a race like the Golden Rose.

The Chris Waller-trained Performer is on the second line of TAB betting for the Golden Rose (1400m) on September 22 with his stablemate, The Autumn Sun, heading the market at $6.

The Autumn Sun will also be at Rosehill on Saturday, but not to race.

The colt will take part in a race day barrier trial approved by Racing NSW as part of Hawkes Racing’s attempt to get former world’s best sprinter Chautauqua reinstated to race.

After failing to jump in six official trials this year, the multiple Group One winner must leave the gates with the field, otherwise he will be barred.

Toulouse will not be heading to the Golden Rose with Payne keen to step him up to the Gloaming Stakes (1800m) and Spring Champion (2000m) before he tackles the 2500m of the Derby at Flemington.

The gelding is an $11 chance in the Ming Dynasty with the market headed by the Tim Martin-trained Danawi who is at $4 to improve on his three seconds from three career starts.

The first of those seconds came when he was beaten on debut in April by The Autumn Sun.