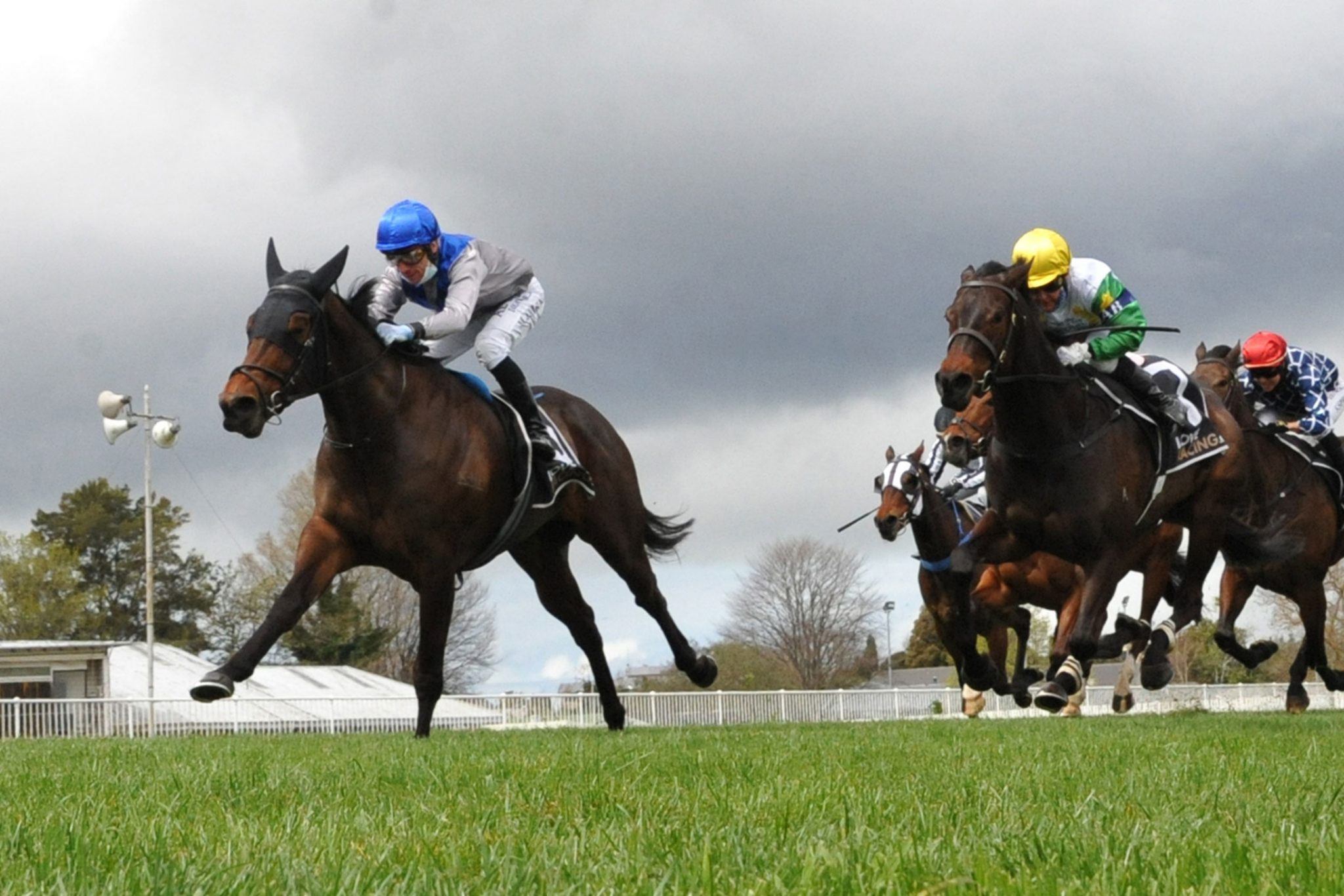 While Callsign Mav was the star of the elite horses at Hastings with his Group 1 Tarzino Trophy (1400m) victory, it was a stunning performance on the undercard that was the talk of the racing world.

Four-year-old mare Sakura Blossom had attracted plenty of attention off the back of her maiden win over 970m on the Cambridge synthetic track earlier in the month and lined up over 1200m on Saturday.

Backed into a starting price of +210, the daughter of Vancouver had her supporters cursing when she completely bungled the start for rider Michael McNab and settled four lengths behind the second-last horse.

McNab didn’t panic and took an inside path approaching the home straight before angling into the clear at the 350m to begin her home straight charge.

Still five lengths off eventual runner-up Alchemia with 150m to run, Sakura Blossom put in several huge bounds that took her to the front in the shadows of the post, with the audacity to just cruise the final few metres as she registered her second career victory.

Trainer Ben Foote admitted he wasn’t sure what to think at the start of the contest and had nearly given up on his charge approaching the home turn.

“Ever since I’ve had her she has always been slow away from the gates, so it wasn’t a total surprise she was again, but I didn’t expect her to miss it by as much as she did,” he said.

“Approaching the home turn I saw Michael taking her up the rail and I lost sight of her, so I wasn’t too sure where she was and what was happening.

“It was a bit of a shock in that last bit to see where she was and then what she did, although I’ve known for a long time that she has untapped ability.”

It wasn’t the first time that his charge has given Foote a shock as he recalls how he first set eyes on her during the 2019 Ready To Run Sale at Karaka, where she was ultimately purchased by Upper Bloodstock for NZD$150,000 out of the Phoenix Park draft.

“I do a fair bit of work with her owner Ross Lao and the guys from Upper Bloodstock and we were at the Ready To Run at Karaka when they came up to me and asked me to come and look at a horse,” Foote said.

“I’ve never looked at a filly for them as they generally only buy colts and geldings, so when this tall, leggy filly came out I got a bit of a shock.

“They asked me what I thought and I told them I thought she was a ripper but asked why they wanted to buy her.

“All they said was we want to buy her for you, you train her and win a Group One with her.

“So, no pressure at all really.”

Foote went about his work and soon discovered that Sakura Blossom’s ability matched her looks and after winning a trial in October last year, the Cambridge horseman was ready to set her for a raceday start until fate intervened.

“I was taking Vitesse Bo down to Riccarton for the Cup Carnival and I had her x-rayed before she went,” he said.

“I decided to get this filly done as well and it came back showing she had a chip on her knee that had to be removed.

“That put paid to getting her to the races then, so we backed off and brought her up slowly before she stepped out at Cambridge for her first win.”

Foote will now form a plan to get some black-type on the mare’s CV but will take his time as he tries to improve her raceday manners.

“She is not badly behaved at home although she is a tough nut and a big unit at around 550kgs,” he said.

“She has her quirks, which I think will improve with racing and just some more experience under her belt.

“Her pedigree suggests she is an out and out sprinter, but you’d have to think she will get a mile the way she can relax and then produce that phenomenal sprint finish.

“At this stage there is another special conditions maiden back at Hastings, which will be ideal for her and then I think we can get serious on that black-type plan.

“Clayton Chipperfield rides her in all her work and he got off her one day and said she needed to gallop with something like Catalyst to see just how good she was.

“That is pretty exciting, so I think Ross and the boys will be having plenty of fun with her over the next few months.”

While Foote is delighted to have such a gifted individual in his care he is also busy with several of her talented stablemates as they make their way back to racing trim for the new season, including Group 3 Cambridge Breeders’ Stakes (1200m) winner Babylon Berlin.

“Babylon Berlin is having a trial at Cambridge on Tuesday as we start to get serious with her,” he said.

“There is not a lot around for her at the moment, but her long-term aim is the Railway (Group 1, 1200m) on New Year’s day so we will just tick her over as we build up to that.

“Travelling Light has had surgery on a fetlock, which has tidied that up 100 percent, so I really think this will be her year when we get her back.

“She has spent some time here and on the water walker and is back in work now and I’m really happy with her.

“I’ve also got four or five for the Ready To Run Sale at Karaka in November plus some really lovely young horses coming through, so there needs to be a few more hours in the day to keep on top of everything at the moment.”