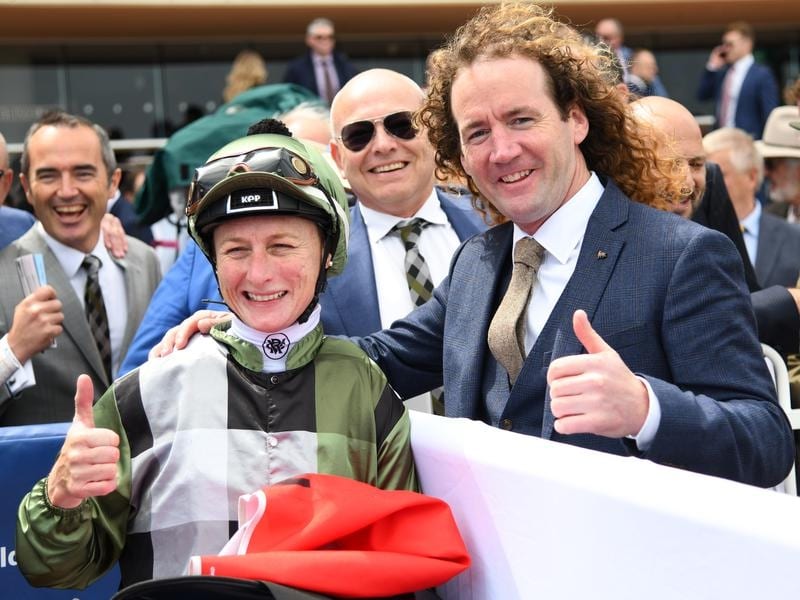 Jockey Linda Meech hopes Thought Of That gets beaten after her sacking from the Victoria Derby second favourite.

Meech had ridden Thought Of That to victories at Donald and Caulfield but was replaced by Mark Zahra on Tuesday morning after she had partnered the three-year-old in a gallop at Caulfield.

Thought Of That is a firming $3.70 second elect behind Shadow Hero ($3.40) in Saturday’s Derby at Flemington.

Part-owner Brae Sokolski called the shots in choosing a jockey, after which Melbourne Cup-winning jockey Michelle Payne described the part-owner a “pig” in a tweet she later deleted.

Payne was on Wednesday fined $1000 by Racing Victoria stewards which said the tweet was offensive to Sokolski.

Meech said she thought she had handled her sacking well.

“Things like that do bother you, but I’ve had 20 years in the racing game and Brae hasn’t been there quite as long,” Meech told broadcaster racing.com.

“But it’s a little bit disappointing.

“I think if you’re any good at maths you’ll work out that he’s had a lot more opportunities but his strike-rate is about the same as mine.

“Brae’s a smart enough bloke to stick with the big guns, but I hope it gets beat.”

Meech said she had received considerable support from family and friends while keeping away from social media.

She said her manager Sally Gordon had given her some sage advice when she talked about James McDonald being replaced aboard The Autumn Sun.

“I suppose it happens to everyone,” she said.