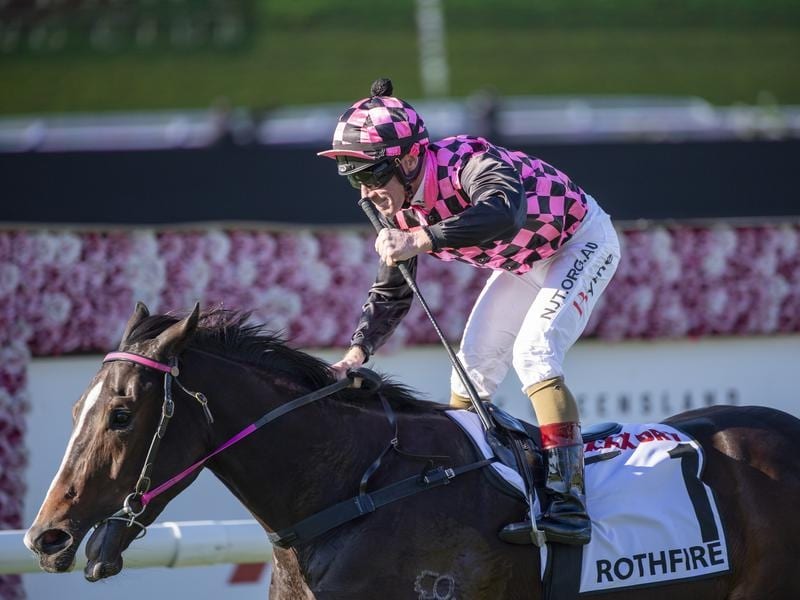 Australian sprinter Rothfire looks to have made a full recovery from an injury that has kept him off the racetrack for nearly 12 months, as he set the turf alight in his first trial back on Tuesday morning at Doomben in Brisbane, Queensland.

The Robert Heathcote-trained four-year-old has had two pieces of work on the course proper over the past two months in the early hours of the morning, but this week marked his return to the public view for the first time since breaking down in the Golden Rose last year.

The son of Rothesay sat outside the leader, Le Palmier, in the 1000m Open Trial and quickly put paid to the Tony Gollan-trained sprinter, kicking away to win by 3.5 lengths in a time of 55.95s.

Rothfire was a $6 favourite for The Everest at the time of his injury, and that race looks well and truly on the cards again following Tuesday’s trial.

Sydney Metropolitan Premiership-winning jockey James McDonald has been booked to ride Rothfire in The Shorts over 1100m at Randwick, should McDonald’s regular mount Nature Strip not line up in the event.

The Shorts has been the stepping stone for most sprinters into The Everest in the past few years, so we would expect to see the TJ Smith Stakes winner line up in that race, but Heathcote is hopeful he can get the top hoop on Rothfire’s back instead.

“He (Rothfire) made a statement this morning; he showed the racing world or the racing public here in Australia he’s back. He’s a genuine Group 1 horse,” Heathcote told Racenet.

“James (McDonald) is the number one rider in Australia … and I’m more than happy to have James sit on him and hopefully win The Shorts, Group 2, Sydney on the 18th of September and get us into The Everest.”

Rothfire is now a $13 chance in Sportsbet’s market for The Everest.