Romantic Warrior gets his chance to soar 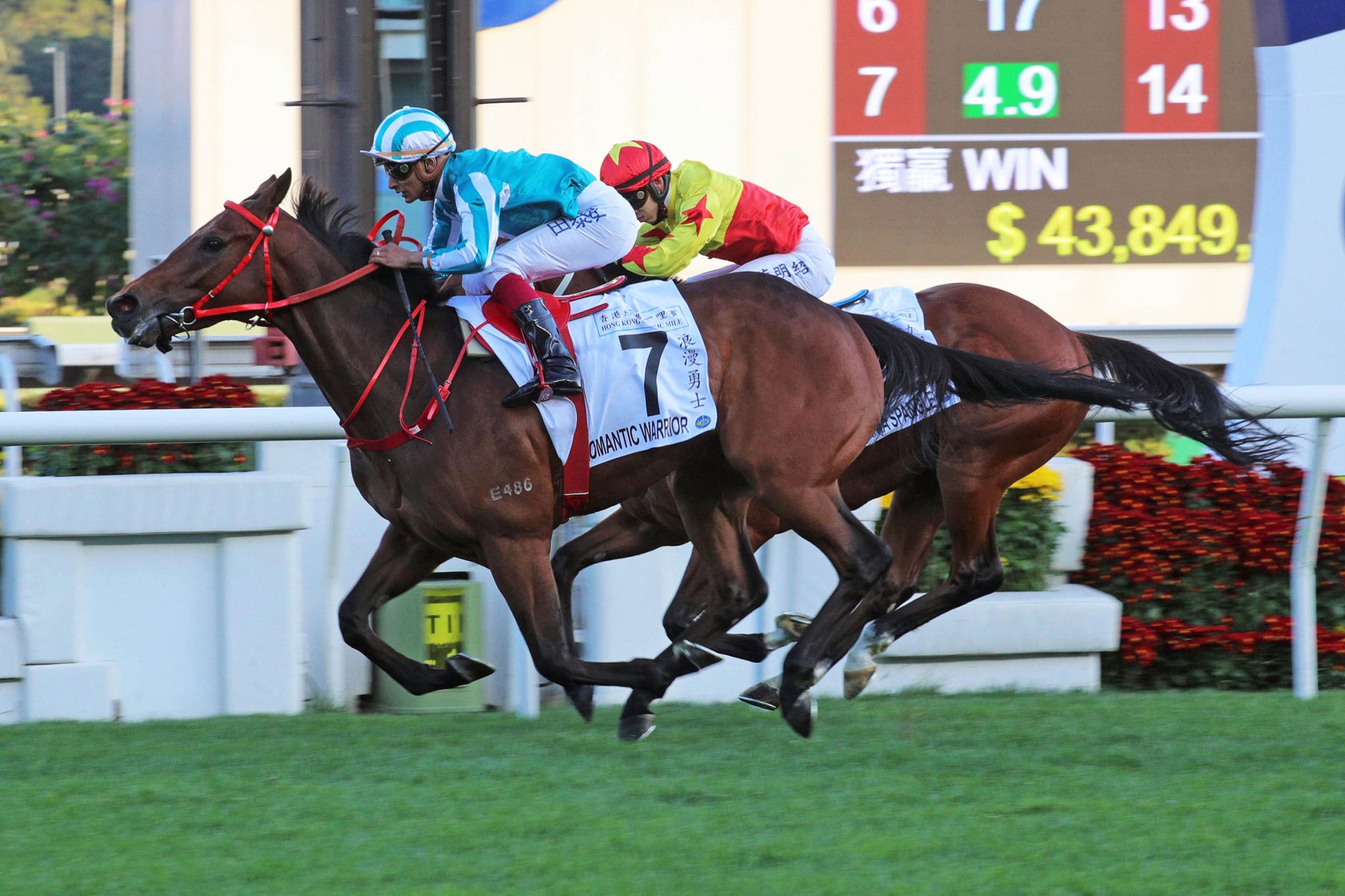 No international runners mean the HKD$65 million bounty on FWD Champions Day is on offer only to locally trained horses across three top-class events and, without a dominant force or “chief” of the city’s middle-distance ranks, Teetan feels Romantic Warrior can make the most of favourable conditions.

“If it was a different situation with international horses here, I would have felt that, while he has the ability, at this moment to take them on at level weights that it could be a bit hard for him but now, as we don’t have any internationals, this could give him the opportunity to show his ability,” Teetan said. “You always respect your opposition, but I think the situation has worked out perfect for him.”

Appearing on Tuesday, (April 12) for his first barrier trial since etching his name down in Hong Kong racing folklore last month, Romantic Warrior floated under Teetan in an easy 1m 10.23s behind Beauty Joy over 1200m on dirt.

“It was good, it was just a trial to get him going again. He’s pulled up well after the Derby – he’s in good shape and we were happy with his work this morning.

“He’s got a good temperament, he’s the kind of horse who, whatever you want him to do, he just does it, he’s very kind and it’s lovely to ride him – you don’t get many of these,” Teetan outlined.

“When you get a horse like him to ride it just makes things easier, it builds your confidence riding such a nice horse, you just have to relax and let them do their job, they know what to do and they’ll give you 100 percent, you just need to show them the way,” Teetan said.

Bought for HKD$4.8 million by owner Peter Lau out of the 2021 Hong Kong International Sale, Romantic Warrior has swiftly enhanced his earnings to HKD$24.815 million with six wins from seven starts overall under the care of trainer Danny Shum.

“I doubt that he will need much more now, he seems like he’s holding his form nicely, he just needed that trial to switch him on a bit more – Danny is very happy with the horse,” Teetan said.

Since arriving in Hong Kong for the 2013/14 season, Teetan has shot the lights out with 529 wins in the city, a figure he is persistently looking to improve after initially beginning his career in his home country of Mauritius before opportunity arose at the well-renowned South African Jockey Academy.

“It’s been a long journey since I started, I’ve travelled a lot but if you work hard and you put your mind to what you want to achieve and just stay out of trouble, nothing is impossible.

“Of course, when I got here, the only thing I wanted to do was achieve success in Hong Kong and that’s not easy but I believed if I did the work and put in everything I could, then things could happen, it’s taken a few years but winning the Derby is wonderful – it’s one of the races everybody in Hong Kong wants to win,” Teetan said.

Teetan, 31, has slammed in 55 wins this term but is suspended for Wednesday’s (April 13) nine-race fixture at Happy Valley.

“In Hong Kong, to all of the jockeys, you just want to keep riding winners and especially when the big ones come, it’s not all about the money, there’s something about the big races in Hong Kong, they’re special and you want to win them – so many people are watching, other owners notice you and it’s all about working hard,” Teetan said.

Teetan’s wife Xaviere is due to give birth this week to the pair’s first child.

“It’s been a bit hard, not being home for three years now but you want to see your family; my grandma is getting old, so it would be nice to see them. I think this season (break) we’ll have the opportunity to go and see them and my little baby is coming, hopefully this week, she is due, hopefully now because I am suspended,” the Mauritian said.

“I’m riding More Than This in the Champions Mile and Master Eight in the Chairman’s Sprint Prize,” he confirmed.

“It’s not a bad pick up – he (Master Eight) ran good last time and that’s what Frankie (Lor) said, he said ‘let’s hope for another Mr Stunning’ because that was fantastic, it would be nice and I’ve had good success with Frankie – two Group 1 wins with him,” Teetan said.

Master Eight is one of Hong Kong’s most exciting short-course talents with five wins from eight starts, including victory in the 2022 Group 3 Bauhinia Sprint Trophy Handicap (1000m).