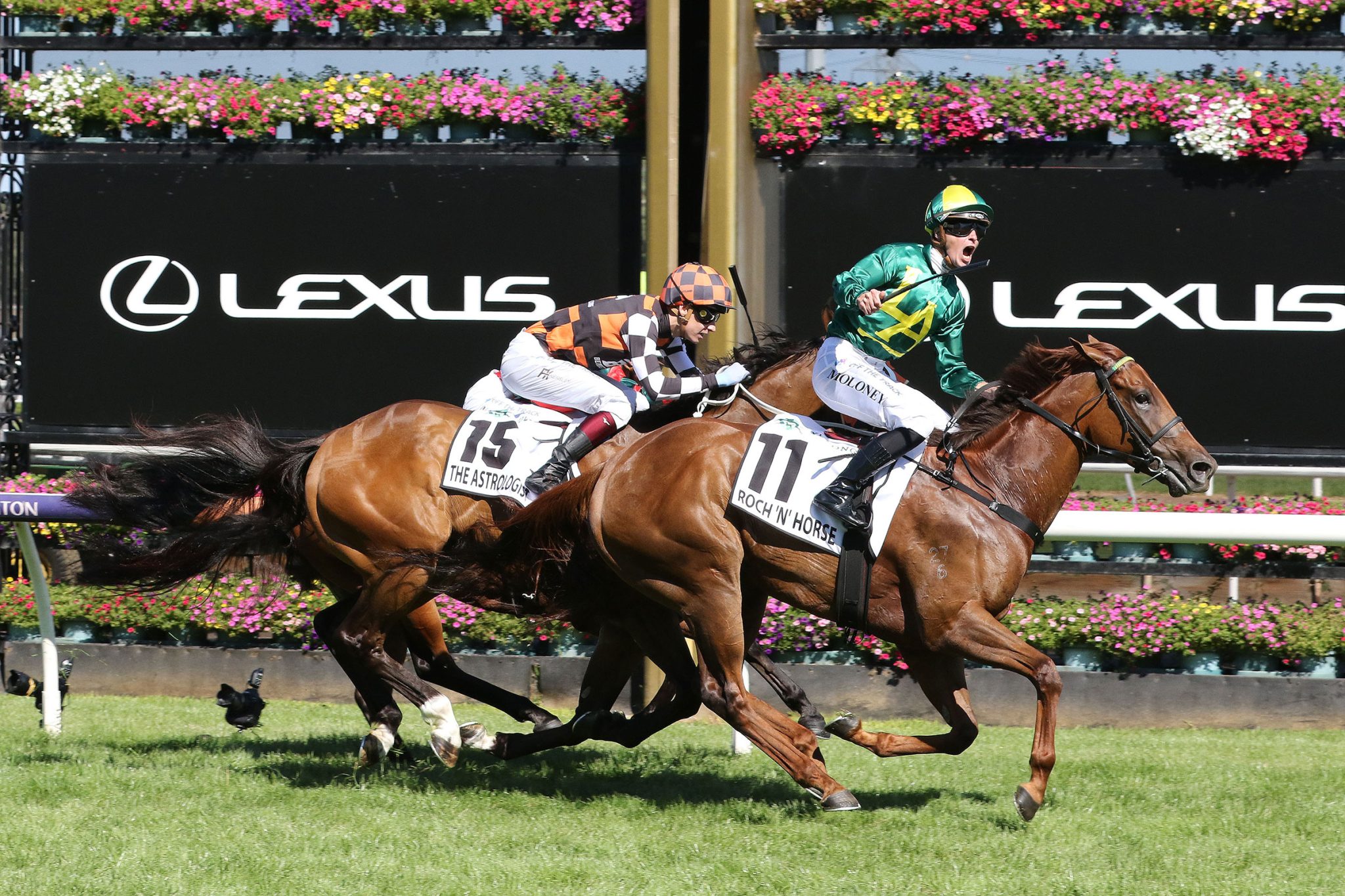 Kiwi raider Roch ’N’ Horse made a mockery of those who dismissed the form of New Zealand sprinters, getting under punters guards in her stunning +10000 victory in the Group 1 Newmarket Handicap (1200m) at Flemington on Saturday.

Sporting the colours of Little Avondale Stud, the lightly-raced daughter of Per Incanto had raced without luck in a pair of recent New Zealand Group One assignments and the trans-Tasman stable of Michael Moroney and Matamata training partner Pam Gerard were keen to give the five-year-old mare her chance in the time-honoured sprint.

With the field splitting into two divisions, the far-side provided the first-three home with Roch ’N’ Horse defeating The Astrologist and September Run and providing jockey Patrick Moloney with his first elite-level win.

The New Zealand form held strong with Levante, who narrowly denied Roch ’N’ Horse victory in the Group 1 Telegraph (1200m), clearly the first horse home on the grandstand side where the majority of the field raced.

Moroney said it was nice to land the Newmarket after Group One colt Tivaci, who these days resides at Waikato Stud, was luckless in the prestigious sprint.

“We were pretty luckless not to win one with Tivaci in his year, he probably should have won. At times it takes a while to get it back and we finally got it back, so that’s great,” Moroney said.

“It’s a great effort by Pam (Gerard) in New Zealand, she sent the horse over here. We gave her a little jump out there and decided to skip the Oakleigh Plate (Group 1, 1100m), we were here in time to run in it.

“She settled in well, trialled well and had been pretty luckless not to win a Group One before now really.

“I thought the New Zealand sprinters were up to it. A lot of people didn’t think they were, but I was pretty sure with what I’ve seen there that they were.

“We were always going to get to Australia, it was just a matter of which carnival. We thought this was the right place for her.”

The winner of four of her 13 starts, the patiently handled mare has now won AUD$1,037,783 in prizemoney, with the syndicated filly providing a bumper pay-day.

“She injured herself as a young horse and she didn’t get to the races until she was an older horse. She hasn’t been straight forward but Pam has done a great job with her,” Moroney said.

An emotional Patrick Moloney was delighted to land his maiden Group One with his fiancé Jess on-hand to celebrate.

“It’s just massive. I can’t thank everyone enough and the horse today, she was just in the zone,” Moloney said.

“She waltzed out of the yard (and) had a strut to her. She was down at the barriers quiet as a lamb and for a horse that I trialled during the week, she was pretty hot. But today, she was so calm and conserved her energy.

“Things couldn’t have worked out any better. I said to Mike early that I thought we’d go down to the fence and follow the fence. It is as good as anywhere and we got a beautiful cart on the back of September Run and I peeled her to the outside early enough and she just went bang for me.

“The owner, Catriona, you see she’s in a wheelchair. She bred this horse and said that ‘I wouldn’t have travelled for 48 hours and struggled to get here if I didn’t think it was a chance. That just filled me with confidence.”

While Catriona Williams of Little Avondale Stud was on-hand at Flemington to welcome back her star, husband Sam watched the race from a pub in Turangi as the Masterton breeder ventured home from the six-day Karaka Sales, which concluded on Saturday.

“Last week with Belluci Babe winning a Group Three in Sydney was unbelievable, but winning a Group One in Australia over 1200m – you’ve got to be kidding me,” Sam Williams said.

“We were half-way home from Karaka and stopped at the pub in Turangi to watch the race. The whole pub knew we were there. At the 300m mark when she made her move, we were screaming.

“We shouted the bar and we were getting out of there before they wouldn’t let us out of the town.

“One bloke asked us if we’d like to buy a house there, so we thought we should be on our way.”

Williams said it was important that he stayed and saw through the Karaka Sales given the yearling product was two and a half years in the making.

“Cat said ‘Sam, we’ve got a runner in a Group One at Flemington, one of us has got to go’,” he said.

“She had a hell of a trip to get there, she got stopped at customs in Wellington and they weren’t going to let her on the plane due to some documentation.

“She was the last one on the plane. But she is unbelievable. She is in a wheelchair and had three bags with her, but it doesn’t matter, she gets people to take it for her.”

The victory was another feather in the cap of the stud’s proven Street Cry stallion Per Incanto, sire of 23 individual stakes winners, including five at Group One level.

Per Incanto was represented by Lost And Running in the race as well, while he was also champion sire by winners in Hong Kong last season.

“He has had a wonderful sales series and has never been sex biased – colts and fillies – he does it all,” Williams said.

“Per Incanto can really leave a type and the stallion himself was a very fast horse. He is going to get a big feed when I get home.”