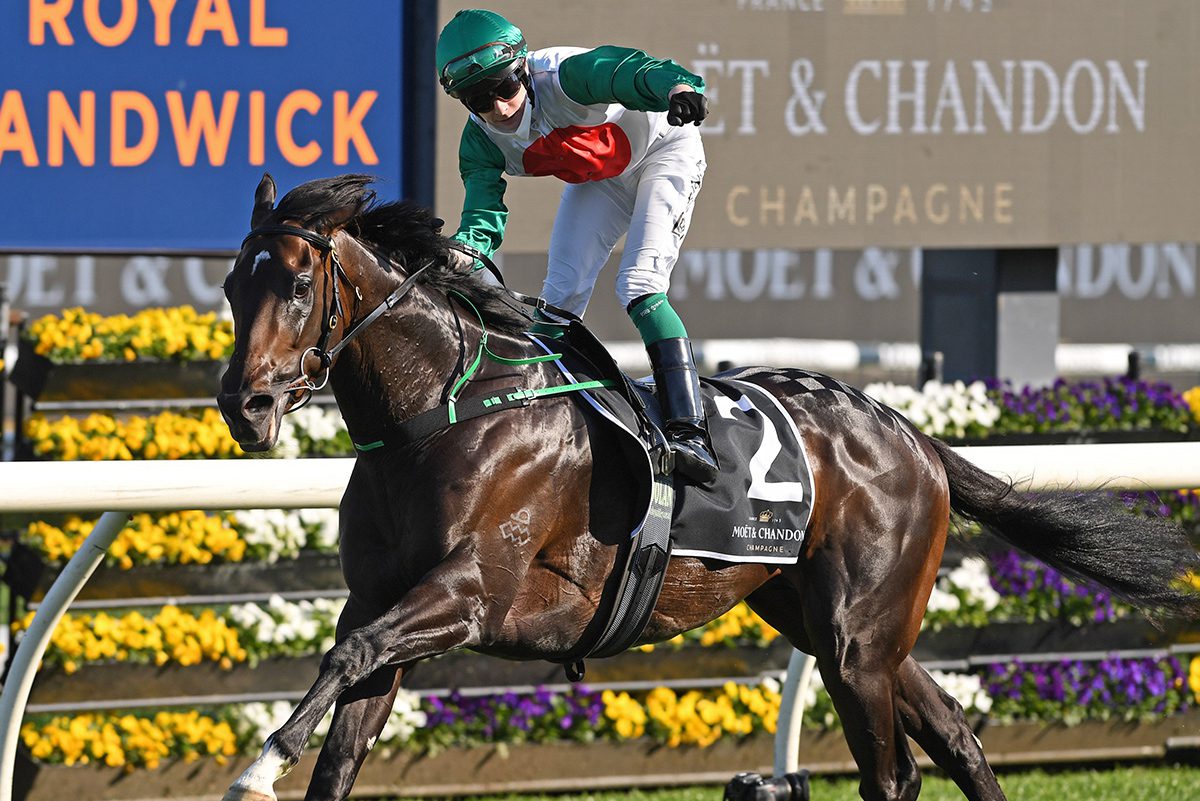 At just his third career start, the three-year-old son of Deep Impact started a heavily supported $2.80 favourite with Sportsbet in the $1 million race and raced away to win by 2.2 lengths over the Flight Stakes winner Never Been Kissed.

Having partnered the colt in all four of his trials and his first two race starts, Profondo’s owners showed their faith in Robbie Dolan and kept him on board in the Group 1 event, which saw the jockey ride the race of his life.

Jumping from barrier 10, Dolan was quick to make a decision and took his mount forward to sit outside the eventual runner-up, before laying down the gauntlet in the straight to race away with the prize in just his third career start.

“I don’t know what to say – I can’t believe it,” an emotional Dolan said on Sky Racing.

“First of all, thanks to the owners for leaving me on the horse today because they could have put anyone on him.

“I came here (Australia) five years ago with a schoolbag on my back, just trying to ride a few winners, I don’t know what to say.”

“It’s all go for Profondo in the Spring Champion.”

Profondo stamped himself as a horse to watch in his trials leading up to his debut, before winning in awkward style on debut on September 1st over 1400m in a Randwick-Kensington 3YO Maiden.

The Magic Millions sales topper then went to the Group 3 Gloaming Stakes on September 25 where he cost himself the race by wanting to duck in over the final stages, but the stable was confident they had got that out of his system before his grand final in the Group 1.

“He should’ve won the last race, I’ll take all the badness with that; I pulled my stick (whip) through and I panicked a little with that and for the owners to keep me on today, it’s a token of how nice people they are.

“They deserved that today.”

Dolan’s affiliation with the horse is what he believes kept him on in the Group 1, given “he is a tricky horse to ride”.

“That probably played into my hands why I kept the ride on him today,” the jockey said.

“Richie’s (Richard Litt) done an amazing job with the horse.

“To get him to win a Group 1 in his first couple of starts is insane.

“I was absolutely cruising at the 400m going past the Group 1 winner (Never Been Kissed) and nothing was catching me.”

Although the winning hoop feared he may lose the ride after his last start defeat, trainer Richard Litt had no doubt that the Irishman would be on board in Saturday’s win.

“I’m extremely proud of him, he has done a wonderful job,” the trainer said.

“He did a wonderful job then, he rolled outside the leader and I was about to have a heart attack, but he knew what he was doing.

“He knew what the horse could do and he had great faith.

Litt confirmed that his Group 1 winner will now head to the paddock for a well-earned spell and be targeted towards the Sydney Autumn, passing up the opportunity to run in the Cox Plate as a three-year-old and the Victoria Derby.

“He will go to the paddock now,” Litt said.

“The world is his oyster.”