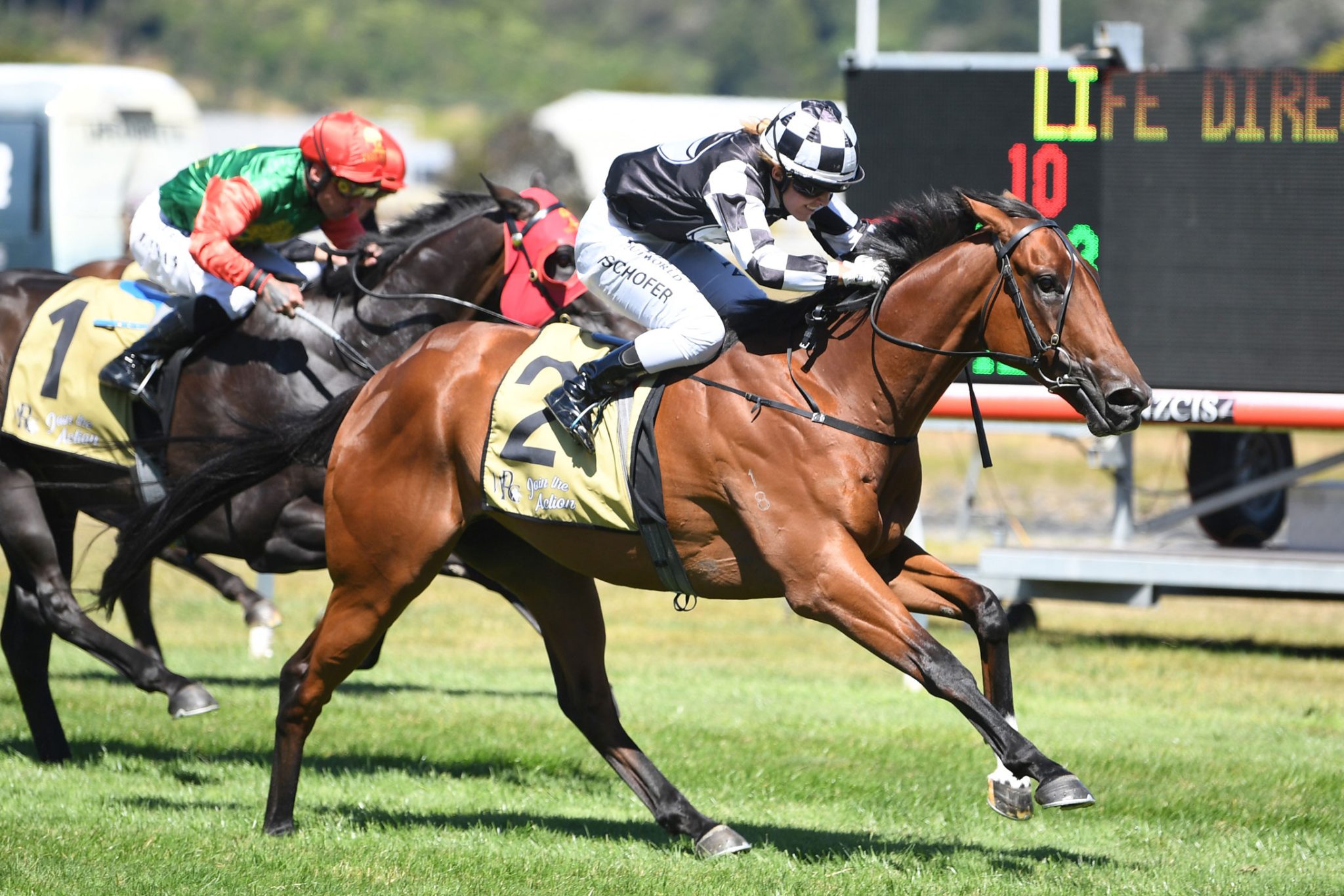 Saturday’s Group 2 Life Direct Wellington Guineas (1400m) at Trentham was a sink-or-swim moment for unbeaten three-year-old Shamus, and he rose to the challenge in superb style.

Trained by Allan Sharrock in New Plymouth for his long-time clients Noel and Ron Stanley, the son of Shamexpress had made a big impression with dominant victories in each of his first three appearances.

But Saturday’s Guineas was on a different level to anything he had come up against before, sampling the black-type waters for the first time and facing the likes of Group Two winner Pareanui Bay and Group One placegetter Shepherd’s Delight. It was the first real test of where Shamus stood among this season’s elite three-year-olds, and his performance left no doubt.

“He’s a serious racehorse,” Sharrock said. “This was the race where he had to put his hand up, and he’s done that. He’s put his hand up and said, ‘I’m the man.’ He knows he’s a good horse, he’s got a bit of a swagger.

“The Stanleys have already turned down a lot of money for this horse, and I think he’s worth even more money now.”

Patiently ridden by Hazel Schofer, Shamus settled towards the back of the Guineas field, biding his time along the rail as Sassy Merlot set a strong tempo.

Hot favourite Pareanui Bay travelled well behind the leader coming up to the turn and looked the winner at the top of the straight, but that all changed when Schofer presented Shamus to the outside and let him rip.

The gelding came with giant strides out wide and swept past Pareanui Bay to win by a length, with Sassy Merlot holding on gamely for third.

“I didn’t really want to be on the rail, but he was always going to get back and that was just where I ended up,” Schofer said. “I had a heap of horse under me, and I had enough room to get him out and let him down in the straight.

“I’ve liked him since his very first jumpout, he’s a really nice horse.”

Shamus is the latest in a long line of big-race performers for the trainer-owner combination of Sharrock and the Stanleys.

“Allan’s been training for us for over 30 years now and we’ve had some good horses together, and this is another very exciting horse,” Ron Stanley said.

“Hazel said after he won at Awapuni that she couldn’t wait to get him to Trentham to show off his gears, and that’s exactly what he did.”

The TAB moved quickly after the Guineas, slashing Shamus to outright +350 favouritism for the Group 1 Vodafone New Zealand Derby (2400m) at Ellerslie on March 5. Sharrock and the Stanleys previously teamed up to win the Derby with Wahid in 2006.

Shamus was bred by Jomara Bloodstock and was offered by Woburn Farm at the 2020 New Zealand Bloodstock Ready to Run Sale at Karaka, where Sharrock bought him for NZD$85,000.

One race later the application of blinkers to last season’s Group 3 Wellington Cup (3200m) winner Waisake did exactly what Sharrock had hoped they would as the laid-back customer found a new lease of life to take out the Group 3 Mode Technology Trentham Stakes (2100m).

Sharrock has been slowly putting the miles into the legs of the seven-year-old son of Zed as he worked him to peak fitness in a bid to defend his Wellington Cup crown in a fortnight.

Four starts in his current campaign had seen Waisake running on late over a variety of distances, but not troubling the placings on any of those occasions.

Sharrock rolled the dice on Saturday and despite settling last for rider Craig Grylls, Waisake looked a different horse as he grabbed the bit turning for home and producing a powerful late charge to defeat House Of Cartier and Mohaka in a thrilling finish to the contest.

“He’s been going alright all season, but we probably have been trying to beat the handicapper (for the Wellington Cup weight) and we’ve ended up with 59kgs anyway,” Sharrock said.

“That was pretty special as that was a tidy Trentham Stakes field.

“I said to Gryllsy, that if he could run top five I would be happy so I’m ecstatic now.

“The aim all year has been the Wellington Cup, but where we go after that is still to be seen.

Grylls admitted he had some concerns early in the race as he had to keep Waisake’s mind on the job, but once he found top gear in the home straight he simply flew at the finish.

“He was quite lazy throughout the race and at the start I really had to drive him along,” he said.

“I ended up in not a bad spot, but then I got shuffled back to last and he was off the bit.

“You’ve just got to keep at him and he keeps going. The best part of the race was definitely the last bit.”

Bookmakers have installed Waisake as the clear +180 favourite for the Wellington Cup that will be run at Trentham on January 29.

A son of outstanding staying influence Zed, Waisake was one of the last horses bred by the late Lorraine Jameson from a family she had nurtured for 50 years.

Sharrock purchased Waisake for NZD$28,000 from the draft of Ainsley Downs at the 2016 New Zealand Bloodstock Festival Yearling Sale.