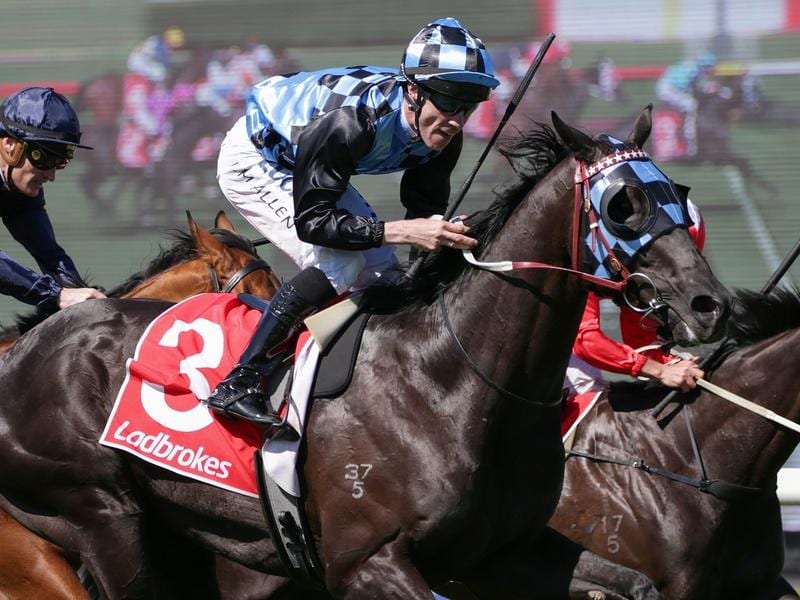 John Allen has added to a memorable spring in the saddle with another feature race win, this time aboard exciting colt Ringerdingding in the Sandown Guineas.

Allen won the Victoria Derby on Extra Brut and the Mackinnon Stakes on Trap For Fools at Group One level on consecutive weekends during the Melbourne Cup carnival at Flemington and the jockey continued his momentum on Saturday with victory in one of the day’s features.

Ringerdingding, who Allen guided to an impressive Listed race win at Flemington last weekend, backed up in the Group Two Sandown Guineas (1600m) and the Darren Weir-trained colt again launched late on the outside to get home over the top of Seabrook and Long Leaf.

“I’ve had a great couple of weeks. I’m getting great opportunities so I just have to make the most of them.”

With the Sandown Guineas already secured with Ringerdingding, Victoria’s premier trainer has the Group One Australian Guineas (1600m) at Flemington in March in his sights for the highly talented colt, who only joined his stable earlier this preparation.

“I think now he’s got to be targeted towards the Australian Guineas,” Weir said.

“Palentino won the Australian Guineas (in 2016) and he’s definitely the sort of horse who should be heading towards that race.

“It’s a bit heart-in-your-mouth stuff with him because he gets back and let’s rip late.

“I thought today he was in a better position. He wasn’t as far back as he was at Flemington and he got onto the back of a couple of horses to cart him into the race.

“It took all of the straight but he really let rip that last bit.

“And going forward he’s a beauty.”

Ringerdingding, the $2.90 favourite, defeated Group One-winning filly Seabrook ($3.40) by three-quarters of a length, with another half-neck to Long Leaf ($8).

Weir said Irishman Allen, who came to Australia as a jumps jockey several years ago but is now also mixing it with the best in flat races, had worked hard behind the scenes for his stable for a long time.

“He’s made himself a good rider,” Weir said.

“He always had the ability but just had to get the opportunity.

“More than often he gets the job done in these good races.

“He deserves everything he gets.”