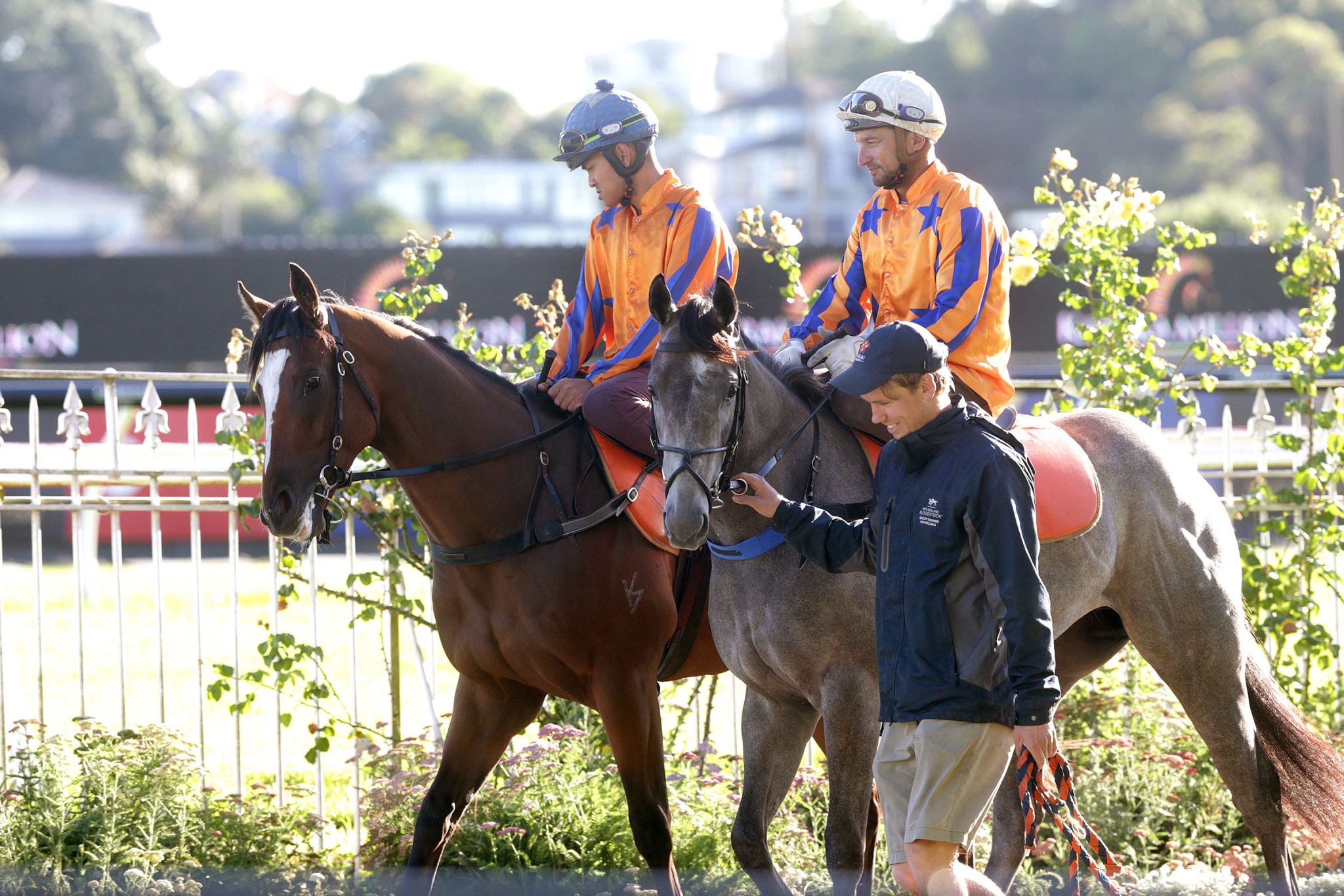 It’s a bittersweet week for trainer Jamie Richards as he gets ready for his final tilt at the Karaka Million at the helm of Te Akau Racing’s Matamata stable.

In May, Richards will depart New Zealand shores for his new home of Hong Kong where he has accepted an invitation from the Hong Kong Jockey Club to join their training ranks.

However, before then the talented young horseman is keen to add a sixth straight victory in the Doubletree By Hilton Karaka Million 2YO (1200m) for Te Akau.

“It will be good to go out on top, we have got some nice horses in and hopefully they can present well up there (Ellerslie) on Saturday,” Richards said.

The Matamata operation will once again have a strong contingent in this year’s Karaka Million 2YO, with five possible contenders for the rich two-year-old feature.

Three of those juveniles had a look around Ellerslie on Monday, including Grace ‘n’ Grey, Lord Cosmos, and Dynastic.

“Joe Kamaruddin rode Mohawk Brave in a piece of work with Dynastic, who Opie (Bosson) was on,” Richards said.

“Mohawk Brave is in the Almanzor (Group 3, 1200m) and is going well. He is a nice horse and is two from two. Dynastic, with a month since racing on Boxing Day, I just wanted to get him away from the place and give him a nice hit-out. They both went well together.

“Our other pair was Lord Cosmos, who was ridden by Joe, and Opie was on Grace ‘n’ Grey. They did some nice work together as well.”

Te Akau’s two other potential Karaka Million 2YO contenders Fellini and Time Flies will do their final piece of work at home on Tuesday morning.

“Fellini is going well. He has won a couple now and is right up there in the market,” Richards said.

“He will have a bit of work tomorrow with Time Flies and then he will head up there on Saturday in good shape.”

Time Flies is currently 15th in order of entry for the 14-strong field and Richards is hopeful of a defector so the son of Time Test gains a start.

“He is a rough chance of getting in there, so he is certainly going to be doing some work in the morning like he is going there,” Richards said.

“We have been lucky in previous years to have had some nice horses and we have got some nice horses again this week. We haven’t got the favourite, with Wolverine being the dominant two-year-old so far, so we are going to have to be right at the top of our game and hopefully we can get the horses peaking for Saturday.”

Te Akau will also have three contenders in the Karaka Million 3YO Classic (1600m) including -125 race favourite On The Bubbles, Sophisticardo (+1100), and Pin Me Up.

On The Bubbles finished runner-up over 1200m when first-up at Te Rapa last month before winning the Listed Uncle Remus Stakes (1400m) at Ellerslie on Boxing Day.

He had a subsequent 1050m trial at Matamata last week, in which he was unplaced and failed to impress on-lookers including his trainer.

“It (trial) was a bit disappointing, but I think he has gone the right way since then,” Richards said.

“We are happy with him, we just need everything to go to plan with him now. He will do a bit of work in the morning and Opie will ride him.

“Sophisticardo will head to that race as well. He had an exhibition gallop between races at Matamata. He looks a bit suspect at a mile but if he gets a soft draw and a nice run in the race I think he is going to be a chance. He will be one to follow for a bit of value.

“Pin Me Up will be our third runner in there. She ran well at Ellerslie last Sunday and seems to have done well since. I think she is a real smokey in the race.”

Te Akau will also have a three-pronged attack in the Group 3 Cambridge Stud Almanzor Trophy (1200m), with Imperatriz and Sword Of State joining Mohawk Brave.

The daughter of Savabeel had a memorable tussle with Aegon in the Karaka Million 3YO last year, just going down to the Murray Baker and Andrew Forsman-trained gelding, and Richards is hoping to see the best of the mare this weekend.

“Opie is going to ride her and she seems to be going well,” Richards said.

“She is going to be fresh-up in a pretty big race, but she has trialled up well.”

Meanwhile, Richards said Entriviere has come through her fifth placing in the Group 1 Telegraph (1200m) well despite being assessed a 2/5 lame in her right-hind leg following the race.

“I didn’t think she was too bad. I was down there with the vet and I think everybody was being pretty cautious,” Richards said.

“We are happy with her here at home. She does look a bit tired after a few days away so she will have a month between runs now and head towards Te Rapa (Group 1 BCD Group Sprint, 1400m). She might have a trial in-between times just for fitness purposes. She is going to have a pretty easy couple of days around the stable and go from there.

“I think she ran really well. From the position she was in the run it was impossible to win. It is just not possible to run those sort of sectionals when Levante is four lengths in front of you.

“I am really proud of her, it just wasn’t our day, and I look forward to meeting Levante again at Te Rapa.”

“I think she got galloped on or took a bit of a rough stride and Brett (Prebble, jockey) may have overreacted. She seemed to come through the race well,” he said.

“Ashley Handley (travelling foreman) and our vet are pleased with how she has come through it all.

“Unfortunately, it is just one of those things that happens from time-to-time, jockeys have just got a split-second decision to make.

“We are disappointed with the way it all finished up because we had been happy with her. We will give her a break now and get her home and look forward to the next preparation with her.”