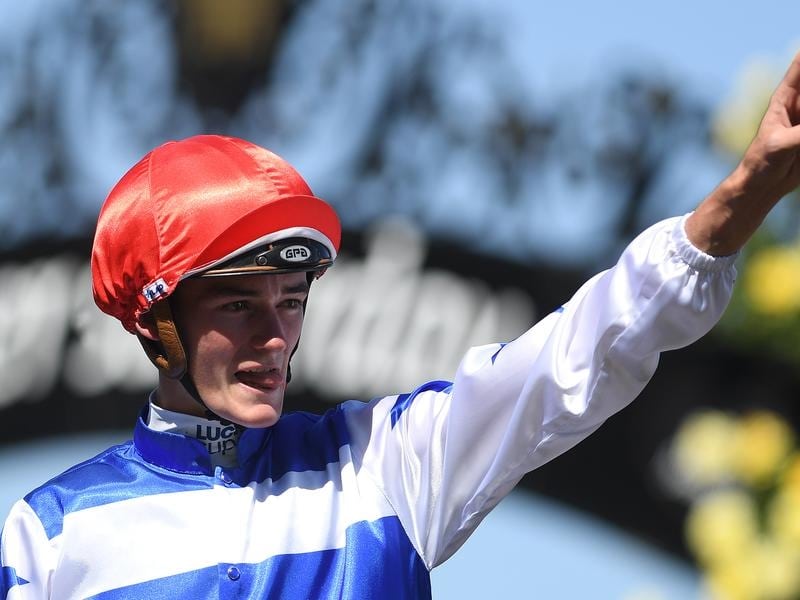 Regan Bayliss has been booked to ride Redkirk Warrior in the July Cup at Newmarket with the Lindsay Park team hoping to erase the memory of his unplaced effort behind Merchant Navy in the Diamond Jubilee Stakes at Royal Ascot.

Tom Dabernig says he and fellow Lindsay Park trainers David and Ben Hayes have no criticism of Frankie Dettori’s ride but feel having a jockey who knows the horse will be beneficial.

Bayliss has won back-to-back Newmarket Handicaps and the Lightning Stakes on Redkirk Warrior.

“What we can put it down to is overseas travel,” Dabernig told RSN927.

“Arriving there, all the signs were he travelled well, he was eating, hydrated, we were happy with his work.

“We did his final piece of work a week out from the race, then we tapered in but you could see from the 500 metre mark, we were clearly in trouble. Clearly the travel had an effect.

“After the race, we did all the normal testing of bloods, scoping, and it all came back normal and clear.

“We decided clearly there’s a bit of water to go under the bridge. He’ll continue on at Newmarket with the view of possibly running in the July Cup on the 14th at Newmarket, which is 1200 metres down the straight.

“And we can confirm that Regan Bayliss has been booked for the ride.

“There was no knock on Frankie Dettori.

“He was probably a victim of the horse not performing on the day.

“Regan’s got an outstanding record on him, winning three Group Ones.

“Hopefully if the horse has had a bit longer to acclimatise and settle back in with a jockey that’s familiar with him, hopefully we can get him back to what we know he’s capable of.

“Clearly on his best performances down here, we should look through the form of Merchant Navy, he would’ve been right around them.”

Australian Group One winner Merchant Navy, now in the care of Aidan O’Brien, could also run in the July Cup before returning to Australia to take up stud duties at Coolmore.