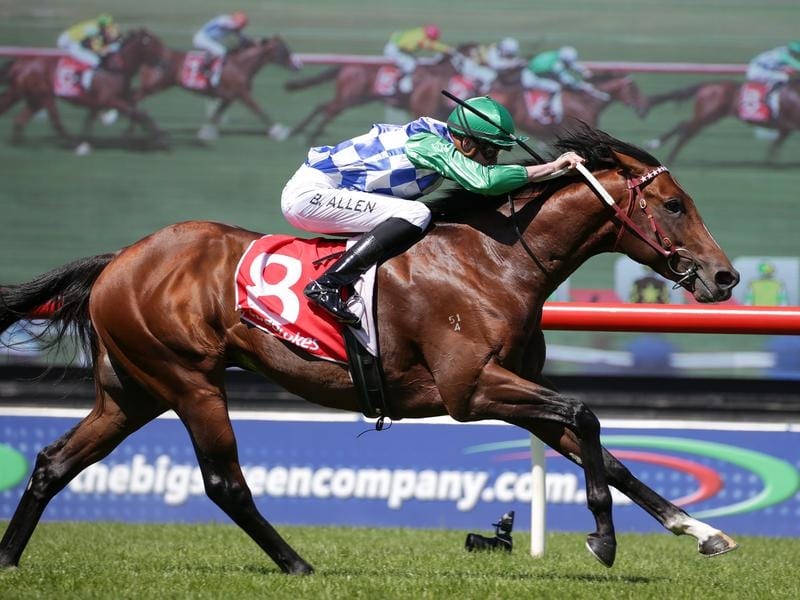 Fifty Stars has put his hand up for a potential Group One assignment in Perth with his first victory at stakes level at Sandown.

Trainer Darren Weir says the beautifully bred four-year-old needed to win Saturday’s Sandown Stakes to work his way up the ballot order into next week’s Railway Stakes at Ascot.

Fifty Stars had his price slashed from $9 into $5 second favourite behind Galaxy Star ($4.50) for next Saturday’s 1600m contest.

A decision on whether Fifty Stars joins four other Weir runners on the flight to Perth on Sunday will be left as late as possible.

“We’ll see how he does tonight, see how he is in the morning and make the decision then,” Weir said.

Ridden by apprentice Ben Allen, Fifty Stars was sent off the $1.70 favourite in defeating Holy Snow ($7.50) by 1-1/4 lengths, with Fastnet Tempest ($12) another half-length away.

Weir said he would have a good think about the distance and its possible effects.

“Whether it’s the right thing to do or not, I’m not sure,” Weir said.

“He’s had to come here, he’ll have to go back to Ballarat, float down and get on a plane, fly to Perth and then you’ve got five days to settle in and then race again.”

If Fifty Stars doesn’t join stablemates Iconoclasm, Peaceful State, Voodoo Lad and Junipal for the trip west, Weir said his turn at Group One level would come one day.

“He’s an exciting horse for the future and has got the pedigree to match,” Weir said.