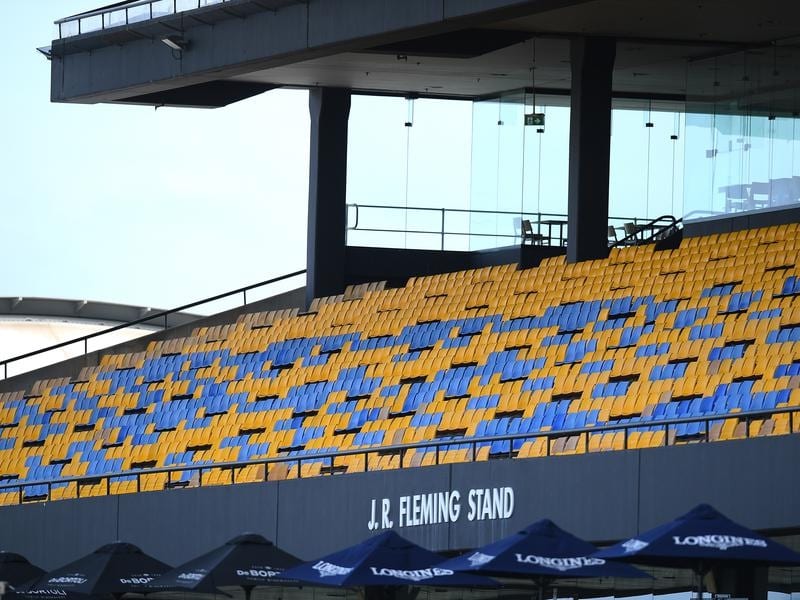 Australian racing is in limbo pending the results of COVID-19 tests on a licensed participant, believed to be a jockey.

Until Wednesday, racing had been the last major sport still standing with meetings conducted under strict biosecurity protocols and without spectators.

That changed with Sandown called off after two races when Racing Victoria became aware health authorities had alerted the licensed person they had travelled on a commercial flight on March 12 on which a passenger subsequently tested positive to coronavirus.

RV immediately cancelled the rest of the Sandown meeting as well as two meetings on Thursday.

Racing NSW followed suit with the Warwick Farm meeting abandoned after five races and Hawkesbury on Thursday called off.

Wednesday’s meetings at Ascot in Perth and Launceston were also abandoned.

The unnamed participant attended Saturday’s Golden Slipper meeting at Rosehill and travelled to Sydney by charter flight to adhere to RV’s travel protocols.

They are not showing any symptoms and if the results come back negative on Thursday, authorities hope to get racing up and running again the following day.

“In the event the interstate participant tests negative, Racing NSW will immediately resume racing subject to any government restriction.”

RV chief executive, Giles Thompson, said the licensed person did the right thing by contacting them as soon as they were told of their situation.

“We spent a lot of time putting protocols in place and educating the participants,” Thompson told broadcaster racing.com.

“The participant has done exactly the right thing and we’ve been notified and everything we put in place has swung into action.

“The whole point of these protocols is to keep racing going and prevent potential exposures.

“But when you do have a potential exposure (it is important) to contact and trace as quickly as possible and identify whether there are others that have been exposed and deal with that us well.

“Unfortunately this exposure came before those protocols were put in place, 13 days ago.”

Harness racing in NSW has also been shut down after an employee of the Penrith club tested positive after coming into contact with another person outside the industry.

The Sydney autumn carnival is scheduled to continue at Rosehill on Saturday with the meeting to feature two Group One races, the Vinery and the Tancred Stakes.

The Australian Turf Club was planning even stricter protocols than were in practice at the Slipper meeting.

Racing in New Zealand has been put on hold for a month while most European racing is also suspended.

In Asia, racing continues in Hong Kong, Japan and Singapore but not South Korea.