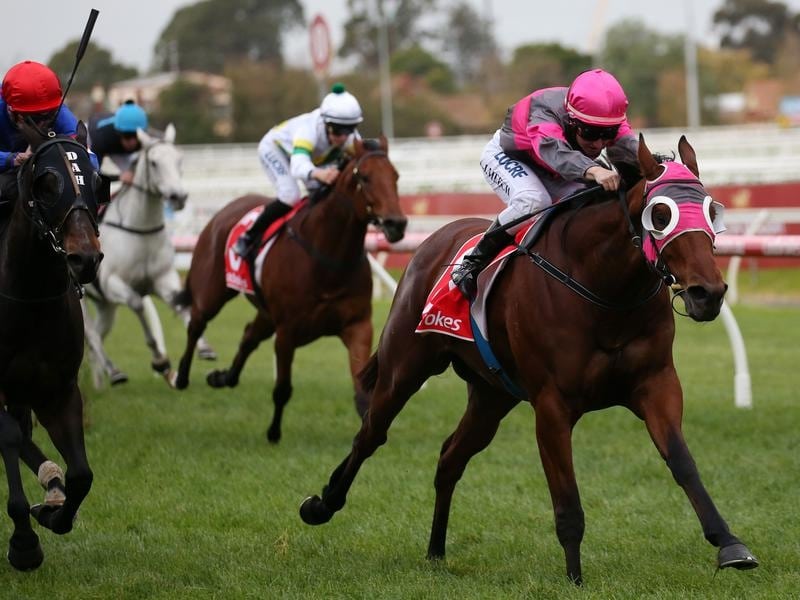 Trainer Symon Wilde will weigh up options before deciding whether Inn Keeper runs in the Regal Roller Stakes at Caulfield or the Spring Stakes at Morphettville.

Inn Keeper is one of 22 nominations for Saturday’s Listed Regal Roller Stakes (1200m) while he is among 11 initial entries for the Group Three Spring Stakes (1200m) in Adelaide.

Inn Keeper has won seven of his 10 starts and stepped up to stakes company for the first time at his most recent start when second in last month’s Group Three Sir John Monash Stakes (1100m) at Caulfield.

“We’ll just have a look at both races and try to decide which one will suit him best and which one he has the best chance in,” Wilde said.

“They have extended nominations for the race in Adelaide. We’re not 100 per cent sure what we’ll do yet.”

Wilde said weather and expected track conditions would also play a part, with Inn Keeper showing a liking for rain-affected ground although his Monash Stakes performance was on a good track.

“It doesn’t have to be heavy or anything. He just likes a bit of give in the ground,” Wilde said.

“I suppose that would sway our decision too if one track was soft and one was hard, we’d probably lean towards going to the softer going.”

Wilde said Inn Keeper was ticking over well and worked at Coleraine on Monday morning with his regular race jockey Linda Meech aboard.

“Linda was really happy with him,” he said.

Wilde said they had spaced Inn Keeper’s runs and picked out races which suit the gelding best.

“Hopefully we’ll get a longer campaign out of him doing it this way,” he said.

Voodoo Lad swept past Inn Keeper in the Monash and has since finished second to Vega Magic in the Bletchingly Stakes and won Saturday’s Group Three Aurie’s Star Handicap.

“His form out of that Monash is looking all right,” Wilde said.

“That horse has gone right on and it just shows that he’s up to it. That was weight-for-age and he probably is better suited in a handicap.

“He races on the speed and he’s bombproof.”

Wilde has nominated Warrnambool debut winner Tee Train in Saturday’s Group Three Vain Stakes (1100m) at Caulfield but said he was most likely to wait for the following week’s Listed McKenzie Stakes (1200m) at Moonee Valley.