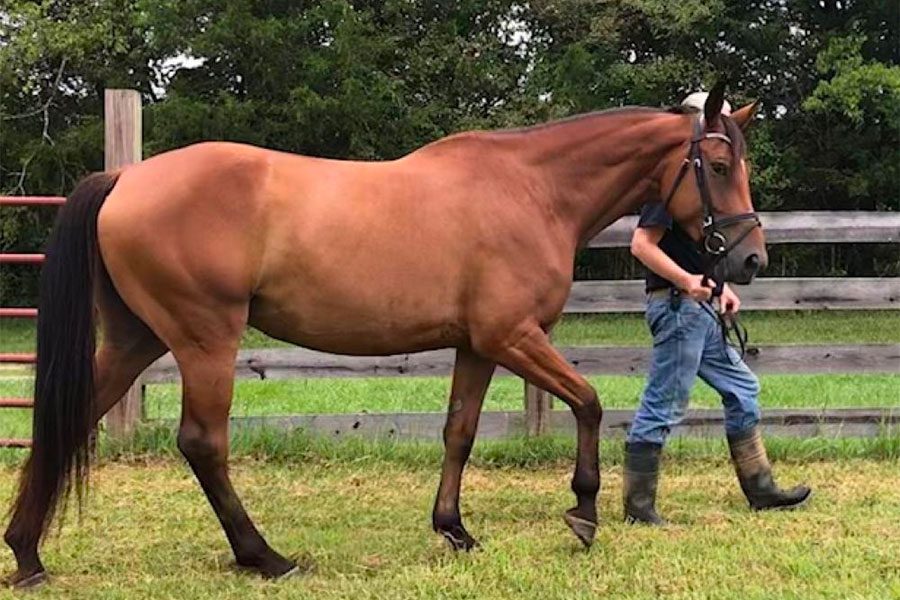 He’s raw, buckjumps during trackwork, and delivered a roller-coaster debut run for connections.

But SA Sires’ Produce Stakes hopeful Solar Blast certainly has an engine, and if he can run truly at Morphettville tomorrow, is a realistic chance of claiming a Group 3 victory at just his second start.

Solar Blast made quite an impression over 1050m last month, losing his way around the Morphettville turn and dropping back to last, before rocketing home – despite being wayward near the post – to finish third behind Prairie Flower.

Co-trainer Chantelle Jolly hopes the addition of winkers, an extra 350 metres and the booking of experienced local jockey Jake Toeroek can straighten out the horse for the AU$127,000 two-year-old feature.

“Once the penny drops for him he’ll be a really smart horse,” she said.

“He’s just so raw still and we’re trying to teach him and educate him.

“Some horses pick it up naturally, so he’s a bit behind, but he’s got ability there for sure.”

Solar Blast is around +400 in the latest markets, behind the impressive McEvoy runner Twin Stars (+180), who won the Magic Millions at Murray Bridge on debut, then followed up with a solid second to See You In Heaven in the Group 3 Breeders Stakes a fortnight ago.

Chantelle describes Solar Blast as “quirky” and admits his relatively quick progress to contesting a Group 3 event has been somewhat unexpected.

“Yeah, he’s probably surprised us a little bit,” she said.

“In trackwork he bucks quite a bit. He gets really tight and has ‘humped up’ a few times.

“So that’s why we’ve elected to put Jake on him… just to make sure he’s on his best behaviour now.

“Last start he was actually okay, beside his greenness and all that. On the way to the gates and behind the gates he was fine, and I’m sure he’ll take benefit from that and be better this time.”

The stable is confident Solar Blast – drawn barrier nine in the 11-horse field – can be in the finish, provided the cards fall into place.

“He’s done really well in the stables since his run and he’s probably switched on a little bit more, which he’s going to have to do to be competitive in a race like that,” she said.

“If he jumps a bit slow, then we’re going to have to go back from that draw. But if he jumps good then we’ll be trying to get into a more forward position and give him every chance.

“I expect him to run well. If he does everything right I think he definitely has the ability to feature…”

Meanwhile, the stable will also saddle up last-start Gawler winner Saskatoon in the 1100m SA Sprint Series final, worth $102,250.

In his first start for the stable since crossing from Victoria, Saskatoon looked to be under all sorts of pressure rounding the home turn, but kept producing for jockey Toeroek to claim a narrow win.

“I have to admit I stopped looking because I thought he was going to get beaten,” Chantelle said.

“But he kept whacking away to the line, even though I still don’t think he knows what he’s doing.

“It wouldn’t surprise me if he’s looking for a bit further.”

Saskatoon is currently an +750 hope tomorrow. Will Clarken’s Meteorite – a definite ‘black-booker’ from its first-up run – is favourite at around +350 in an open market.

NB: The opening three races card – including the Sires’ Produce Stakes – on tomorrow’s nine-race will be run on the Morphettville Parks track.