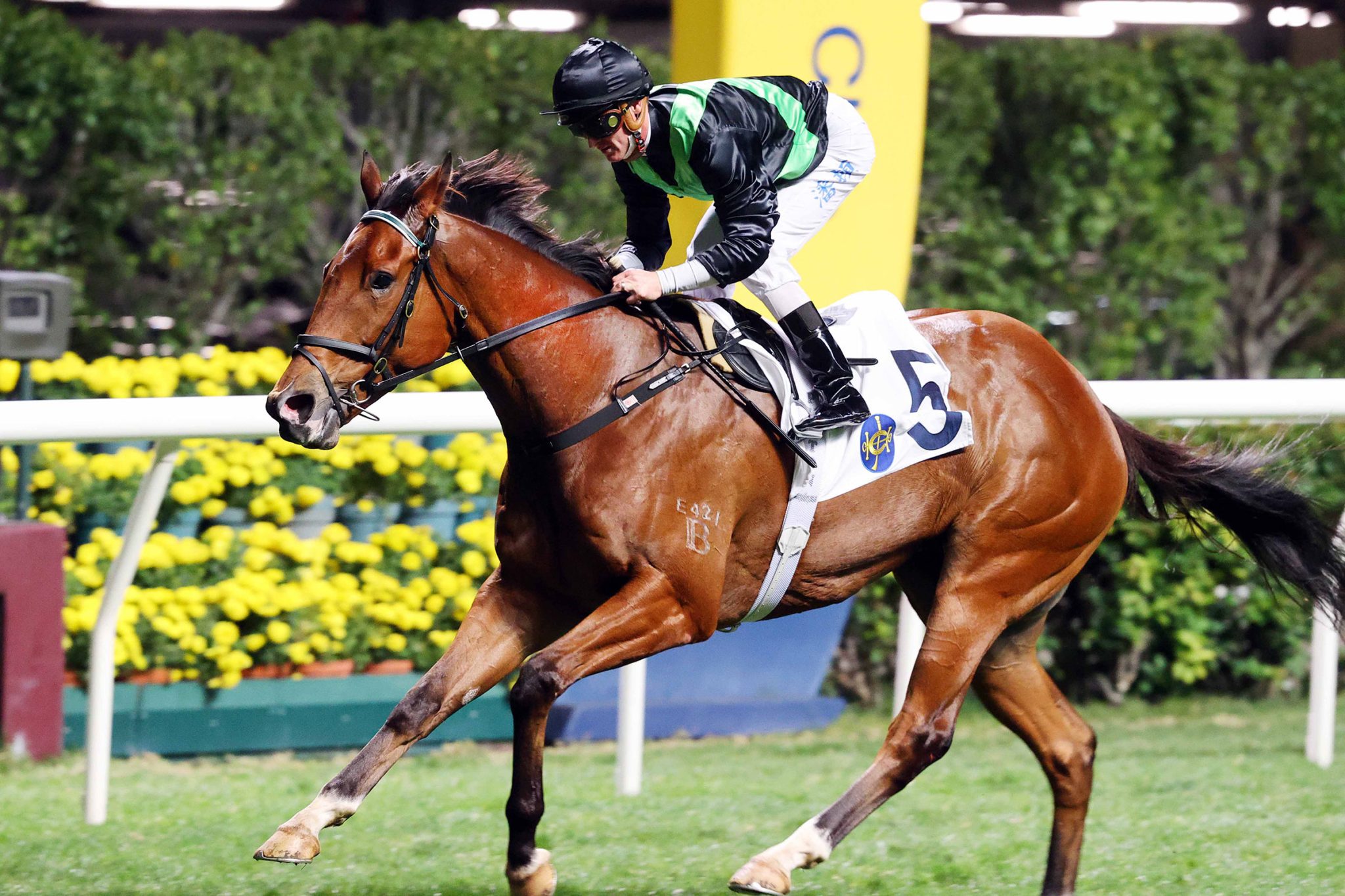 Touted as a potential future sprint star early this season, Nervous Witness has restored lustre to his reputation with a devastating win in the Class 3 Hing Tung Handicap (1000m) as Zac Purton again dominated Happy Valley with a quartet at Happy Valley on Wednesday night (9 March).

Nervous Witness’ return to the winners’ list after a career-opening pair of victories was followed by a trio of placings before tonight’s slick all-the-way triumph rewarded David Hayes’ faith in the Star Witness gelding.

“He won it at the start. He was brilliant out of the gates tonight, he just travelled on the bit and was full of confidence from the get-go – he loves it when it’s like that, so it was good to see him bounce back and do what he did,” the four-time champion jockey said.

“He finished off well, but he’s always vulnerable late. He’s such a tense horse in the run, he never switches off and gives himself that chance to be strong late but that’s him.”

Clocking 56.24s, Nervous Witness cruised into an unchallenged lead before bounding clear in the straight from Special M and Winner Method, posting a three and a quarter length margin reminiscent of gaping wins in September and October.

Continuing a remarkable ascendancy at Happy Valley, Purton has ridden 23 winners – with bags of five, four, three, four, three and four – at the past six City Circuit meetings from 52 rides. His other winners on Wednesday were HK Dragon, Joyful Mood and Telecom Cheetah, which dead-heated with Moreira’s mount Lucky Missile.

Hayes bolstered his seasonal tally to 28 when Antoine Hamelin drove King’s Capital to victory in the Class 3 Hong Tung Handicap (1800m), providing the stable with a race-to-race double.

A permanent top-five fixture in seven Hong Kong starts, Seizing The Moment was duly rewarded for his consistency with success in the Class 3 Hing Wah Handicap (1200m) for John Size and Joao Moreira.

“He’s always run nice races, but he might have needed a little bit extra encouragement,” 11-time champion trainer Size said, referencing the addition of blinkers. “Maybe they helped him travel a bit and finish a bit better.

“He’s improved marginally and it was just enough to get him to win.”

Manfred Man is banking on maturity to propel Joyful Mood to greater heights next season after the three-year-old’s triumph in the first section of the Class 4 Tsui Lok Handicap (1200m) under Purton.

“I think he will be better next season when he gets stronger and more mature,” Man said after the Headwater gelding delivered the stable’s 21st success for the season. “He was able to hang on and the jockey gave him a good ride.”

“It was a beautiful ride, it’s amazing how well a jockey can ride when they have confidence,” Whyte said. “It was just a perfect ride – and it made the difference.”

Whyte joined forces with Purton and HK Dragon, winner of the Class 4 Wan Tsui Handicap (1650m), in the pair’s first success in tandem this season after Purton charged from the tail of the field at the 600m mark in a decisive tactical coup.

“It’s just good to have him (Purton) have a winner for me because it’s a good monkey off my back and his back, I suppose. It’s been a long time between drinks – we’ve had a lot of placings (since the last win) – so when you get that first win, the ball continues to run so let’s hope there are many more to come,” Whyte said.

“He was the last horse to go into the gates tonight and the first horse out, he made a great start,” Cruz said. “He loves it here.”

Fresh from a Sha Tin double, Caspar Fownes struck again with Lucky Quality in the second section of the Class 4 Tsui Lok Handicap (1200m) for Alfred Chan, giving the reigning champion trainer his fourth winner from his past nine starters.