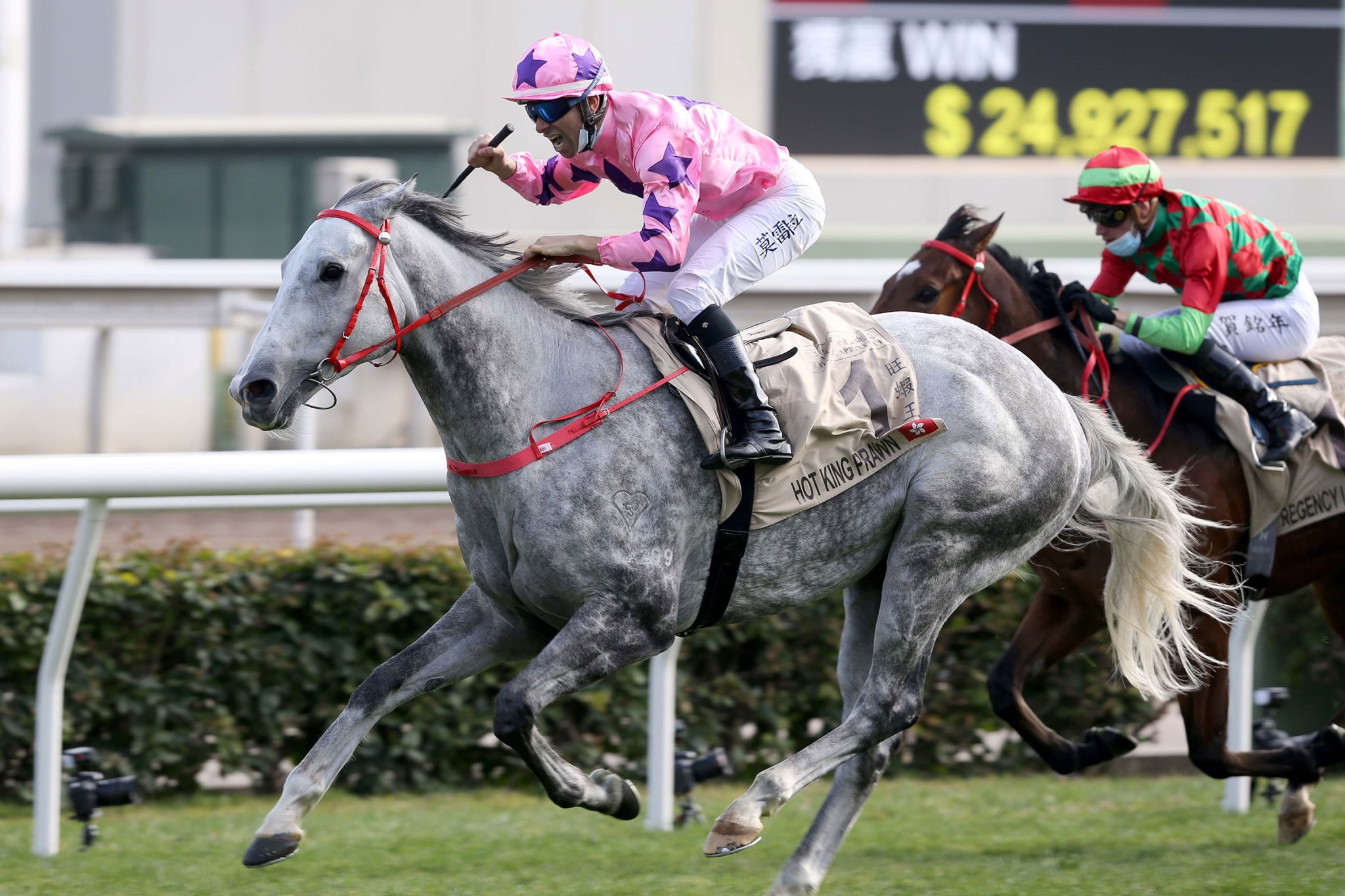 With six wins from eight rides aboard Hot King Prawn, Zac Purton has nothing but admiration for the crack sprinter but the four-time champion jockey concedes the veteran faces two significant obstacles – weight and a daunting barrier – in the Class 1 Lam Tsuen Handicap (1200m) at Sha Tin on Saturday (12 March).

Hot King Prawn will jump from the outside gate in a field of 10 and will shoulder 133lb, conceding up to 20lb to his rivals, as Hong Kong’s reigning Champion Sprinter returns following a luckless third in the Group 1 Centenary Sprint Cup (1200m) behind Stronger and Sky Field on 23 January.

Leading this season’s jockeys’ championship by six wins – 86-80 – from Joao Moreira, Purton is adamant Hot King Prawn would have notched a 13th career victory last start had he been able to gain clear running.

He is equally convinced Saturday’s contest will prove to be a stiff challenge for the sparingly-raced seven-year-old.

“He should have won that race (Centenary Sprint Cup), so the horse is going really well. His trialled good again since but that bad gate is not going to help us here in this race because there’s a fair bit of pressure and speed in it as well,” Purton said.

“So, it’s a really difficult gate for us and we have top weight in a handicap. It’s going to be hard, he’s up against it, but he’s honest and he’s going to give his best. He’s obviously capable if things go well.”

Purton partnered Hot King Prawn in the speedster’s first seven starts in Hong Kong in 2017 and 2018, winning on six occasions, before reuniting with John Size’s stalwart in January.

“He’s (still) certainly got it, John just gets him to peak at the right times in the right races.

He’s in good form but he’s just up against it in the handicaps and the way this race is going to be run,” said Purton, fresh from a Happy Valley quartet on Wednesday (9 March).

“He needs to work out his race manners a little bit better, but it was good that he got the win on the board and I think there’s a little bit more there,” Purton said.

“He’s a very laidback customer, he doesn’t do anything flash in the mornings, he doesn’t go out there to set any records or do any more than he has to do, but his action is good and he’s been pulling up well.

“He’s in good order but we’ve just got to hope he gets a good run – it’s an awkward gate (barrier nine). The positive is that he’s had that start now and fitness-wise he would have come on from the run and hopefully he would have learnt a little bit as well.”

Harry Bentley is optimistic Call Me Teddy can make a favourable impression at his first Hong Kong appearance for Michael Chang in the Class 3 Tai Mei Tuk Handicap (1000m).

Formerly trained by Aidan O’Brien when known as Lipizzaner, the Uncle Mo gelding competed for the Ballydoyle operation 12 times, winning twice and placing on a further five occasions while competing in elite company.

“I’ve had a look at his Irish and English form and I’m obviously very encouraged by what I’ve seen, actually. He’s aimed at some very good races, clearly Aidan thought plenty of him. He won the Doncaster Stakes, a Listed race, and he looked pretty impressive,” Bentley said.

“My only concern is that all of this form seems to be on either soft or heavy ground. I know he’s run on good a couple of times (but) the fact he’s going to run on much quicker than that on Saturday is a little bit of a concern but hopefully it won’t be too much of a concern.

“I have trialled him twice on the turf and he seemed absolutely fine. I’ve been very encouraged by what I’ve seem so far. He certainly has shown plenty of speed. He travels extremely well.”

With 16 victories and 48 minor placings from 270 rides this campaign, Bentley hopes to enhance that record aboard Perfect Pair in the Class 3 Tai Po Market Handicap (1400m).

“He’s been extremely consistent his last three runs and he just keeps bumping into really good horses. A third behind Romantic Warrior and Lucky With You is obviously very strong form and his second behind Beauty Live – another horse who’s going places – so clearly he’s doing something right,” the Englishman said.

“He’s bringing good form into the race and if I can get him into a nice position from the draw (gate eight), he’s going in with a live chance. There’s a lot of pace, so that’s going to help my chances.”