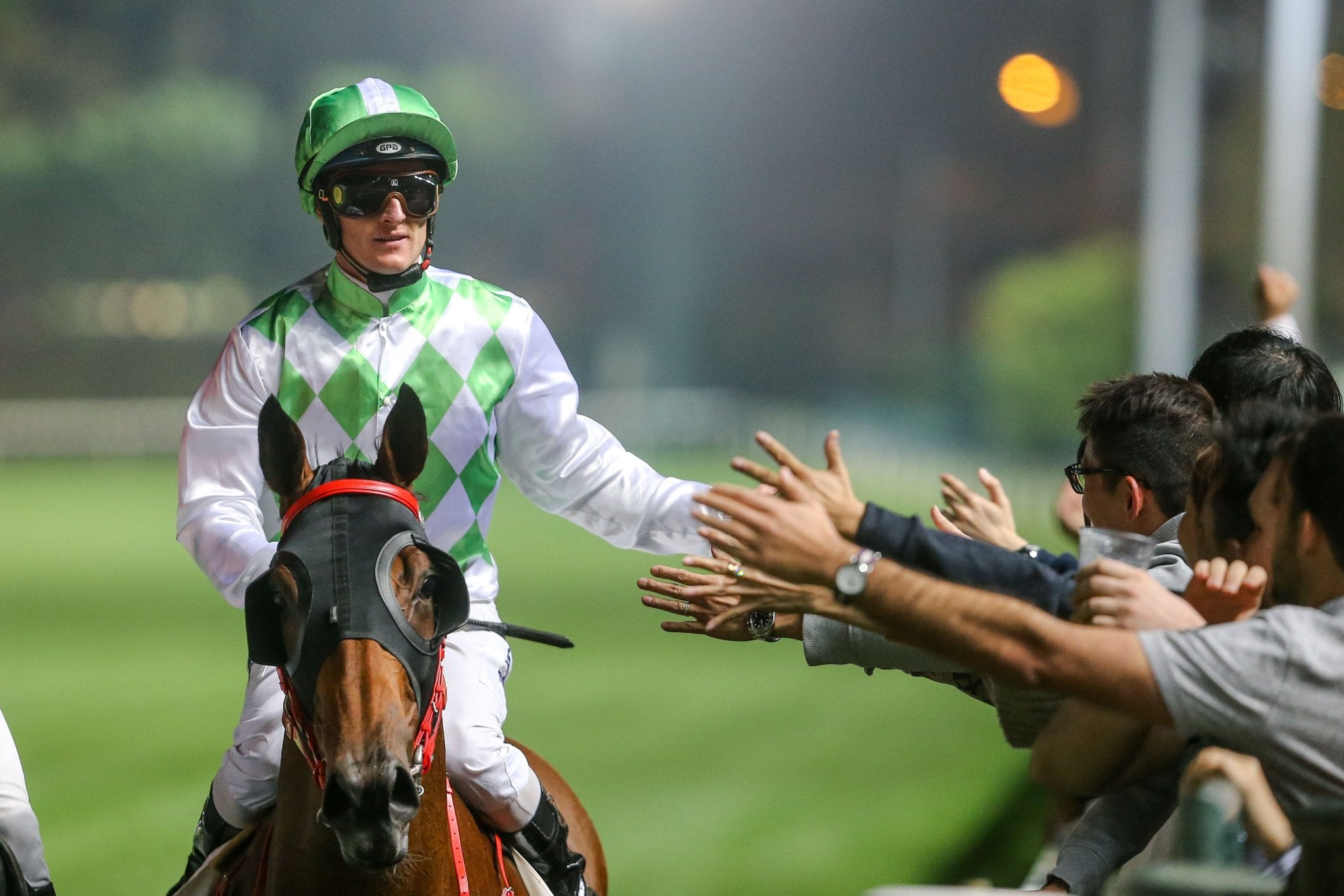 Zac Purton has conceded that Joao Moreira’s record of 170 wins in a season is likely beyond his reach but the champion jockey is certainly not easing down through the final four fixtures as he continues to stack up a mighty personal best.

The Australian ace has 156 wins on the board – 20 more than his previous best but 14 shy of the record – following another dazzling four-timer at Sha Tin on Sunday. He heads into Wednesday’s (3 July) Happy Valley fixture with a book of seven rides on the eight-race card.

Purton will climb back aboard Fat Turtle (120lb) in the night’s finale, the Class 2 Hoi Ha Handicap, in which Frankie Lor’s galloper – a 1600m winner in Australia – will stretch to 1650m for the first time, having raced exclusively at 1200m in Hong Kong. The rider was in the plate for the four-year-old’s debut victory back in March and has a record of that win plus one second placing on ‘The Turtle’, who steps out for a fifth time.

“I was hoping to draw low and get a nice soft run early on him but that’s not going to happen now. I suppose we’ll really get to see whether he can handle the distance or not.”

The rider noted, though, that the slower tempo of a mile race might be just what the Smart Missile gelding is in need of.

“We’ve been bustling him for a lot of speed in the sprint races and that’s taken a fair bit out of him, he’s been doing a good job to handle all that pressure early. At 1650, if he’s able to roll there more comfortably, maybe he can run it,” he said.

Reliable Team (133lb) is another Lor runner that benefitted from the Purton touch on debut, scoring over 1200m early last month. The three-year-old returns to the course and distance in the Class 4 Sham Chung Handicap.

“It was a good effort (on debut), he was able to jump well and get forward – that was the key – and then he ground out a good win,” Purton said. “He kept battling on quite well – he had a chance to throw it away in the early part of the straight but he found his second wind and was nice to the line.

“It’s another awful draw (9) for him and he’s got to carry more weight this time. I haven’t had a chance to look at the race yet so I don’t know how much speed is in it but we’ll be positive again and just work it out.”

The champion jockey has teamed profitably with trainer John Moore in recent months – the pair delivered three wins at the weekend including with star juvenile Aethero – and the duo will combine on Wednesday with Smart Rocket in race five and stable debutant Chefano in the Class 3 Pak Sha O Handicap (1650m).

Chefano is a two-time winner at 1800m in South Africa where he also placed in Group 2 company over a mile and steps out for the Moore stable after four Hong Kong starts for previous trainer Tony Millard.

“I’ve been able to ride him in a piece of work and he worked very well the other morning,” Purton said. “I was happy with that. His trial was just ok but it was on the dirt and the track that morning was quite wet – not many horses liked it but he came through it quite well. He looks healthy and he feels fit so hopefully he runs up to that.”