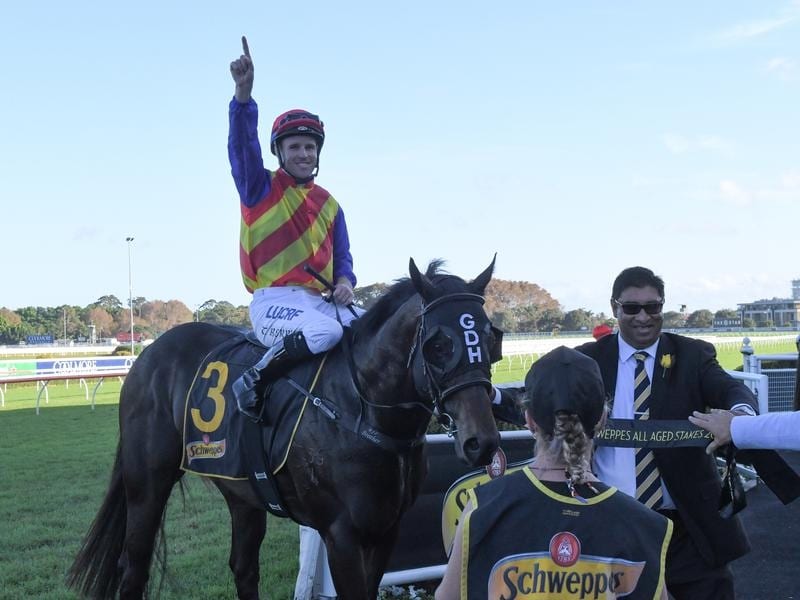 At his eighth attempt, Pierata has claimed the Group One win his trainer Greg Hickman has been banking on, winning the All Aged Stakes at Randwick.

Hickman is also a part-owner of Pierata who has earned more than $3.3 million with his value as a stallion prospect now markedly increased.

In scoring at the top level, Pierata relegated Osborne Bulls ($2.80 fav) to his fourth Group One second this autumn, beating the Godolphin sprinter by a long neck after settling better than midfield.

Pierata ($4.20) was ridden by Tommy Berry who grew up at Warwick Farm where Hickman trains and also rode the four-year-old when he was nosed out of a Group One win in last month’s Galaxy (1100m) by Nature Strip.

“We’ve been knocking on the door for so long,” Hickman said.

“He’s been running the sectionals and in his work you could see he’s been improving in his coat and attitude.

“A horse like this is life changing. I’ve got a little share in him which will help along the way and Tommy rode him 10 out of 10.”

Berry and his late twin brother Nathan, who was also a jockey, spent their childhoods around the stables at Warwick Farm until they were old enough to ride.

“They’ve always been there,” Hickman said.

“Nathan rode his first black-type winner on Rubinda for me.

“Now Tommy has won a Group One. Mum and dad have been great supporters behind the scenes and we are all pretty close.”

For Berry the win was also more significant than most.

“Greg is like family to us. I grew up with him and used to call him Cowboy when we were growing up.

“It is very special. I’ve always remembered where I come from and I love riding for the trainers out there.

“You know how hard these guys work but they don’t get the credit they deserve.”

Berry said Pierata felt like the winner from a long way out.

“He travelled so sweetly for me in the run. At the top of the rise on the better going he was able to let down with that signature turn of foot he has got.

“I thought Osborne Bulls was going to get me at the 100 (metres) but my bloke actually pulled away from him late.

“He deserved to win. He is a quality colt and I’m sure there will be a lot of studs knocking on the door now.

“The owners are passionate. They’ve stuck by Greg which is incredible when they could have sold him off a long time ago. Full credit to these guys.”

“Well he’s a model of consistency and he hasn’t let anyone down again,” he said.