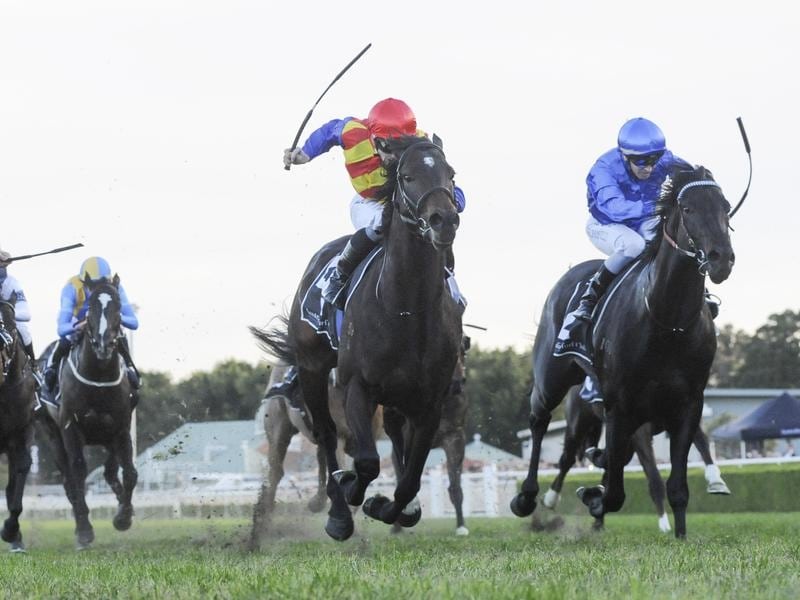 Pierata has vanquished his Kementari demons and staked a claim for a slot in the $13 million Everest with his win in the Group Two Missile Stakes.

The Greg Hickman-trained Pierata finished second twice to Godolphin’s Kementari in the autumn in the Group Two Hobartville Stakes and Group One Randwick Guineas.

On Saturday at Randwick, those defeats were relegated to the memory banks when Pierata ($4.40) held off his nemesis, the $2.40 favourite, to win by a long head.

Race leader The Monstar ($18) was another length away to run third for the second successive year.

“There are plenty of races for him if he doesn’t get a slot in The Everest.

“He has done really well and the doubts have gone from our minds now.

One of the options for Pierata is to take on Winx over 1400m in the race named in her honour on August 18 but Hickman says that is unlikely.

“I don’t want to bust him against her so we’ll keep it all open,” he said.

There are three slots left in The Everest on October 13, with Max Whitby’s vacant after an injury to Menari.

The Australian Turf Club has not named its runner and Greg Ingham’s GPI Racing is waiting to see if Chautauqua can pass at least two barrier tests to be reinstated to race.

Ingham is also a part-owner of Showtime, who finished fifth in The Missile.

Pierata is an $11 chance for The Everest with Kementari, who is also without a slot, on the second line at $6 with last year’s winner Redzel behind Trapeze Artist at $4.50.

“This horse, all he wants to do is want to please you,” he said.

“He got to them quick and he’s got great acceleration.

“Hitting the lead at the furlong (200m), that was a bit of a mistake but as a racehorse, he ticks all the boxes.”

While The Everest is on people’s minds, The Monstar’s trainer Brett Cavanough has a different mountain to consider.

Cavanough is based at Scone meaning The Monstar is eligible for The Kosciuszko for country-trained horses on The Everest program.

“It’s set weights and penalties so he won’t get more than 60 kilos unless of course he wins a Group One and I don’t see that happening,” Cavanough said.