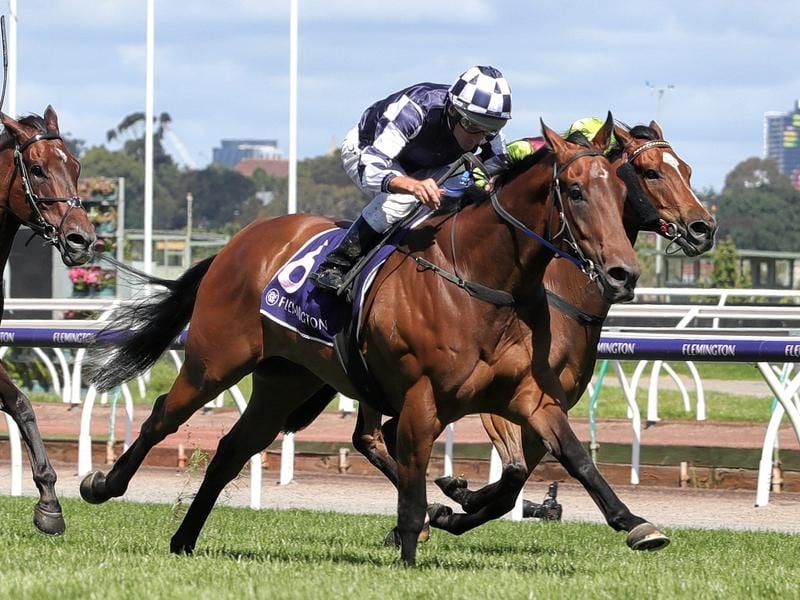 Trainer Danny O’Brien will resist the temptation of aiming too high too soon with Order Of Command after the gelding got himself out of trouble to score at Flemington.

Order Of Command’s win in Saturday’s Festive Season Sprint completed a double for O’Brien after taking out the Santa’s Workshop Plate with My Pendant.

While My Pendant has earned a break before heading towards autumn stakes races, O’Brien is content to keep Order Of Command racing in restricted grade for the immediate future.

But O’Brien believes Order Of Command has the potential to win at black-type level.

Ridden by Damien Oliver, Order Of Command, the $2.25 favourite, scored a three-quarter length win from Demolition ($4.20), with Gwenneth ($51) a half-head away third.

Order Of Command has now won four of his 10 starts with his last two coming at Flemington.

“He always seems to hit the afterburners when he gets to the clock tower,” O’Brien said.

“That’s what you need in these straight races and he’s a lightly raced horse that knows how to win a race.

“It looks like he’ll get to stakes level at some stage but the Standish Handicap (on New Years Day) may be a little too soon.

“He’s got form around Nature Strip and Brave Song and they’re already stakes winners, so I’m sure he’ll get there.”

Oliver said Order Of Command was a dream horse to ride.

He said he travelled, had a good kick when required but there were nerves inside the final 200m when giving the leader Gwenneth three lengths start.

“There were a few nervous moments when the leader took off and that left us a bit flat-footed but he was strong over the last 100 metres,” Oliver said.

Like O’Brien, Oliver believes Order Of Command can reach a higher grade.

“The Standish is there but he’s going to be a bit out of the handicap,” Oliver said.

“Danny’s doing the right thing and I think he can pick up a few more races before getting to a higher grade.”