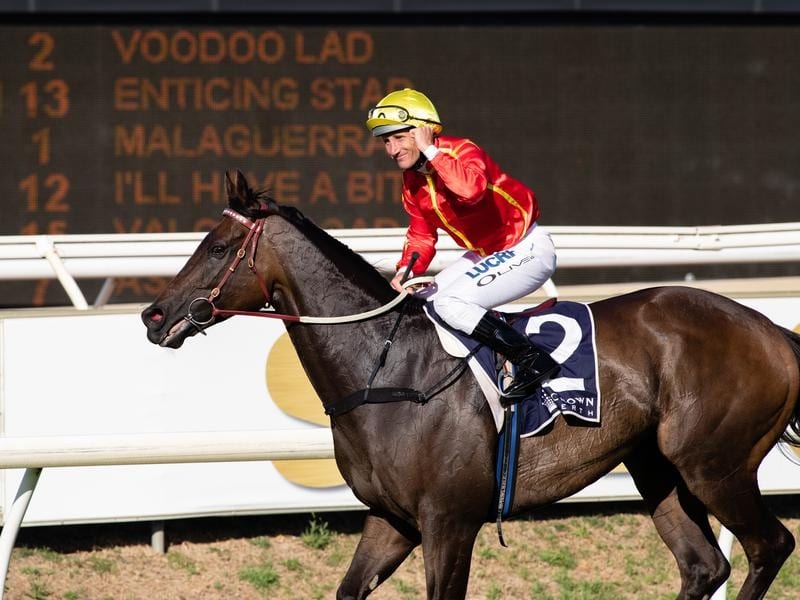 An unusually emotional Damien Oliver has celebrated a Group One success on Voodoo Lad in the Winterbottom Stakes at Ascot.

Although he has been based in Melbourne for decades, Oliver remains Perth’s favourite son and returns to the summer carnival when he can.

Voodoo Lad is from the Victorian stable of Australia’s most prolific trainer, Darren Weir, who also showed his pleasure when Oliver brought the gelding from last to win the $1 million 1200m-sprint.

“The horse thoroughly deserves that because he has missed a Group One win before by a short margin,” Weir told Sky Thoroughbred Central.

“When he got to the outside at the 300 (metres) I got excited and I could see he was launching and at the 100 I was really excited.

“It’s a massive thrill and geez it was some ride.”

Oliver is Australia’s most successful active jockey with the Winterbottom win his 115th at the highest level.

“I am a bit emotional,” Oliver said.

“I love coming home. This is where it all started for me and it’s great to be here in front of my Mum.

“I always thought this horse would be suited by this race, a high pressure 1200 metres and he sowed that today.”

Voodoo Lad ($13) beat local Enticing Star ( $6) by three-quarters of a length with another Victorian, the Peter Gelagotis-trained Malaguerra ($15) another length third with the first three all coming from behind.

Favourite Viddora ($2.40) finished 11th of the 14 runners after getting boxed in then failing to show her usual sprint at the end.

Oliver has a perfect record on Voodoo Lad, winning the Group Three Aurie’s Star at Flemington at his only other ride on the gelding.