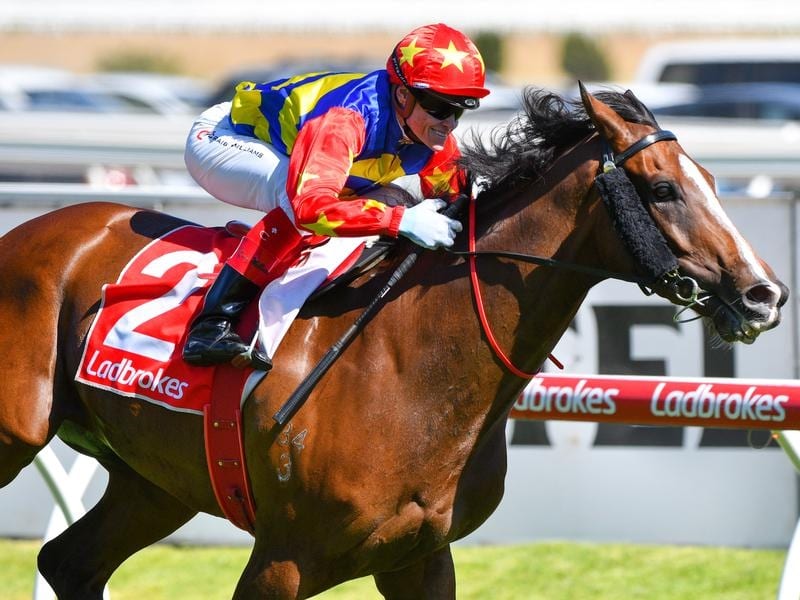 Odeon has broken a winless streak of 779 days with victory in the Listed Lord Stakes at Caulfield.

Co-trainer Simon Zahra said Thursday’s victory was like winning a Group One race after the gelding had been winless for so long.

Providing Craig Williams with the third leg of a winning treble, Odeon was sent off the $3 equal favourite before defeating co-favourite Future Score by 1-1/2 lengths with Gold Fields ($10) a length away third.

While winless for an extended period, Odeon was consistent and in the 19 starts since that Flemington win had finished in the top five on 16 occasions.

“There was a lot of pressure on today and it was like winning a Group One race,” Zahra said.

“He’s an honest sort of horse, but things haven’t quite gone his way and a lack of fitness probably told the other day.

“You can see why we get frustrated when they win like that.

“You know they have a ton of ability when you watch them work Tuesday and Friday and gallop like they do, but they can’t win a race.”

Zahra said that win a little over two years ago had pushed Odeon up too high in the ratings and because of his consistency had continued to be around a similar mark.

Odeon had a peak rating of 99 while he raced off a handicap rating of 96 on Thursday.

“He got rated out of a lot of races which is why I harp on about it,” Zahra said.

“With horses like him you can see what they can do, but he’ll get another four or five (points) today and that will make him hard to place.

“You get frustrated in that sense, but he always goes out and tries.”

With the expected ratings rise, Zahra said he and co-trainer Mathew Ellerton would need to study the calender to find a suitable race.

“He’s got another Listed win in him somewhere I think,” Zahra said.

“He enjoys Caulfield, he enjoys that quick tempo, so we’ve got to keep him to those races where we know we’re going to get a fair bit of speed.”