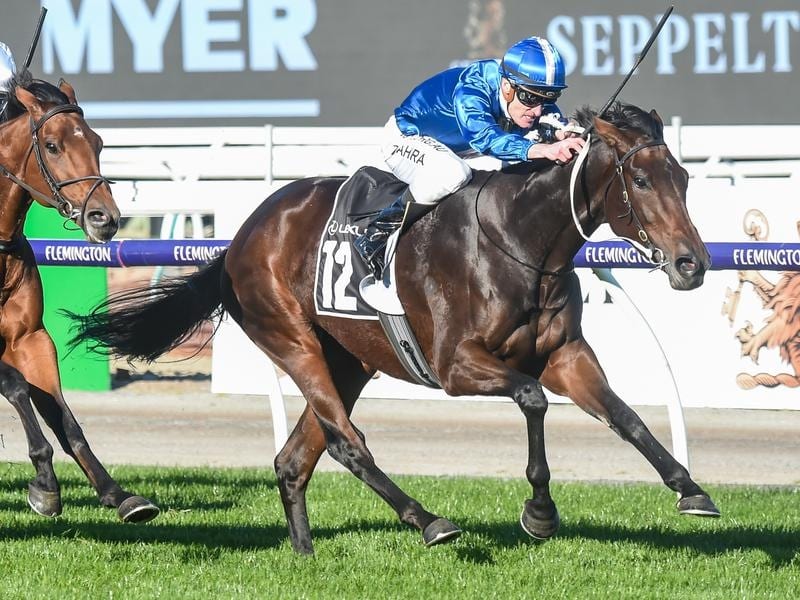 Oceanex has upset a betting plunge on favourite King Of Leogrance to book a place in the Melbourne Cup with victory in The Andrew Ramsden at Flemington.

Success in Saturday’s 2800m race affords Oceanex a ballot exemption into the Melbourne Cup in November.

The Andrew Ramsden was shortened from 3200m last year with the Victoria Racing Club granting a ballot exemption for the first time which Steel Prince claimed in a nail-biting finish from Surprise Baby.

Oceanex is prepared by Mick Price and Mick Kent Jr and she will be their first Cup runner.

Price said Melbourne Cup horses were not a part of his business model, but is more than happy to make the exception this year.

“There’ll be a bit of nerves now,” Price said.

“These owners, they’re like mums and dads, the Bon Beach footy club boys are in it.

“It’s going to be a sensational story.”

Price said he followed the recommendation of English jockey Tom Marquand to stretch Oceanex out in distance.

Marquand rode Oceanex on two occasions during the autumn before the mare won the Port Adelaide Cup at Morphettville earlier this month.

“Tom Marquand rode her Sydney and said ‘do you want to try this over a mile and a half’,” Price said.

“So her first go at 2500 (metres) in Adelaide was strong and today was fantastic.

“I know she drew barrier one and got the gun ride, but she beat the right horse in the race and she won convincingly.”

With the majority of the Price and Kent Jr horses in the sprinter-miler mould, Price said he has not given a lot of thought how Oceanex will get to the Melbourne Cup.

“I’ll have to think about it now, the pressure is on,” Price said.

“She hasn’t had a grinding stayers prep or anything. She’s got a beautiful clean set of lungs and she stays.”