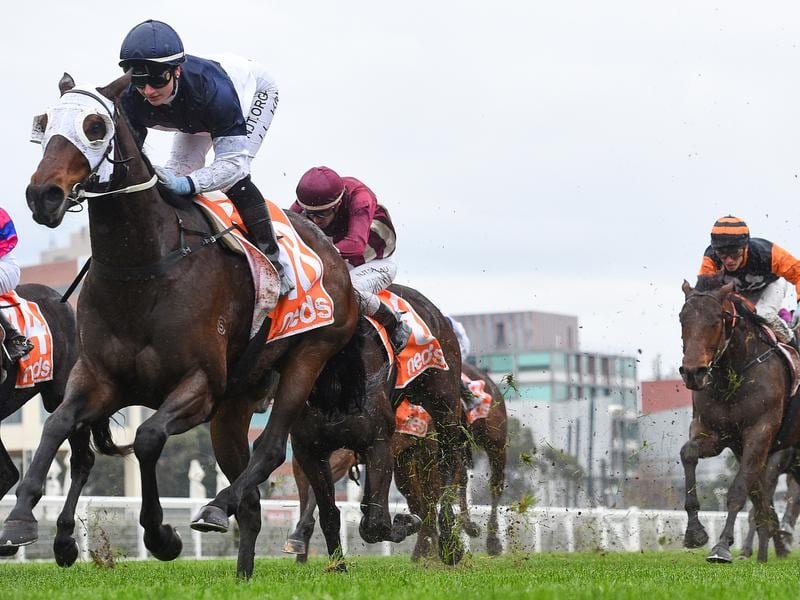 Staying mare Oceanex, who is guaranteed a start in the Melbourne Cup, is set to resume at Caulfield two weeks earlier than originally planned.

Michael Kent Junior, who trains in partnership with Mick Price, said they were initially going to wait for the Makybe Diva Stakes at Flemington on September 12.

However, given they are unable to use public trials, the mare will now kick off over 1400 metres at Caulfield on August 29 to get her fitness up.

Oceanex has been off the scene since she booked her spot in the Melbourne Cup by winning the Andrew Ramsden Stakes in May.

Price and Kent Junior were to the fore at Caulfield on Saturday, winning the Group Three Vain Stakes with progressive three-year-old Our Playboy.

They are hoping to again make an impact at the McKenzie Stakes meeting at Moonee Valley this weekend with last-start winner Tavidance in the Quality Handicap (2040m).

“We’re in no hurry to place him out of his grade,” Kent Junior said.

“He’s a benchmark 82 so we can work our way up through the ratings.

The stable has also recently welcomed former Queensland colt Wisdom Of Water, who has impressed them since joining the team.

The former Toby and Trent Edmonds sprinter, who has won three of his six starts including the Group Three Ken Russell Stakes at the Gold Coast, will be aimed at the feature three-year-old sprints.

“He’s a lovely colt and he’s shown a lot of talent in his two jump outs,” Kent Junior said.

“He’ll be set for the Danehill Stakes, the Blue Sapphire and the Coolmore Stud Stakes.”