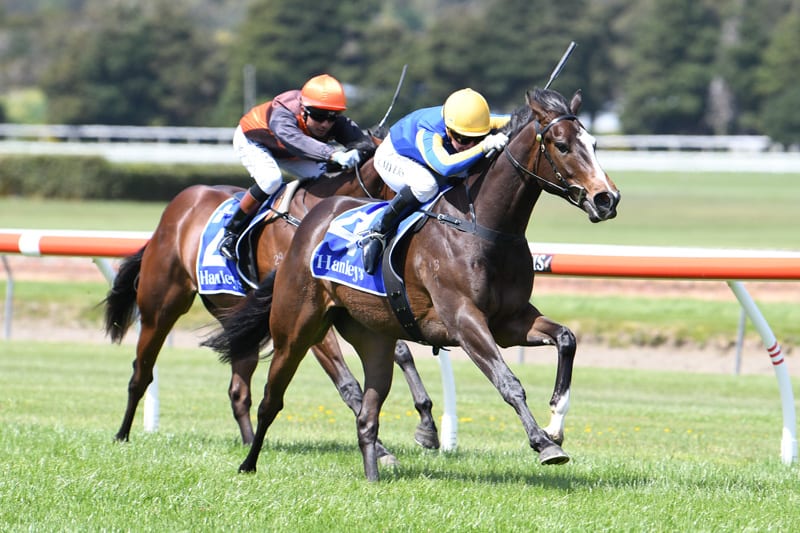 Pukekohe visitor Play That Song backed up an impressive debut win at Ruakaka earlier in the month with another dominant performance to take out the Listed Hanley Formula Wellesley Stakes (1000m) at Trentham on Saturday.

The Nigel Tiley-trained filly had looked a complete professional as she went about her work at Ruakaka and gave that impression once again at Trentham despite appearing to flounder in the Heavy11 rated track conditions approaching the home straight. Forced to stand in the barriers for a considerable time before the recalcitrant De La Terre was declared a late scratching due to a refusal to load into her starting gate, Play That Song bounced nicely for rider Rosie Myers who positioned her mount outside the speed throughout.

Although heading sideways for a few strides across the Trentham junction, Play That Song quickly hit top gear in the run home as she put a break on her nearest challengers before coasting home by just over a length from debutant Power ‘n’ Glory, who made up good ground late in the piece.

Tiley, who had scored with Hunua Hank one race earlier at Ellerslie, had been confident of a good performance from the Showcasing filly after she had trialled well on a heavy surface prior to making her raceday debut. “She had trialled up well on a heavy track although there are heavy tracks and then there are Trentham heavy tracks,” Tiley said. “She won really well (at Ruakaka), has a good turn of foot and really wants to compete. “I didn’t know if she would handle the track out there today and she did struggle across the junction but once she got on the right leg in the home straight, she did it nicely.”

Tiley is undecided about the future path for his charge and won’t make any further decisions until she has spent some time in the paddock after returning home. “She is Karaka Million nominated and that is an option for her but, given she is a filly, getting more black type is equally as important,” he said. “She will have a few days out when she gets home and if she bounces through the run then we could have a look at the two-year-old race at home on Counties Cup Day. “If she takes a little longer to recover then she can come back after Christmas.” Tiley was referring to the Listed Construction 2YO Stakes (1100m), a race that he won with classy filly Melt in 2017, that will be run at Pukekohe on November 23.

A $40,000 purchase by Tiley from the Windsor Park Stud draft during the Book 2 session at Karaka in 2019, Play That Song is raced by Tiley, his wife Lee, his sister-in-law Mandy Rutherford along with Alex Opie and Richard Cole. She is out of the Falkirk mare, Supreme, who is a daughter of Group 2 Matamata Breeders’ Stakes (1200m) winner Maxamore.