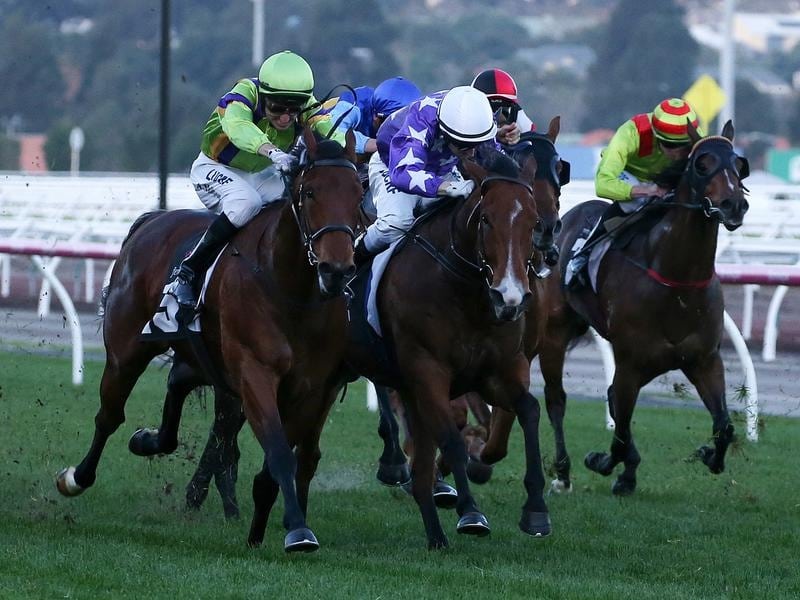 Craig Newitt will make the trip to Melbourne to continue his association with Tasmanian filly Derasa at Caulfield and is confident the filly has the quality to overcome the outside barrier.

Tasmanian-based Newitt came to Melbourne earlier this month to ride the Barry Campbell-trained Derasa in a 1000m-sprint for three-year-olds at Flemington and the filly finished a close fourth in her first interstate appearance.

Derasa returns to Melbourne for Saturday’s Keno Kwikpik Handicap (1100m) and was on the third line of betting at $6 on Thursday with the Danny O’Brien-trained Group Two winner Summer Sham the $3.30 favourite.

“She stuck on well at Flemington but she just got lost down the straight,” Newitt said.

“Back around a corner at Caulfield in fillies grade it looks a very good race for her but she has drawn an ordinary barrier.”

Newitt said the plan would be to press forward on Derasa and race on the pace.

“I’d expect her to be pretty hard to beat,” he said.

“I’m pretty confident she will still be able to overcome it. I think if she had drawn a gate she would probably start favourite.

“Obviously Danny O’Brien’s horse looks like she’s probably the best filly in the race but we’ve got fitness on her and we’ll go forward and put ourself on the speed.

“Win, lose or draw she’ll go to the paddock after Saturday and she’ll be set for the better races here (in Tasmania).”

Newitt, the winner of 33 Group One races, relocated from Victoria to his home state early this season.

He leads the Tasmanian premiership with 71 wins and while Derasa is the main reason for him making the trip to Caulfield, he has also secured another six rides at the meeting.

Newitt went to Adelaide last Saturday and rode a winner for Jarrod McLean on Tried And Tired.

Derasa has won four of her eight starts been placed three times and Newitt has ridden the filly in four races for three wins and her fourth at Flemington.