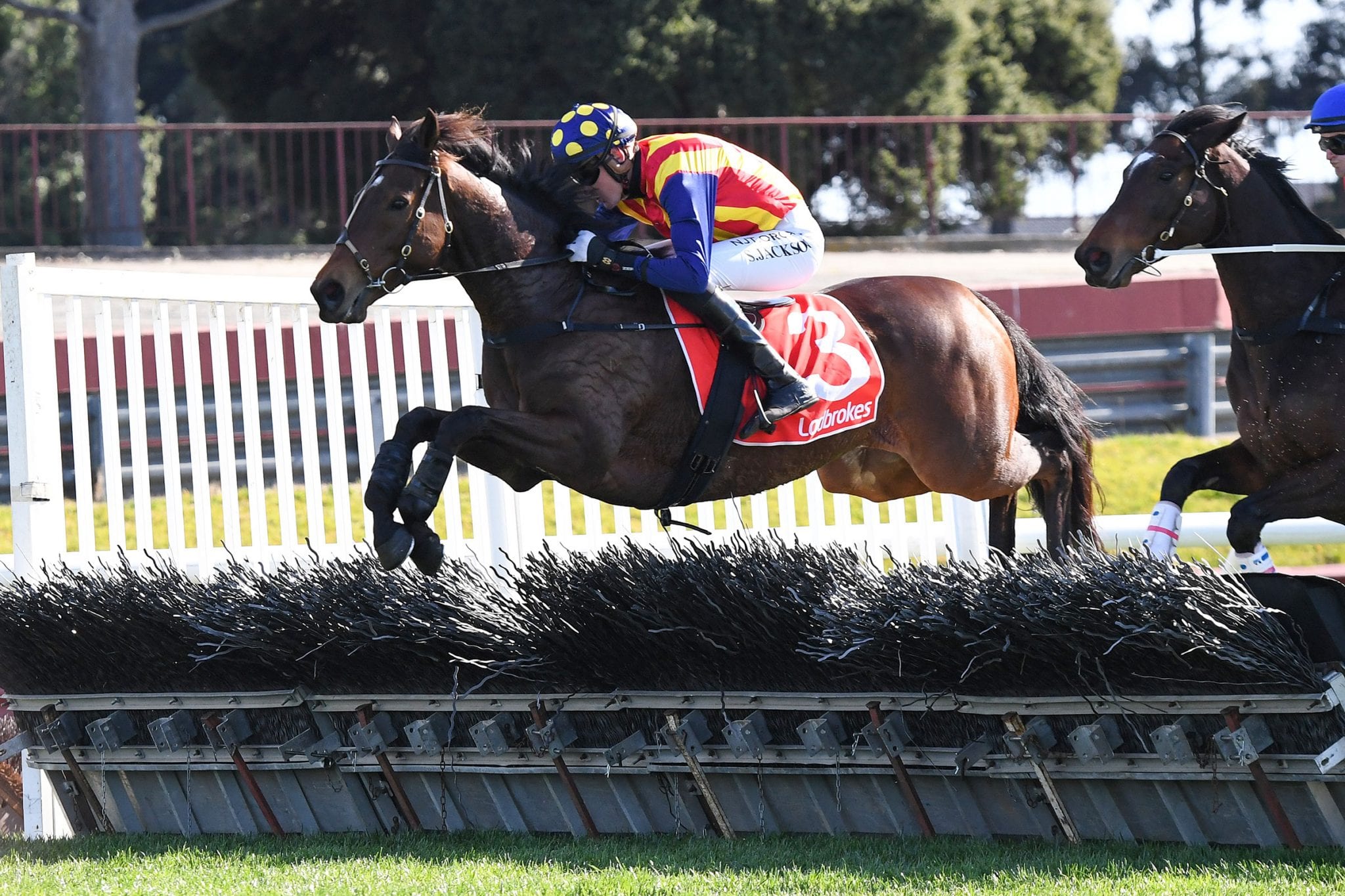 Kiwi jumpers were again to the fore at Sandown on Grand National Hurdle day, taking out the two jumping features. Former South Island galloper Ablaze took out the A$250,000 Grand National Hurdle (4200m) after leading throughout under Shane Jackson, while Slowpoke Rodriguez won the A$125,000 Crisp Steeplechase (4200m) by a comfortable five lengths. For good measure, Wolfe Tone, a New Zealand bred son of Mettre En Jeu made it back-to-back hurdle wins for trainer Francis Finnegan in a Benchmark 120 Hurdle.

But undoubtedly versatile galloper Ablaze, a son of Raise The Flag, was the star of the show on Sunday for winning trainers Ciaron Maher & David Eustace, proving too strong for fellow former Kiwis Bee Tee Junior, who closed well late, and Gobstopper. “I get a great kick out of that,” Maher said. “I’ve never won a Grand National Hurdle so it’s a big thrill.

“This horse has been phenomenal since coming over here from New Zealand. Thankfully Rod (Lyon, part-owner) was having a beer in a pub with the other owners of the horse in the South Island and they decided to buy him and send him over. “We wanted to run him in the best races for the best purse and didn’t want to run him during the year. He’s only a neat horse and we didn’t want the weight to catch up with him. It’s a great job by the team and a fantastic ride by Shane Jackson.”

Maher said the plan had been to lead with the versatile galloper given the lack of tempo on paper and for the most part the nine-year-old gelding, who commenced his career with Brian and Shane Anderton, jumped cleanly. “He was a bit lairy in front, actually, at a couple of his hurdles,” Maher said. “You could see him flicking his ears and he looked like he was really enjoying himself. He just got underneath one at the top of the hill both times. It must just be half a stride out for him or something, but Shane really let him roll down the hill and use that weight advantage and his staying ability. It was bloody ten-out-of-ten. “What a thrilling race. I thought we were home pretty easy and they made a late charge. Onwards and upwards now to the Grand National Steeple.”

The A$350,000 Grand National Steeplechase (4500m) at Ballarat on August 23 shapes as a mouth-watering contest, with the Patrick Payne-trained Slowpoke Rodriguez, who sports the colours of Wanganui trainer Kevin Myers, and reigning champ Tallyho Twinkletoe, who finished fifth in today’s Grand National Hurdle after making a late mistake, also heading towards the feature steeplechase.

Ridden by Steven Pateman, Slowpoke Rodriguez came off a strong tempo to win comfortably and repay the patience shown by Patrick Payne, after the horse had battled some tendon injuries. “We always said he deserved to win a feature and now he’s won two on the trot,” Pateman said of the son of Istidaad. “He’s an absolute dude of a horse and he’s a pleasure to ride.

Pateman, who earlier rode Tallyho Twinkletoe, who looked to be travelling well before nearly parting company at the last, indicated he would probably lean toward the reigning champion and said Slowpoke Rodriguez was aided by the firmer ground at Sandown on Sunday.

“Tallyho Twinkletoe was awesome,” Pateman said. “I was confident during the run. It’s not his fault, he was trying hard and just one of those mistakes from him trying so hard. I feel that he wasn’t done with. But that’s the game and hopefully he pulls up fine and he’ll be really hard to beat in the Grand National Steeplechase.”