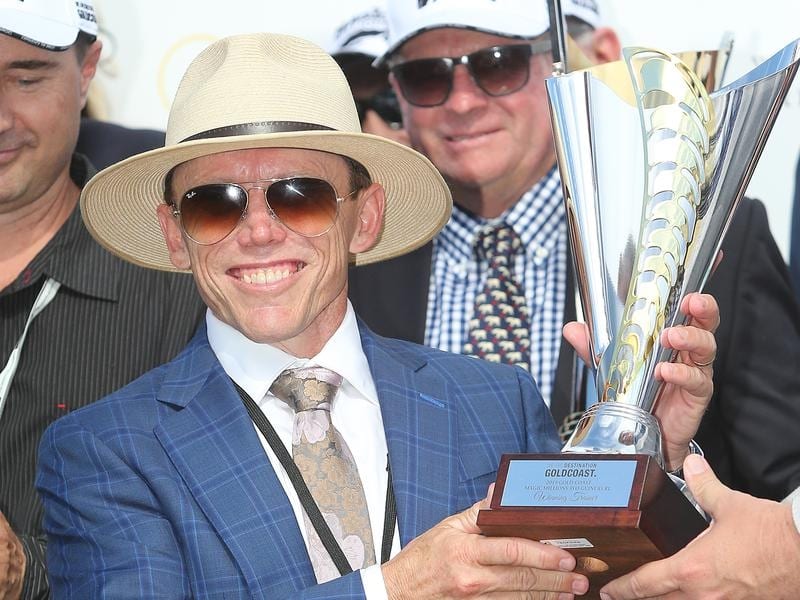 Brisbane trainer Chris Munce has provided HorseBetting with an update on his fancied runners ahead of Saturday’s Doomben 10,000 meeting, where he has seven horses nominated.

Currently seventh on the Queensland Metropolitan Trainers’ Premiership ladder with 18 wins in the 2021/22 season, the jockey-turned-trainer is hoping to add to that tally this weekend as he saddles up some very nice Brisbane Winter Carnival prospects.

Munce started two horses – Allude and Rhapsody Rose – at last Saturday’s Hollindale Stakes meeting on the Gold Coast, where both horses failed to “pick their feet up” in the testing conditions, with the trainer declaring the meeting as a “waste of time”.

With more wet weather forecast in Brisbane right throughout the week, Munce wouldn’t be disappointed to see the Doomben card transferred across the road to Eagle Farm, should the Brisbane Racing Club and Racing Queensland come to an agreement on that decision.

“There is some suggestion that it (Doomben) might go to Eagle Farm – I don’t know, at least they’ll have the meeting I suppose – if they go to Doomben, the meeting might not even go ahead,” he told HorseBetting.

“They (Allude and Rhapsody Rose) pulled up alright, but they obviously couldn’t pick their feet up in it. Waste of time.”

Wet no worry for Southern Stock ahead of Rough Habit Plate

This weekend, three-year-old gelding Southern Stock will lead the Munce yard, as the son of Tavistock lines up in the Group 3 Rough Habit Plate over 2000m.

The galloper was very good late last start in the Queensland Guineas, closing off stylishly to run sixth, thus stamping himself as a genuine Queensland Derby (2400m) prospect.

“He handled the wet that day he won there two starts back, so I don’t think the wet will worry him,” Munce said.

“I mean he ran well on the dry the other day as well, so he’s pretty adaptable. I don’t think it’ll really matter what sort of a track we get, I think he’ll handle it and should race pretty well.

The trainer has also nominated three classy mares for the Listed Bright Shadow (1110m), with last-start winners Boomnova and Centrefire nominated along with the highly talented four-year-old Palaisipan, who holds a Stradbroke Handicap (1400m) nomination.

Boomnova was a gritty first-up winner at Eagle Farm last Wednesday, kicking off her campaign in style as she looks to progress through the grades.

“She sort of had to win the other day to get her rating up and a bit more prizemoney too. She’s still in a bit of a tricky area as far as that goes.

“She’s going well, I just hope she gets a run.”

Centrefire was also an impressive first-up winner, defeating Sir Warwick on April 23 at Doomben over 1110m in a Benchmark 90.

The five-year-old had never previously won on a heavy-rated surface, so the tough victory on a Heavy 8 track surprised her trainer.

“She went terrific. I was pleasantly surprised,” Munce said.

“I didn’t expect her to go that good – particularly on the Heavy track – I never really had her down as being able to handle the wet, but as it turns out she does, or she did.

“She’s just flying on all 18 cylinders at the moment. I couldn’t be happier with the way she’s going.

The third runner in the Fillies & Mares race that Munce has nominated is five-times winner Palaisipan.

The rather lightly raced daughter of So You Think has been in the first two in seven of her eight career starts, with her only failure coming in the Group 3 Winx Guineas (1600m) last July on a Soft 6 track.

With the testing conditions expected, Munce says that the mare may not take her place, but he needs to get her preparation started if she is to reach the Stradbroke next month.

“She’s not really suited in the wet,” he said.

“In a way, I hope they do move the meeting to Eagle Farm, because she’s got to get the show on the road or she’s going to run out of time.

“Her form suggests that she’s the best of the three, but I’m just not confident with her on the wet at all. I don’t know what to do or where to go with her at all at the moment, but she’s nominated and I would say if she happens to get a run, she will run, just to get the show on the road.”

Although the majority of Munce’s runners will start in Brisbane on Saturday, he has nominated last-start Ipswich winner Dash For Dreams in the Group 3 Dark Jewel Classic (1400m) at Scone, as well as a Benchmark 85 Handicap (1350m) at Doomben.

“She’s also nominated for Scone this weekend – I’m just not sure – the weather might determine where we run with her.”