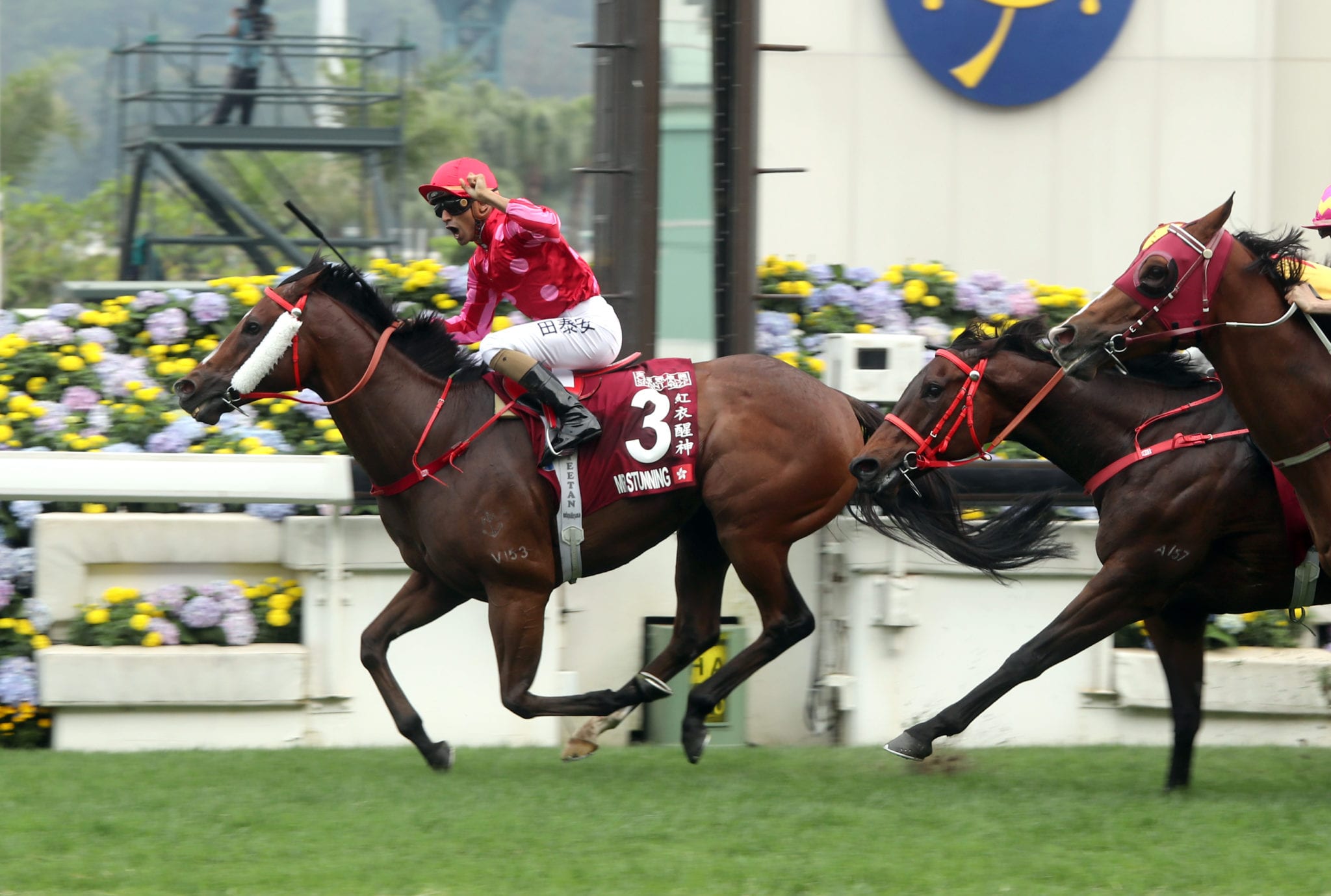 Mr Stunning lived up to his name and cemented his place as one of Hong Kong’s finest sprinters yesterday afternoon (26 April) at Sha Tin with a +2000 victory in the HK$18 million Group 1 Chairman’s Sprint Prize (1200m).

The Frankie Lor-trained gelding put age and injury woes behind him to become only the third seven-year-old to succeed in the race’s 41-year history.

Mr Stunning was withdrawn from this race last year due to a hairline fracture in his shoulder but today capped a successful return with the third Group 1 success of his career and first win since the 2018 Group 1 LONGINES Hong Kong Sprint, also with Karis Teetan in the plate.

The Australian-bred joined Dim Sum (2011) and Lucky Nine (2014) as seven-year-old winners of the Chairman’s Sprint Prize, while Joy And Fun landed the 2012 edition as an eight-year-old.

“He’s a seven-year-old now but this season, for me, he’s always been very close, unfortunately last season he had that shoulder problem but now everything’s good,” Lor said.

The race unfolded perfectly. A gap appeared at the 250m mark and the Exceed And Excel gelding burst through to score in a time of 1m 08.40s ahead of Big Time Baby and Thanks Forever, who rounded out the top three.

Lor’s masterful training, nursing the horse through a patient and measured process, paid handsomely in the form a first-prize cheque of HK$10.2 million.

“Because of the hairline fracture he had, I can’t push him too hard, especially as he is an older horse, that’s why this time I didn’t trial him before this race – we just freshened him up,” Lor said.

Slated to retire after this run, that decision may be put on hold.

“We planned this to be his last run but let me talk to the owner and we will decide and see what he thinks about the horse – he was my first Group 1 winner, I’m very happy for him,” Lor said.

The handler tallied 130 Hong Kong wins in his first two seasons, and this, his third season, has brought 33 wins so far but at a slower rate.

“My stable this season has been so-so, the ratings go up and then the new horses cannot catch up so they need more time,” Lor said.

Karis Teetan was full of praise for Mr Stunning who took his career earnings to HK$60,843,100.

“I just had so much horse underneath me – I was tracking a few horses who are decent enough to take me into the race and I was just waiting for a gap to open. This horse, his heart is bigger than him, so I knew he would let down as soon as he got that run,” Teetan said.

“I planned to make sure he got a good jump, he’s getting older this horse so he can miss the jump, I spoke to Frankie (Lor) and said we need to give him a warm up first and make sure he gets the break again,” he continued.

“Once he came out smartly, I just had to work him a little bit to get him into a handy position, I found myself three-deep and once I got in behind a few horses he dropped anchor and started travelling nicely.”

The in-form rider’s second Hong Kong Group 1 win capped a treble, having scored aboard True Legend for Lor and Lakeshore Eagle for trainer Chris So.

“It was a nice, consistent run, he’s just come back from Dubai a little too fresh and he’s going to improve out of this run,” jockey Matthew Chadwick said.

“The winner was just able to get out, I was hoping he’d get stuck in traffic because I thought I had the others covered. He was a bit nervous in the gates so he wasn’t as sharp out as usual – maybe the trip over to Dubai and back was something to do with that.”

The John Moore-trained Thanks Forever notched his third Group 1 placing this season with a strong run from deep.

“I think if he’d drawn a gate and laid up a little closer he could have won. He had to make it up from the 400 (metres).”

The Moore-trained race-favourite Aethero, who broke cleanly to lead, faded to last and was found to have bled.

“It’s disappointing but we’ll make sure he’s alright and then I’ll sit down with the owner and we’ll have to discuss the best thing for him,” Moore said.

Later in the day, the handler’s Beauty Generation placed a short-head second to the Caspar Fownes-trained Southern Legend in the Group 1 FWD Champions Mile, while the Group 1 FWD QEII Cup went to the Tony Cruz-trained Exultant.