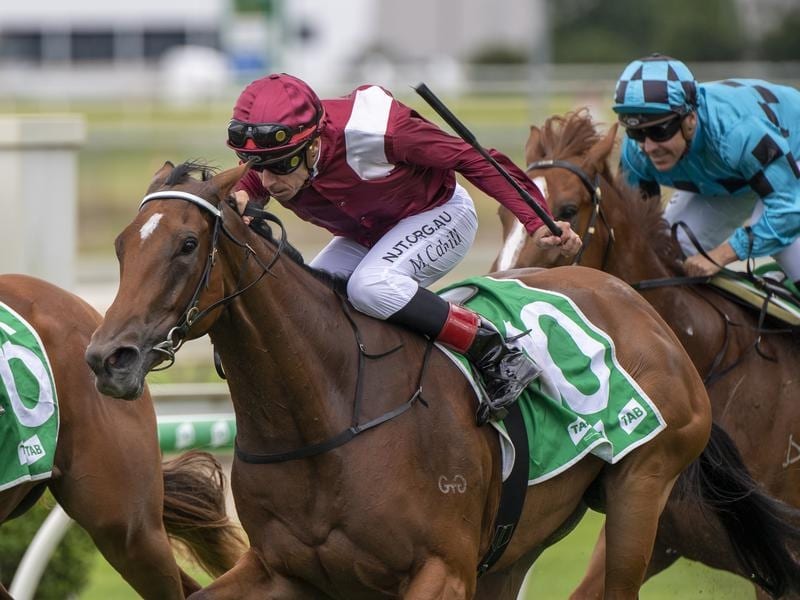 The Robert Heathcote-trained Minjee has given Brisbane jokey Michael Cahill his first win in his comeback from a three-month injury-enforced break.

Cahill has been back in the saddle for three weeks and rode Minjee in Saturday’s QTIS Two-Year-Old Handicap (1200m) at Doomben.

The filly drifted from $7 to $12 but came from last to grab the heavily backed favourite Snappy Reply ($1.80) on the line.

“She isn’t far off my top horse Rothfire and I have been telling everyone that for months,” he said.

“At her first start she had no luck at all after being caught very deep.

“I have said she is up there with my better two-year-olds and she showed that today.”

The trainer was at the January Magic Millions sales last year when Minjee was passed in for $150,000.

“I really wanted her so I ran around the corner to grab her breeder Ron Gilbert,” Heathcote said.

“Lucky I have been playing a lot of golf to get fit because Steve Morley from Glenlogan Park ran just as fast.

“We met in the middle with Ron and agreed to take 50 per cent each.”

At her first race start Minjee started $1.28 but was trapped four-deep most of the way and finished third.

Heathcote had been considering a winter campaign for the filly but with the carnival scrapped because of coronavirus he will now look at the upcoming revised programs.

“Michael (Cahill) told me when he got off that Minjee is a stakes class filly,” Heathcote.

“I am very pleased to provide Michael with his first winner back.”