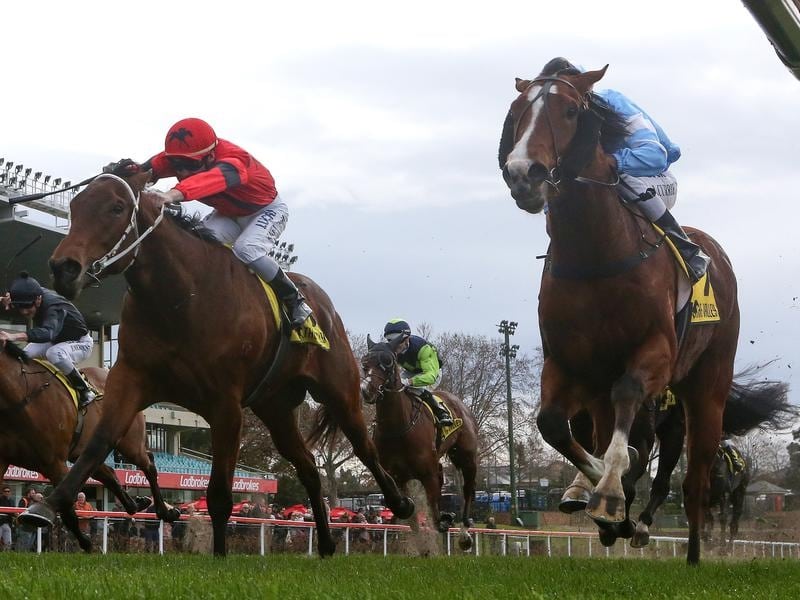 The Brent Stanley-trained Mig Energy has made an immediate impact in his first race appearance with a stylish win at Moonee Valley.

Mig Energy ran in two barrier trials earlier this year before being gelded and Stanley said the three-year-old had come back a smart horse, impressing in a recent jump-out.

With Luke Currie aboard in Saturday’s Essendon Mitsubishi Handicap (1000m), Mig Energy ($16) was behind horses in need of clear running at the top of the straight but when a gap appeared he sprinted quickly.

Favourite All In Brawl ($3.30) made his run on the outside to burst to the front before Mig Energy drove through on his inside to beat him by a neck.

Jimenez ($10) was another length away third.

Stanley indicated Mig Energy would be given his chance to try to progress towards the Caulfield Guineas (1600m) in October along with stablemate The August who is unbeaten from two starts.

“A horse like him and The August, that’s where they go towards and fingers crossed they keep improving and are good enough,” he said.

Currie was also impressed by the performance.

“He was strong,” the jockey said.

“He just jogged in behind them and I couldn’t hold him slow enough.

“He probably overdid it, if anything, but showed a great turn of foot when he got the run.”