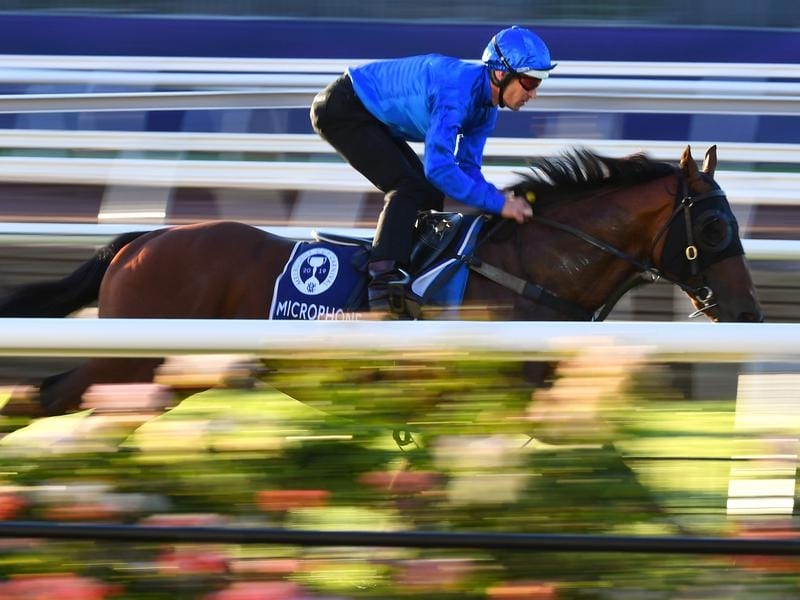 Group One-winning colt Microphone has been scratched from the Coolmore Stud Stakes at Flemington with the Godolphin operation left to rely on favourite Bivouac in the $1.5 million race.

The James Cummings-trained Microphone was ruled out on Friday afternoon because of an unsatisfactory result after a routine blood test.

His withdrawal leaves a field of 14 for Saturday’s Group One 1200m-straight-track sprint for three-year-olds with Microphone’s stablemate Bivouac the $3.30 favourite.

“He destroyed them in the Vain Stakes first-up this campaign and he’s gone on with it to vindicate that Group One performance and win a Golden Rose,” Cummings said.

“The Coolmore is another challenge for the horse.

“He’s going to have to handle the straight track for the first time. He’s got some excellent opposition. He meets the filly Libertini who was at one stage after her first-up run being touted as an Everest contender.

“And Exceedence has been sauntering around Flemington looking pretty good fresh-up from the Golden Rose placing, and that form has looked outstanding when we watched Yes Yes Yes win in the Everest.”

Bivouac was given a look down the straight in a light piece of exercise on Tuesday morning.

“The real benefit of that hit-out will come when the pressure goes on on Saturday. He will know where he is and what needs to be done,” Cummings said.