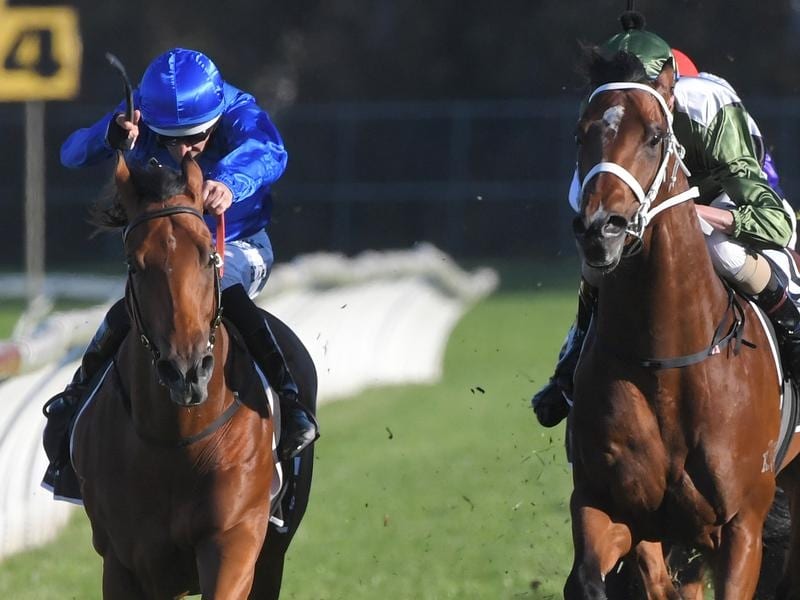 After watching Bivouac work at Flemington, Godolphin trainer James Cummings says the star colt is likely to be given his chance in the Coolmore Stud Stakes.

The final field will be declared for Saturday’s Group One 1200m-sprint for three-year-olds on Wednesday.

Bivouac was expected to win last Friday night’s Manikato Stakes at The Valley having taken out the Golden Rose at Randwick at his previous start.

But the colt was on the fence with nowhere to go from barrier one at The Valley and took no part in the finish.

Cummings said Bivouac was not out to make time in his work on Tuesday morning with the stable making sure he had come through the Manikato without any problems.

The work-out gave Bivouac a look at the Flemington straight.

“The thing with Bivouac is how he came through the night on Friday night and having been locked away on the rail I was not surprised on Saturday and Sunday that he had pulled up so well,” Cummings said.

“He’s been climbing the walls and we brought him here for some light exercise down the straight in even time and he looked beautiful doing it.

“He looked good in his work and while he had a look at the outside rail, it will be good when the pressure goes on on the weekend that he’s seen that straight and he’s a fraction more familiar with it than a horse that hasn’t.”

Bivouac will be reunited with Golden Rose-winning rider Hugh Bowman on Saturday.

Microphone is a two-time winner on the Flemington straight track and resumed with a third placing in the Roman Consul Stakes at Randwick on October 12.

Cummings said Doyle was in Melbourne to ride the Charlie Appleby-trained Cross Counter in the Melbourne Cup.

“He’s not only able to ride some of the big horses from overseas but he’s able to jump in and help us when we’re in need,” Cummings said.

“We might end up with two horses in this race when we expected to have one in.

“With his straight track experience and his strong riding skill, we’re happy to have him on Microphone.”