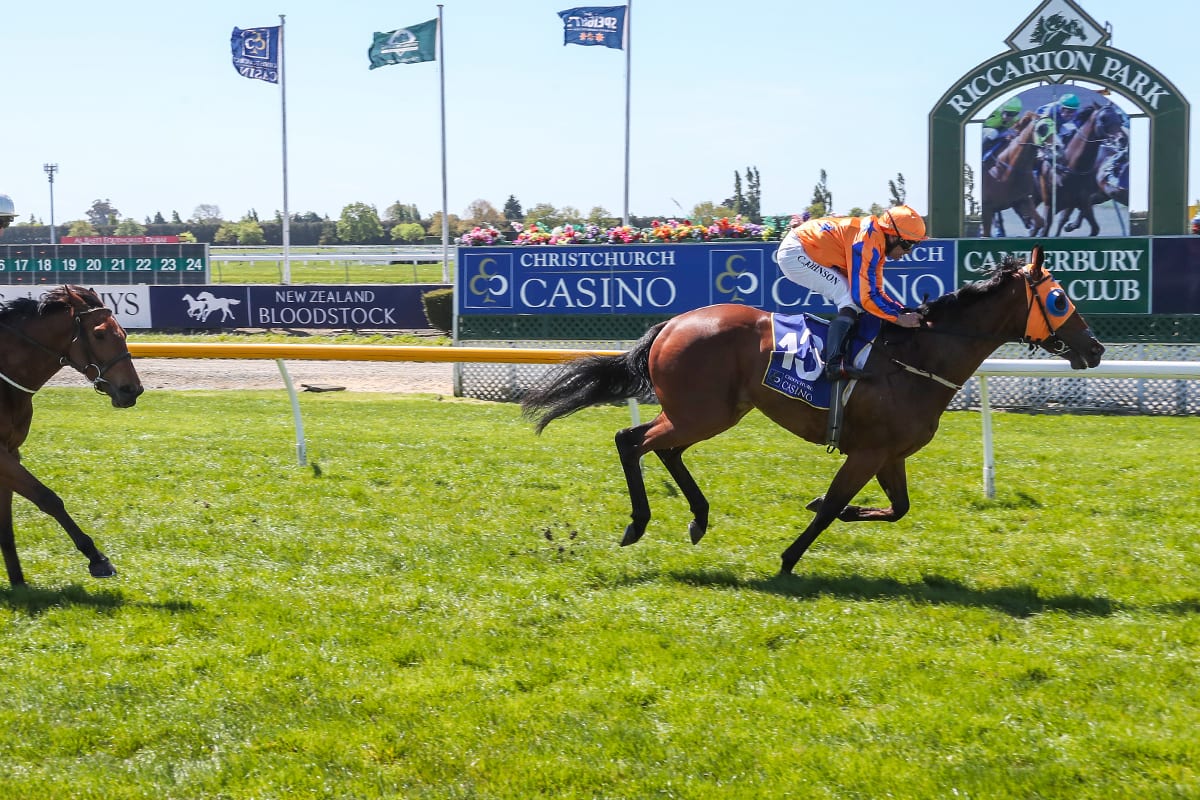 Exaltation, a three-year-old half-sister to star mare Melody Belle, turned in an impressive debut victory when winning the Helston & Associates Maiden (1200) at Riccarton on Saturday for trainer Jamie Richards.

A $900,000 yearling purchase at Karaka by Te Akau principal David Ellis, Exaltation looks to have inherited a fair dose of the family ability, extending nicely under a patient Chris Johnson ride to win with plenty in hand. “That was a good win from a filly that we’ve always liked,” Richards said. “She was an expensive yearling that copped an injury as a two-year-old, which held her up and we’ve had a frustrating run of hold-ups with her.

“She trialled okay in July, but never appreciated the heavy winter ground and we gave her a bit of time. But, she’s through all the hold-ups now and can only continue to improve. We thought she was a 1000 Guineas (Group 1, 1600m) filly, but unfortunately we just ran out of time and we’ll just go quietly now. “The team in the South Island has been through a frustrating period, but I’d like to thank Dad (Paul Richards) and the staff for continuing to do their utmost and hopefully the weather will be in our favour from now on.”

Richards suggested a likely target could be a three-year-old 1400m race on the middle day of New Zealand Cup and Show Week at Riccarton. “She’ll come home after that and we can get her ready for races on the other side of Christmas,” he said. “She could well be a very nice filly in the making.”

Te Akau principal David Ellis had the distinction of buying Melody Belle as a yearling at Karaka, and following inspections was keen to purchase her half-sister, from the draft of Haunui Farm, at the 2018 New Zealand Bloodstock Book 1 Sale.

Both fillies were bred by Marie Leicester and Exaltation is raced by the Te Akau 2018 Fabulous Fillies Breeding Syndicate. “I’m absolutely thrilled for the people that invested in my fillies syndicate,” Ellis said. “Since we bought this filly, Melody Belle has won eight Group 1s. So, as you can imagine she’s got fantastic residual value. But, it’s a hell of a bonus to see her come out and win under a stranglehold.

“The magic man (Chris Johnson) doesn’t ride very much for Te Akau, but, boy, he’s got a great strike rate for the team over the years. “It was a great thrill to see her win on debut. We’ve got two other nice fillies for the syndicate and just haven’t had any luck with them, but their day in the sun will come. The syndicate has been so patient and for them to be rewarded with the win gave me the biggest thrill I’ve had for a long time.”

Exaltation is a daughter of Not A Single Doubt and comes from the famed Belle family, fashioned over generations. “I’ve been watching fillies from this family racing for the past 40 years,” Ellis said. “Their breeders, the Sarten family, and their daughter Marie Leicester, have always done a fantastic job and are really good horse people.

“She was a standout filly from the moment I saw her at Haunui Farm, a stunner. She took everything in her stride at the sales complex and never turned a hair. “I opened the bidding at $800,000. The first time I’d ever done that, but I knew there were a lot of people that were on the filly at the sale and I thought my only chance of getting her was to be very strong. I bought her for $900,000, but, the real bonus has been Melody Belle winning a further eight Group 1s since then.”