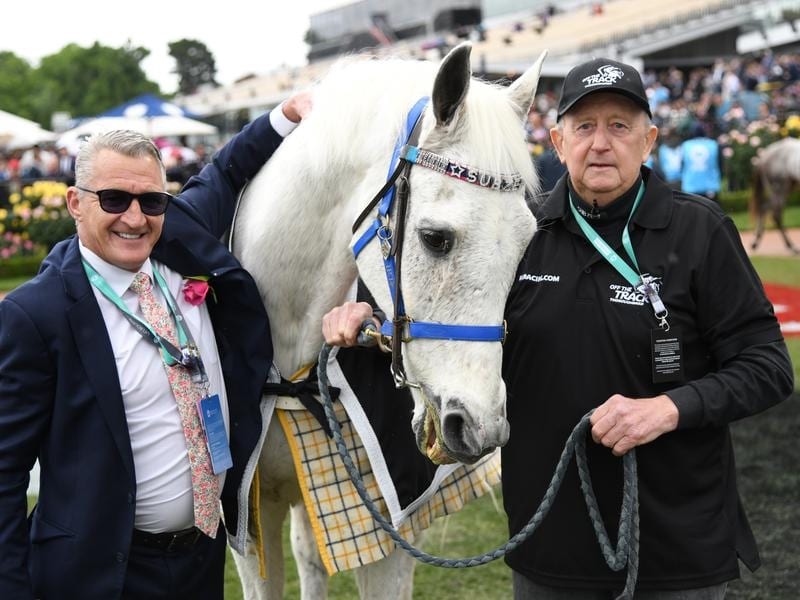 Subzero, the 1992 Melbourne Cup winner who achieved even greater recognition in retirement, has died at the age of 32.

Popular with rank-and-file racing fans as one of the best-performed grey-coloured horses of the Australian turf’s modern era, Subzero became an equine celebrity when his racing days were over.

Accompanied by his best mate and personal valet Graham Salisbury, Subzero remained a familiar sight on racetracks as a clerk of the course horse.

But for all of the $2 million Subzero won as one of Australia’s best thoroughbred stayers during the early 1990s, the goodwill he created through charity work will be forever priceless.

He was adored by people from all walks of life as Salisbury proudly toured his champion around Australia with regular guest appearances at hospitals, nursing homes and schools.

Subzero was trained by Lee Freedman and as a four-year-old he became the toast of a nation when he surged through a rain-affected Flemington track to win Australia’s greatest race.

The triumph turned out to be the last of his six wins.

But Salisbury ensured the horse who affectionately became known as “Subbie” would never be forgotten as one of racing’s greatest ambassadors.

“There can be no better example of the friendship and love between a man and horse than Graham Salisbury and Subzero,” Mrs Elliott said.

“Together they brought joy and happiness to so many, from racing fans of all ages to the wider general public who had never even seen Subbie race.

“Sadly we lost Graham a few months ago and there is no doubt in my mind that Subbie, at the ripe old age of 32 years old, wanted to be where Graham is.”