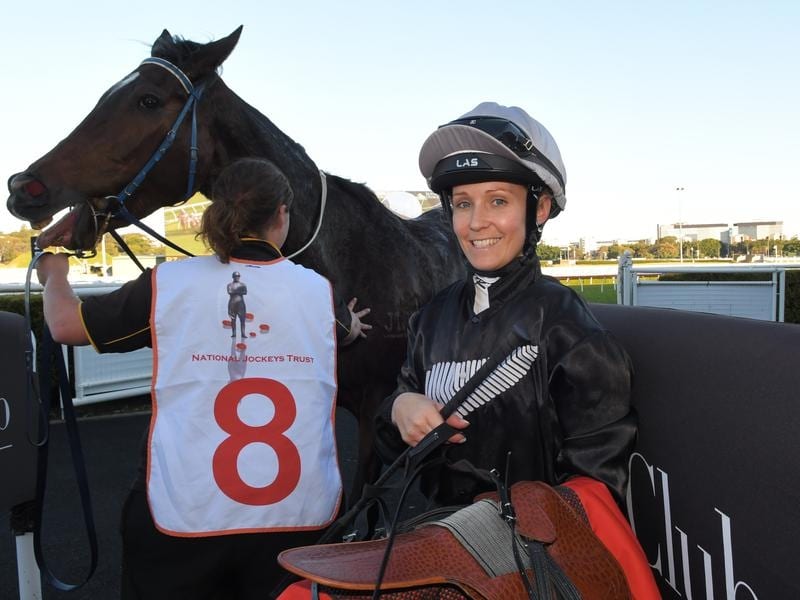 On a day celebrating jockeys past and present, Rachel King has made her mark on the new season with a winning double at Randwick.

After steering the Joe Pride-trained La Chica Bella back to the winners’ list, King took out the Jockeys Reunion Handicap (1300m) aboard Bangkok for Allan Denham.

Before the race, jockeys riding at the meeting joined more than 60 former riders to remember those no longer here.

Sydney’s champion apprentice of 2017/18, King finished last season just outside the top 10 Sydney jockeys with 29 winners including Maid Of Heaven in the Group One Spring Champion Stakes.

Her win on Bangkok came in John Thompson’s distinctive black colours with a silver fern representing his native New Zealand and worn to victory by Diatribe in the 2000 Caulfield cup.

“I had to let her go at the top of the straight I was travelling too well,” King said.

“She is a very amenable mare and it’s great to ride winners for Mr Thompson who has been a great supporter of mine.”

While King celebrated her double, Kerrin McEvoy took the overall honours with a winning treble.

McEvoy, who is the president of the NSW Jockeys Association, rode Misteed for Peter and Paul Snowden, Roheryn for Godolphin and the David Pfieffer-trained The Party Girl.

Roheryn recorded his third win from four starts, and although trainer James Cummings would not be drawn in to spring goals, the four-year-old is in the market for the Epsom Handicap as a $26 chance.

With spring racing around the corner, McEvoy will head to Gosford on Monday to ride Redzel in a barrier trial.

The Snowden Racing-trained Redzel has won both editions of The Everest with McEvoy aboard and will be having his first test since a less than stellar autumn carnival.

McEvoy also has the Les Bridge-trained Classique Legend as a possible Everest mount.