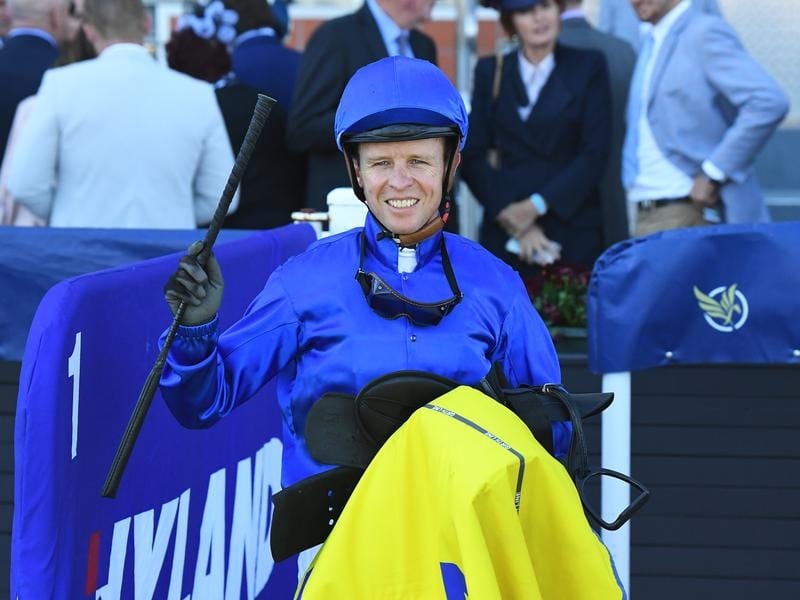 Jockey Kerrin McEvoy has put Melbourne Cup mount Cross Counter through his paces at Werribee in preparation for the $7 million race at Flemington.

It was McEvoy’s first ride on the Godolphin-owned stayer, describing the hit-out as a sharp piece of work.

“He sat in behind Folkswood and did it stylishly,” McEvoy said.

“He moved up nicely over the last two furlongs (400m) and gave him a good blow.

“He galloped out nicely and I was pretty pleased with how he felt.”

Cross Counter had been under an injury cloud after cutting a foreleg that required box rest and light walking duties for seven days before his work was stepped up over the past week.

McEvoy said the missed work wasn’t ideal but he had been assured by trainer Charlie Appleby and travelling foreman Chris Connett the gelding was ready to go.

“You’d prefer it not to happen but he seems nice and well and bright so you can’t worry about that now,” McEvoy said.

“You just have to focus on the job at hand.”

Cross Counter will enter Tuesday’s final field of 24 as the least experienced runner.

He’s raced just seven times, for four wins, with his last start being a narrow second over 2400m at York in August.

“He looks very genuine and he feels as though he’s been around the block,” McEvoy said.

“He doesn’t ride as though he’s a young horse.

“He’s very switched on and willing and I’m hoping that puts him in good stead.

“Sure you’d like for him to have had 20 starts but he’s had seven and that’s why he’s got in with a nice light weight.

“He might just be ahead of the handicapper, you don’t know.”

Cross Counter shares the second line of betting at $11 with Magic Circle in Tuesday’s Cup with Yucatan remaining a $4.50 favourite.