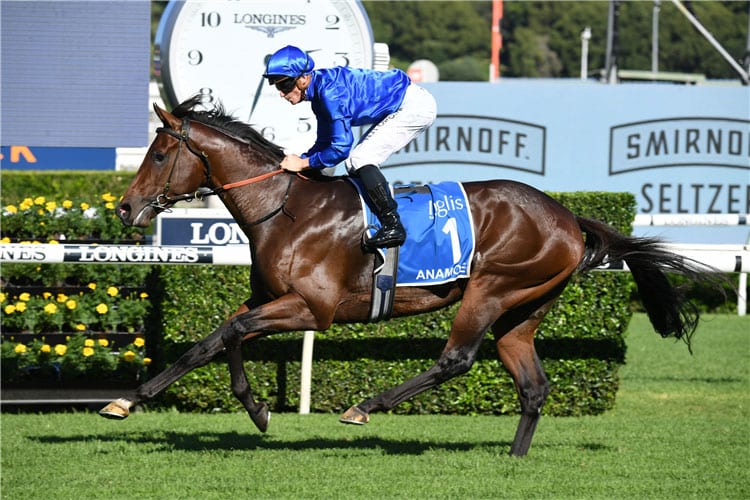 James Cummings was left wondering what might have been after Anamoe’s slashing second from a wide draw in the Golden Slipper, but the colt has swept that disappointment aside with a breathtaking performance at Randwick.

The Godolphin head trainer admitted he was crushed when the youngster came up with the outside gate in the Slipper, all but cruelling his chances.

“It was the most disappointing part of his preparation, the ten seconds it took to absorb the barrier draw just put him out of play,” Cummings said.

“He’s not a go-forward two-year-old that can overcome a wide draw in the Slipper but the run in the Slipper was that of a very good horse. Swap the gates with the winner, things get interesting.”

Cummings didn’t have to wait long for the son of Street Boss to secure his Group 1 as the -111.11 favourite annihilated his rivals in Saturday’s Sires’ Produce Stakes (1400m).

He exploded to the front halfway up the straight, prompting James Mcdonald to throw an arrogant look back over his shoulder and ease him down to score by 2.75 lengths over Hilal (+1200) and Captivant (+1800).

It was McDonald’s 50th top-level victory and he has reached the milestone faster than any other jockey.

“I’ve been very lucky with the support I’ve had through the 12 years I’ve been here, it’s been marvellous,” McDonald said

“Obviously, I have so many people to thank but it’s this horse’s day in the sun.

“He is the Rolls Royce of two-year-old racing.”

Cummings confirmed plans to press on to the Champagne Stakes with Anamoe, provided he pulled up well.