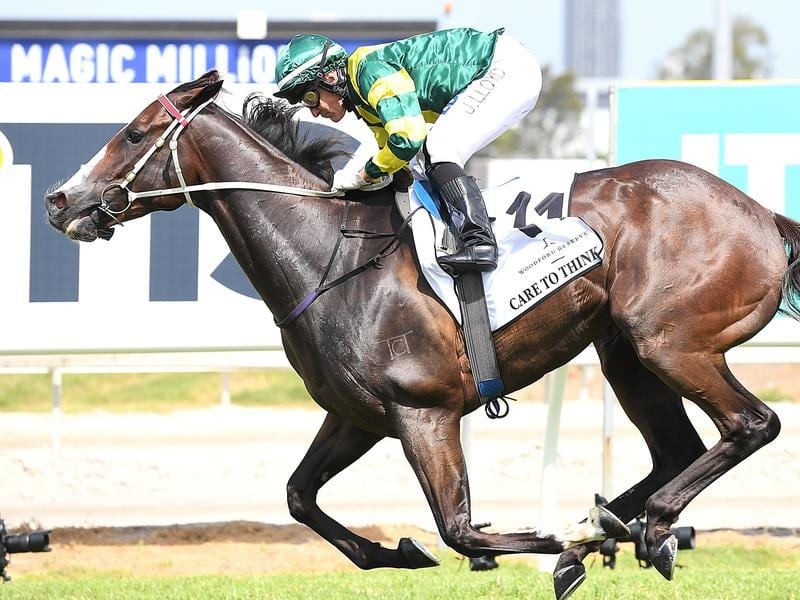 Smart sprinter Care To Think has been well beaten in a Doomben barrier trial but trainer Matt Dunn is more than happy with his effort.

The gelding was ruling favourite for the $1 million Kosciusko at Randwick on October 13 until he was ruled out with an elevated temperature.

Dunn eased off him with the Brisbane summer in mind and Tuesday was his first serious hit-out.

Care To Think was second last early in the 1000m-trial before coming four and five deep from the 700m.

He eventually finished third behind the handy No Annamossity who led all the way.

Dunn said the trial had been a good hit-out and Care To Think would now press on to the Group Three George Moore Stakes on Saturday week.

“He did exactly what we wanted and that should have him ready for Saturday week,” Dunn said.

“We can go two weeks at a time into trying to win the Magic Millions Cup two years in a row. There is also the option to miss a week somewhere in there.”

The Dunn-trained handy three-year-old The Fire Trap finished fourth in his trial which slightly disappointed the trainer.

“He is a bit behind in his work and we might skip running him on Saturday week to give him another trial,” Dunn said.